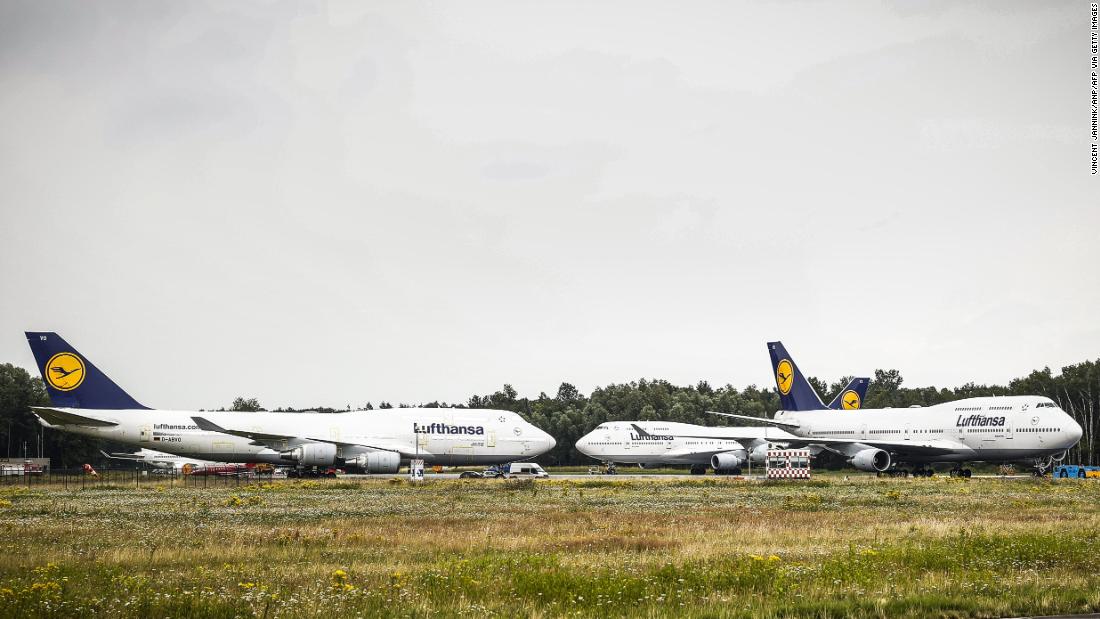 (CNN) — Six Lufthansa Boeing 747-400s landed at Twente Airport, a small Dutch air hub in the northeast of the country, back in the summer — but then were stranded for months.

The aircraft were taken out of service due to the German airline’s reduced flight schedule in the wake of the Covid-19 pandemic and arrived at Twente over the course of June and July.

As soon as the planes landed on the airport’s tarmac, they were rumored to be heading for demolition.

Sure enough, five of the six aircraft were later sold to aircraft recycling firm GE Aviation Materials, based at Mojave Airport in California.

But there was a catch — the Netherland’s Human Environment and Transport Inspectorate (ILT) forbade the planes from leaving Twente.

So commenced a complex negotiation process, with the stalemate eventually resolved last Thursday.

Pictured here: the sixth Lufthansa Boeing 747-400 arriving at Twente Airport back in July.

Prior to this resolution, the ILT told CNN Travel that the planes couldn’t depart because Twente Airport didn’t have the right safety certificate.

At Twente, larger jets — like Boeing 747s — are currently permitted to land for purposes of demolition, but can’t take off.

Tiny Twente Airport is home to just one runway. Previously used for both civil and military aviation, the airport has been for commercial use only since 2007, also describing itself online as “the ideal location for business aviation.”

“The airport’s infrastructure is momentarily not suitable for the takeoff of larger and heavier aircrafts,” an ILT spokesperson told CNN Travel last Wednesday. “Nor has the aerodrome operator requested for permission to deviate from the international safety rules. This can pose security risks.”

Lufthansa told CNN Travel that when the airline landed the six Boeing 747s back in the summer, larger jets were permitted to take off for non-commercial and storage reasons.

The dispute was set to be resolved in court with a lawsuit between ILT and Technology Base, the airport hub, but a compromise was reached: The ILT granted “a one-off exception” allowing the airplanes to leave. The ILT said there were are some safety requirements that must be met — namely that the 747s carry “little fuel” and that the “aircraft must be light.”

“Both parties agree that the current state of affairs cannot be repeated,” ILT said in a statement last Thursday. “Lufthansa aircraft can thus depart from Twente Airport. The first aircraft will leave shortly.”

“We welcome this agreement,” a Lufthansa spokesperson told CNN Travel on Thursday.

Many airlines were already planning to retire the Boeing 747, dubbed “the Queen of the Skies,” from their fleets, before the coronavirus pandemic further accelerated this exit.

British Airways, for example, retired its final Boeing 747 airplane in October 2020, months ahead of schedule.

A popular airplane with pilots and passengers alike, the 747 is widely being replaced with newer and more efficient jets.