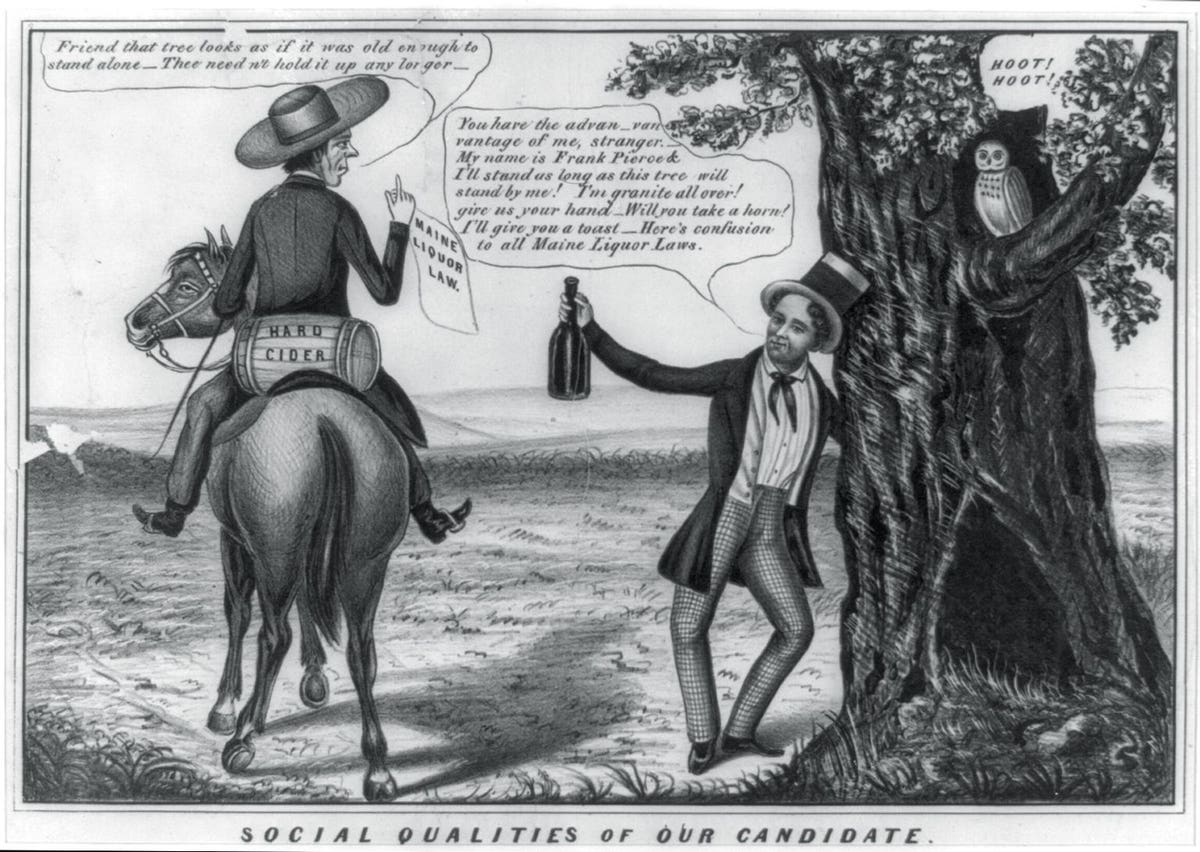 This Election Day, you might need to—and now you can, thanks to a new book detailing the habits of America’s imbibers in chief.

Hey, America how are your nerves today? If you’re on edge, you’re not alone.

Last month The American Psychological Association reported 77% of Americans say the future of the nation is a significant source of stress, with anxiety over the current political climate a major stressor (68%). Those numbers are up by 11 and 6 percentage points over 2016.

It’s too bad the APA didn’t survey American’s drinking habits leading up to the election. What a trove of data that might yield!

But, just in time for Election Day, someone did survey the drinking habits of presidents. It’s not exactly new ground—volumes have been written about our Colonial oenophiles-in-chief, George Washington and Thomas Jefferson, who kept record of their purchases and penchants. But to date, no one has tackled such a comprehensive volume as Wine and the White House: A History, by Frederick J. Ryan Jr., and published last month by the White House Historical Association. The author is one of the consummate Washington insiders: chairman of the board of the WHHA, which provided many of the images, and publisher/CEO of the Washington Post.

What else is new: specially commissioned new photography of the White House glassware collection, published here for the first time. Objects and ephemera from Ryan’s personal collection are also included, making this truly a first in the annals of presidential drinking books. The author spent two years researching and writing the coffee-table-worthy book.

Weighing in at just over five pounds, Wine and the White House begins with George Washington (a Madeira fan) and ends with Donald J. Trump (himself a nondrinker, but whose state dinners featured America-first selections).

Not surprisingly, pages devoted to the well-traveled Jefferson, who served as a foreign diplomat, make for the most interesting biography. His preferences were diverse—even exotic—for the times, with orders for wines from Hungary (Tokay), Italy, Spain and Portugal. He was also a spendthrift, spending $3,200 annually, equivalent to $70,124 in 2020. Jefferson detailed his purchases, and Ryan includes a couple of pages of his notes (above), which, if you can decipher, make for fascinating reading. He also summarizes the famous Hardy Rodenstock scandal in the 1980s over the sale of Château Lafite bottles with purported Jeffersonian provenance. (What other president can make the news some 154 after his death?)

The presidential wine biographies are only a portion of the book, which includes descriptions of selections and service by various White House wine stewards and social secretaries; and the evolution of preferences from storied French vineyards and other European regions to the California upstarts—the latter are now legends in their own rights. With contributions from wine royalty such as Robert Mondavi, Pierre Lurton, Philippe Sereys de Rothschild and Katharina Prüm, the book serves somewhat like a “Who’s Who” of wine. But it’s also inclusive of the up-and-coming, such as Jean Case of Early Mountain Vineyards in Madison, Va.

For those interested in decorative arts, the chapter on the White House service collection is pleasurable eye candy: extravagant pitchers, historic etched stemware, decanters and coolers (guess they didn’t call them buckets). The chapter devoted to presidential toasts is less inspiring, but if he wins re-election, Trump would find some good fodder here in case he wants to make nice with some world leaders.

The menu section more than makes up for the speeches: Indeed, this is my favorite part of the book. The earliest menu dates from an 1877 dinner hosted by President Rutherford Hayes and is current through fall 2019 with the Trumps. Reading descriptions of the dishes not only worked my salivatory glands, but provided a history of fashionable dishes, available ingredients and customs at various times of war and other significant national events (for example, during the Depression, dinner cards weren’t printed so as to conserve paper). In addition to the fancy printed menus, typewritten drafts contain hand written notes on the wines, services and seating, showing, perhaps, the whims of visiting dignitaries. One can imagine!

There are some fun nuggets here: Legendary social secretary to Jacqueline Kennedy Letitia Baldridge writes a reprimand about serving rosé wine with fish—“totally inappropriate” she typed—and I was tickled to find a menu for a Truman-hosted dinner served on the same date as my birthday. Predating me by a decade, the Trumans entertained the Prime Minister of Italy with boozy cocktails and sparkling Burgundy. And the typography is fun to look at, too, paralleling trends in fonts (calligraphy a popular choice for several presidencies). Not surprisingly, menus from the Trump era feature elaborate scrolls, swirls and serifs.

The final chapter catalogs the vintages of all wines served. Here too, you can see the evolution of tastes, the rise and fall in popularity of regions and styles, and who liked what.

In addition to his own collection Ryan sources illustrations from the White House archives and other government sources, supplemented by historic images from photo agencies and private collections.

It’s a fun bipartisan read for the times. And without no debate: we could all use that.

Published by the White House Historical Association and available online at the WHHA shop; $55

White House Historical AssociationWine and the White House: A History