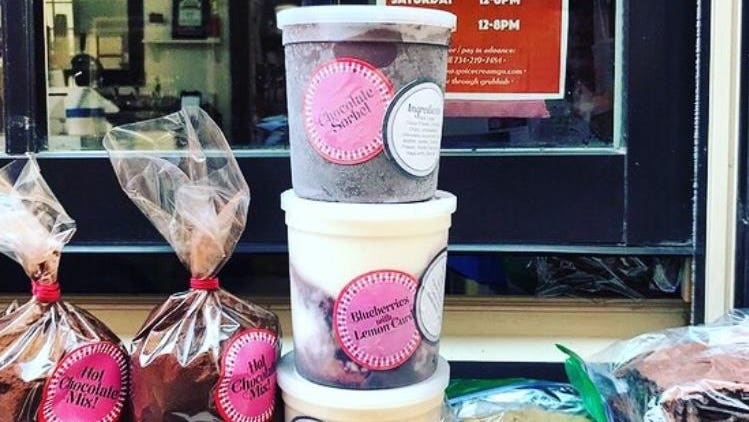 Chicago has already closed restaurant dining rooms in the face of surging COVID-19 cases. London is about to do so. How are food places going to survive in the face of a second shutdown?

I recently told you how Go planned to sell ice cream during winter months, when people are less interested in buying ice cream.

Along with that, Go owner Rob Hess made some significant changes in his approach — and is seeing surprising success as a result.

His business plan might not apply to restaurants that depend on table service, and it might even be difficult for places that sell prepared foods.

But, as Hess explained in an email to customers last week, it’s worked for him — and there could be some hints for other small businesses in what he’s done.

As it’s been doing since spring, Go will continue to sell pints, ice cream pies, cookies and other pre-packaged treats to go.

They can be ordered ahead and picked up at his store window in an alley downtown on Saturdays. His products also are available at seven local markets.

But he will not open the sit down areas of his shop until at least March, even though Michigan’s COVID restrictions allow him to offer partial seating.

Hess decided that’s not worth the potential danger.

“While I look forward to the day when I can offer you a sample of ice cream or a banana split in person, I won’t do it at the expense of risking the health of Go! workers,” Hess wrote to his customers.

He’s exploring additional ways to sell his products, including indoor pick up or curbside service, pick-up appointment scheduling, delivery, or even shipping.

The good news is that Go is enjoying so much pre-packaged business that it can now afford to offer health care coverage to its four full and part-time employees.

“You might be surprised to learn that we weren’t profitable enough to do this before,” he wrote.

“The truth is, when COVID hit, Go Ice Cream just starting to hit break even daily financials, and we were struggling to pay back about $40,000 in debt. I won’t mince words: We were in trouble.”

Initially, Hess decided to handle the workload himself, then brought back three other employees.

“The combination of selling only pints, which increased our average ticket price significantly, plus vastly decreased staff costs, meant we were actually profitable for the first time ever,” Hess says.

“I put every dollar into paying off debts, and through a combination of grants and lots of 80-hour work weeks, I was able to decrease our debt load to near zero.”

And, he learned a valuable lesson about the way he wanted to run his business.

“Working in the kitchen by myself, getting back to what I loved to do (i.e. make delicious, flavor-filled ice cream) also gave me time to think and reflect,” he wrote. “The world had changed, my awareness had changed, and I came to realize I would never go back to running the store in a way I had never intended.”

Before COVID, Go was achieving his dream of a community space, with fundraisers and events as often as possible.

But that, plus running the shop, was stressing out everyone involved.

“Now, thanks to our new business model, all this has changed. It’s a strange silver lining, but COVID has, in a way, allowed us to be a better, stronger, healthier business for everyone,” he wrote.

“Our pints-only, grab-and-go model, forced on us in a pandemic, has made us better than ever. Who could have guessed?”