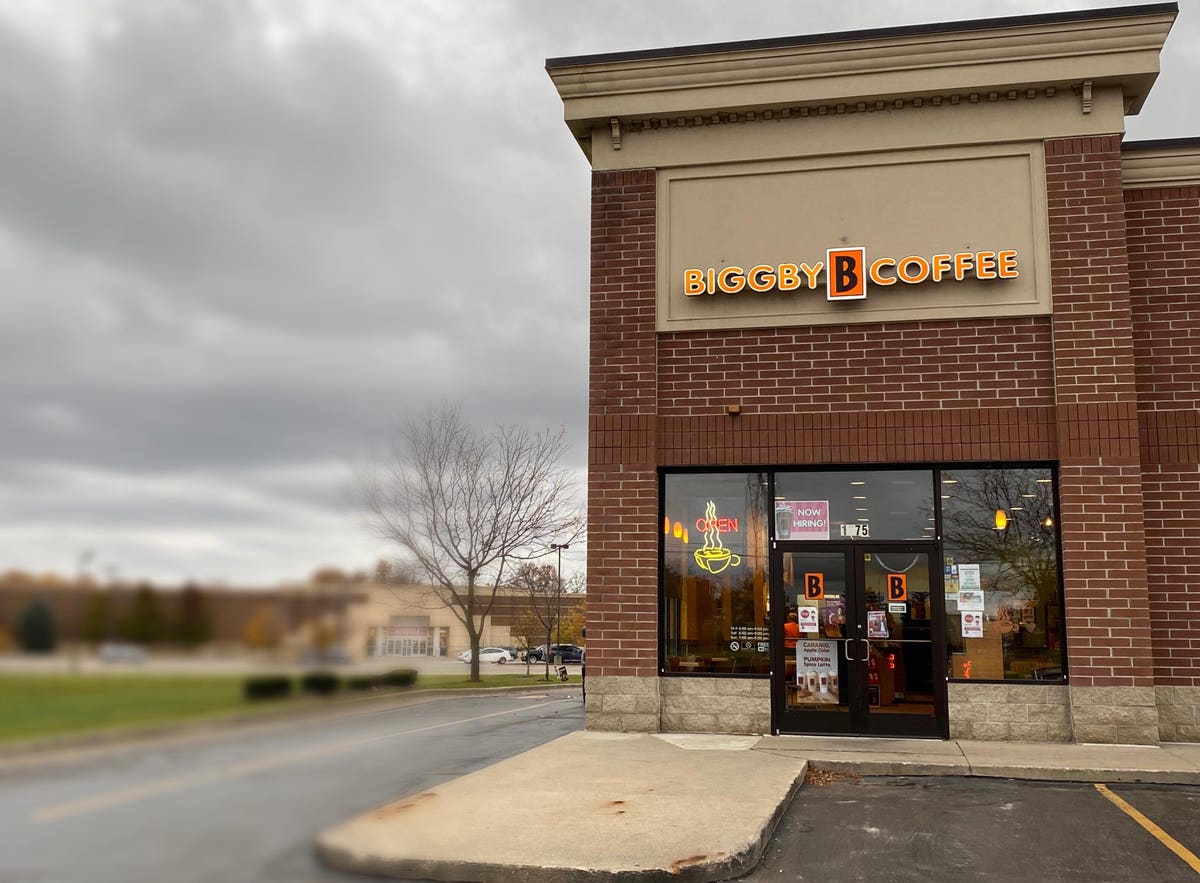 As baseball pitcher Satchel Paige once said, “don’t look back because someone could be gaining on you.” The two mega-coffee chains in the U.S, Starbucks and Dunkin’ may just be hearing footsteps from Biggby Coffee.

Despite its being a moderate-sized coffee chain, it’s growing faster than you can say, “Latte please.” It currently has 243 stores but has a whopping 103 locations in development. It could be closing in on 350 outlets, if it all materializes.

The key to its rapid growth, despite the pandemic putting a question mark on most expansion, is its franchising prowess. Every one of the current Biggby Coffee locations is franchised as are the forthcoming ones in development. Hence, franchising rules at Biggby Coffee.

It’s concentrated in eleven states including Michigan, Indiana, Kentucky, North Carolina, Florida and New Jersey. So unlike Starbucks, it doesn’t blanket the country but it’s heading west and branching out into Arizona and Idaho.

Even though the pandemic closed numerous Biggby Coffee outposts for a time, it has about 70% of its store operating indoors. About 50% of them currently offer third-party delivery to boost sales.

Its CEO Michael McFall, who is based in Lansing, Michigan, is quite clear about why it can grow quickly despite a pandemic. “Our sales are through the roof,” he exclaims. He says its drive-thru sales, including a recently new modularly built drive-thru, are spiking revenue.

“People are more comfortable staying in their car,” during a pandemic, he says. Hence, the spike in drive-thru revenue.

He acknowledges that the pandemic has contributed to a rise in construction costs of new sites. “Materials are more expensive, and things are slower,” he says, which could stretch out when a new location can open.

Furthermore, the franchise owners play a major role in ensuring the safety of their customers and employees. Many of them “have invested their life savings in the store. Making people feel safe is how they maintain their revenue,” McFall states.

Since its business model is franchise only, with no company-owned outlets, it has local reps who visit the stores to make sure consistency rules. “Going rogue is a slow process and doesn’t happen overnight. And we get instant feedback from customers online,” if something is going awry, McFall cites.

Besides its specialty coffees, hot chocolates, iced teas and pastries, it’s known for bragels, a breakfast egg and cheese sandwich.

Many of its franchisees are former customers who sense the conviviality of each Biggby Coffee’s location. “That’s where we get the lion’s share. They love the business and product and think ‘I’d rather be here doing than what I’m doing now.’” he says.

Moreover, many of its franchisees are empty-nesters, who want to build something for their retirement. Their children are often the same age as Biggby’s employees and they know how to relate to them.

One compelling attraction of becoming a Biggby Coffee franchise owner is its lowered cost compared to its competitors. “Our cost is dramatically lower than other franchise models. We’re worked hard to keep the investment low,” he adds.

McFall doesn’t see Dunkin’ as a competitor because it doesn’t offer specialty coffee. And he finds Starbucks appeals to “pretentious” customers who want to figure out its nomenclature.

“When you walk into Biggby’s, you feel it’s family and you have a friend behind the counter,” he says. Baristas are trained not just to introduce themselves and know their customer’s name, but get to know their kids’ names and whether they root for the Detroit Lions or Dallas Cowboys.

His goal for Biggby Coffee is to become “the specialty coffee for middle America. We’re your everyday coffee shop.”