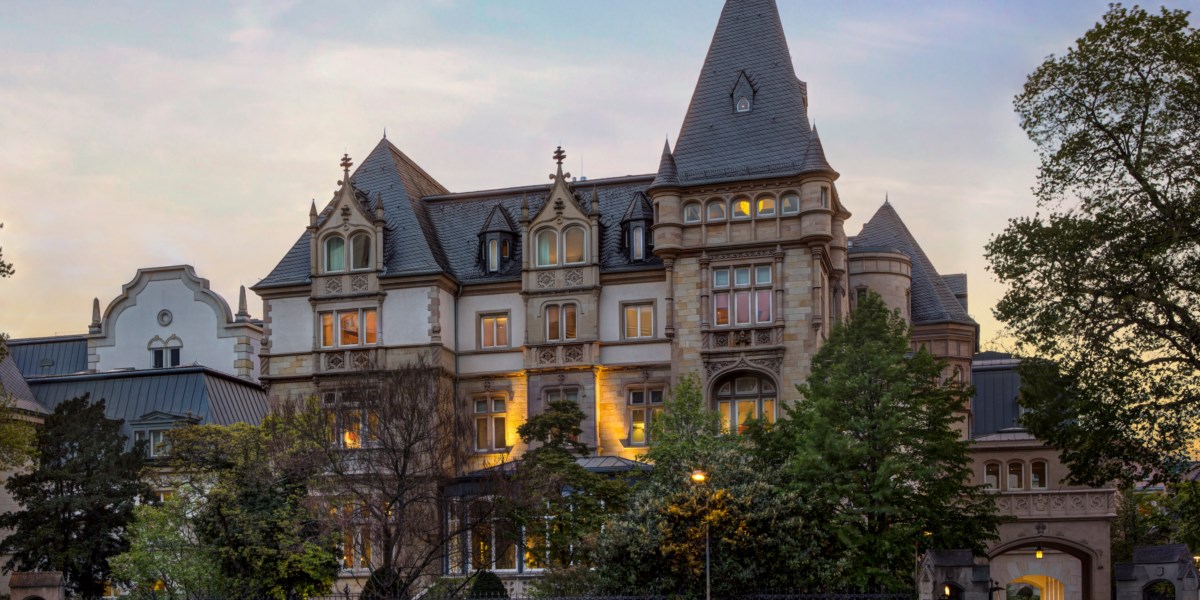 Frankfurt is one of the main financial centers of Europe. There are skyscrapers filled with multinational corporations, banking conglomerates and it just happens to be the center of the European banking system and the Euro. This city is located along Germany’s Rhine River and offers so much more than an international business hub. It is a city that is also rich in culture with fantastic museums, sights to see and things to do. One of Europe’s most grand hotels is the Villa Kennedy and it’s the perfect respite for enjoying all that Frankfurt offers the worldly traveler. 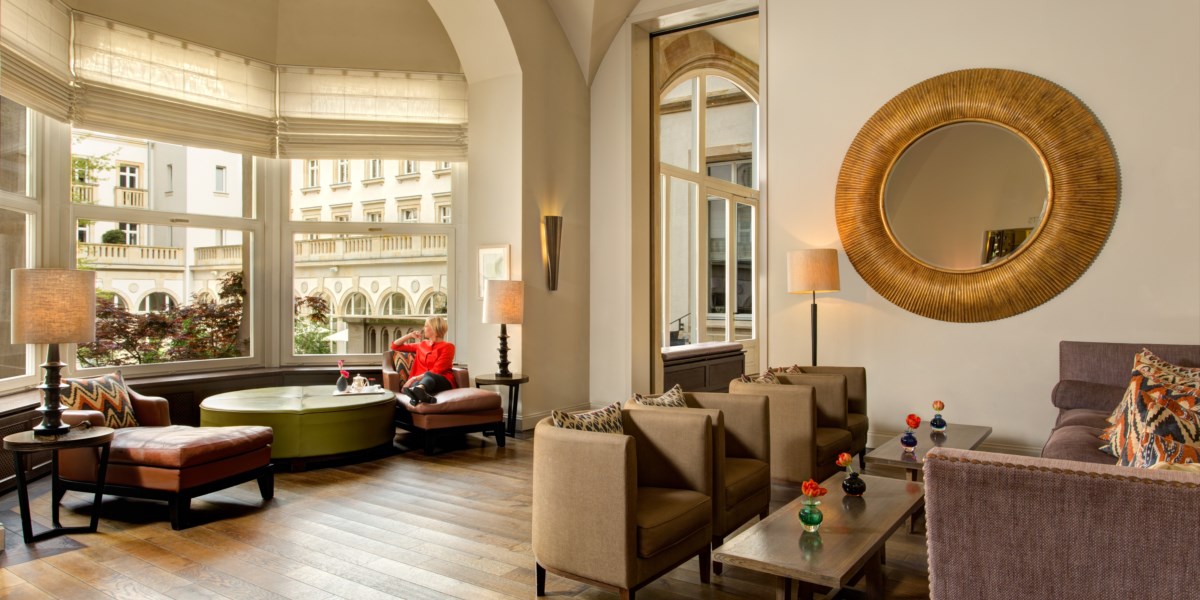 Located amongst the tony riverside mansions, Villa Kennedy, a Rocco Forte hotel, was built at the turn of the century by one of Frankfurt’s well-to-do aristocrats, when Germany was at the height of its imperial empire. From afar, it appears as an exquisite estate with Gothic and Renaissance design elements, an ornate facade, steep slate roof and castle-like turrets. The hotel, as the street of its address, was renamed Villa Kennedy after the 1963 Frankfurt visit of then President John F. Kennedy and his tragic death a short time thereafter. 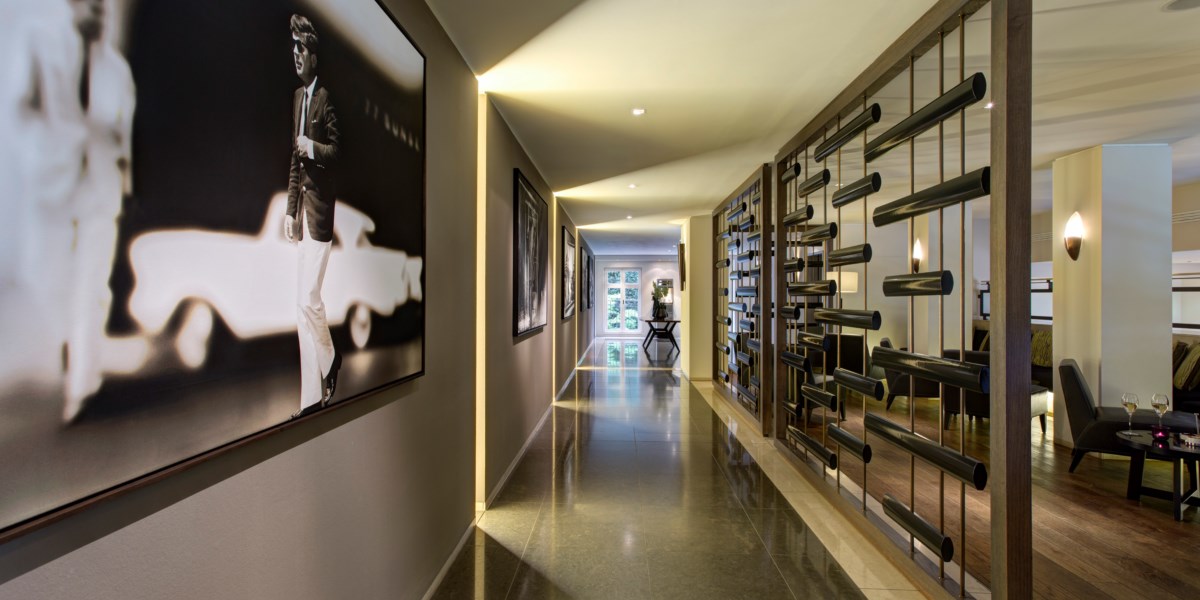 The hotel was completely refurbished and expanded in 2006 with respect for the historical significance of the original 1901 structure, while integrating all the conveniences and amenities necessary for today’s traveler. The interior areas are chic with modern furnishings and cool artwork including images of ’60s and ’70s-era icons Marylin Monroe, Jimi Henrix, Bob Marley and Freddie Mercury. And, of course, the villas name sake, JFK. 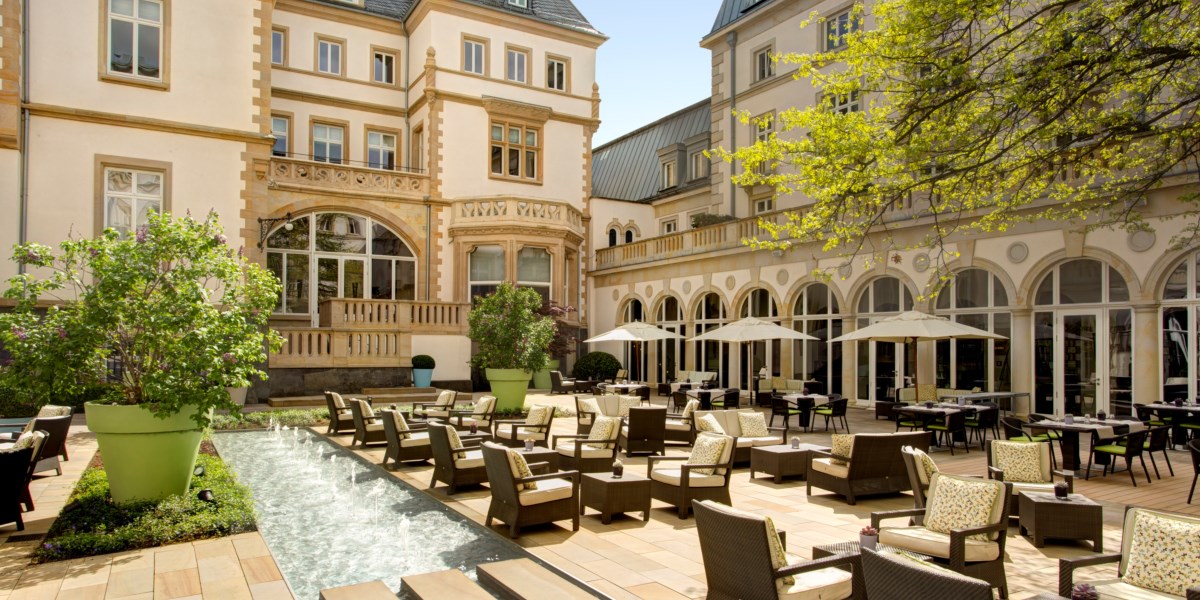 The hotel was built with three sides facing a grand courtyard in the center which is one of the many aspect of the hotel that guests fall love with. In the warmer month, guests dine on bistro tables under the large canvas umbrellas as water fountains trickle nearby. As peaceful and relaxing as the setting is, it’s hard to believe that just on the other side of the building is Frankfurt’s bustling city life. 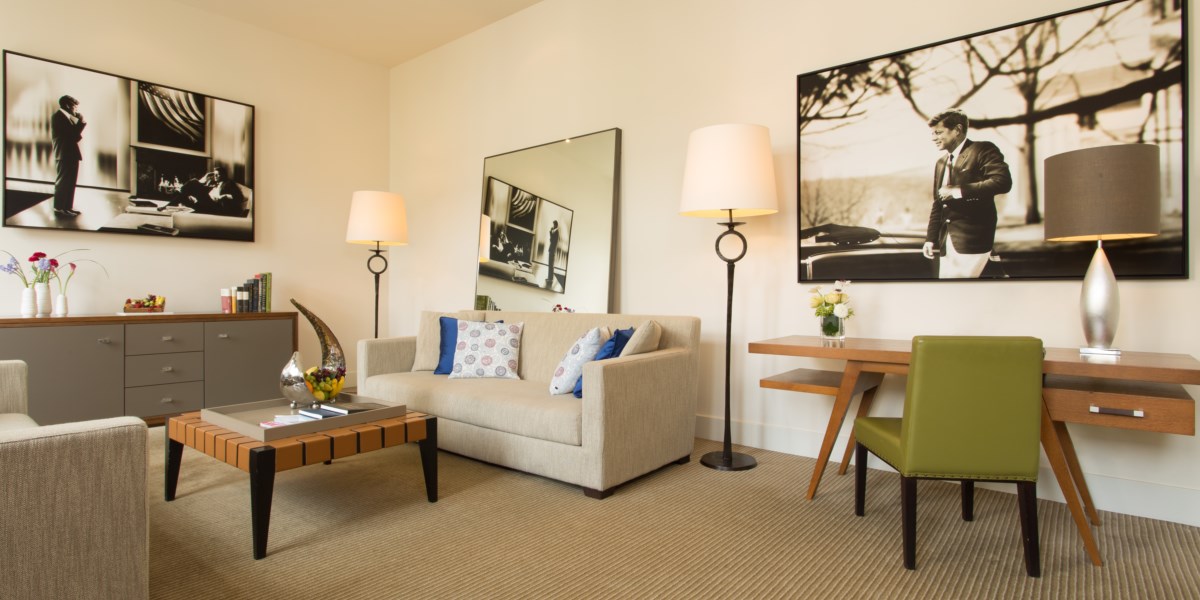 The hotel has 163 rooms and suites, yet the property has a very boutique feeling about it. The rooms and suites are spacious and elegant with contemporary décor and artwork, high-tech electronics, and marble bathrooms with a separate shower. The suites are generous in size with many having balconies that overlook the courtyard. 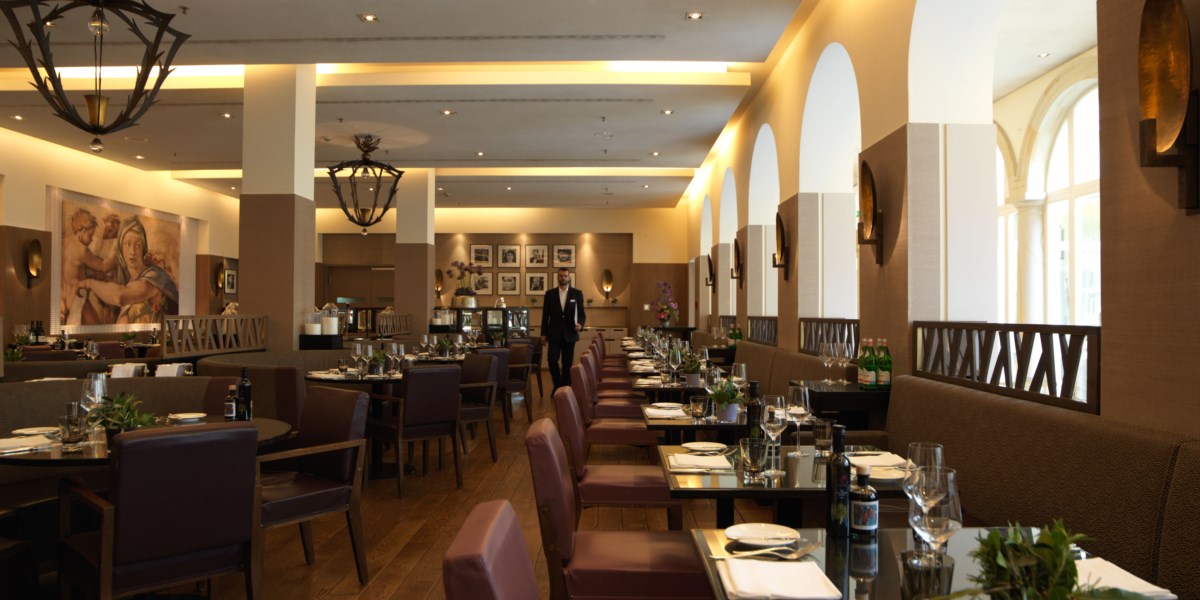 Rocco Forte is an Italian luxury hotel brand known for their excellence in accommodation, services and, of course, dining. The Villa Kennedy follows this tradition of innovative Italian gourmet dishes with its Gusto Restaurant. In the warm season, guests dine by candlelight alfresco in the courtyard on their Mediterranean-influenced signature dishes such as the Ravioli Grüne Soße or fish of the day cooked on a Himalayan Salt Stone. Indoors is equally as exceptional with Italian fresco-influenced wall art, a cozy setting and first-rate service. 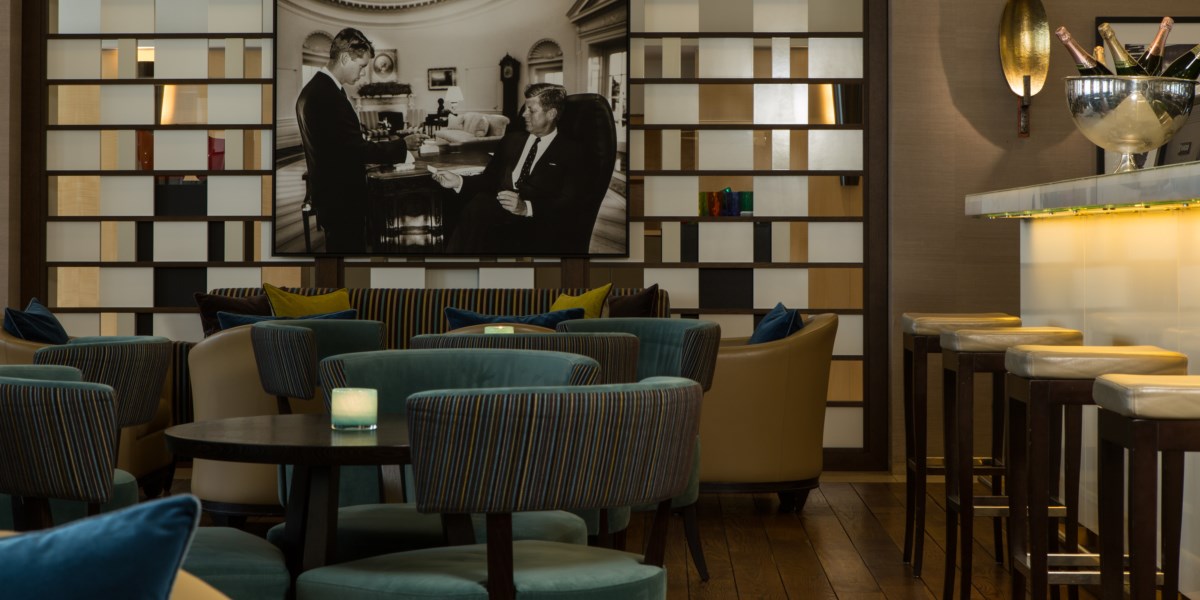 The Villa Kennedy is also the place to go for a sophisticated bar environment. At the JFK Bar, their mixologist creates unique and inspired cocktails, as well as serving premium cognacs, whiskies and fine wines. 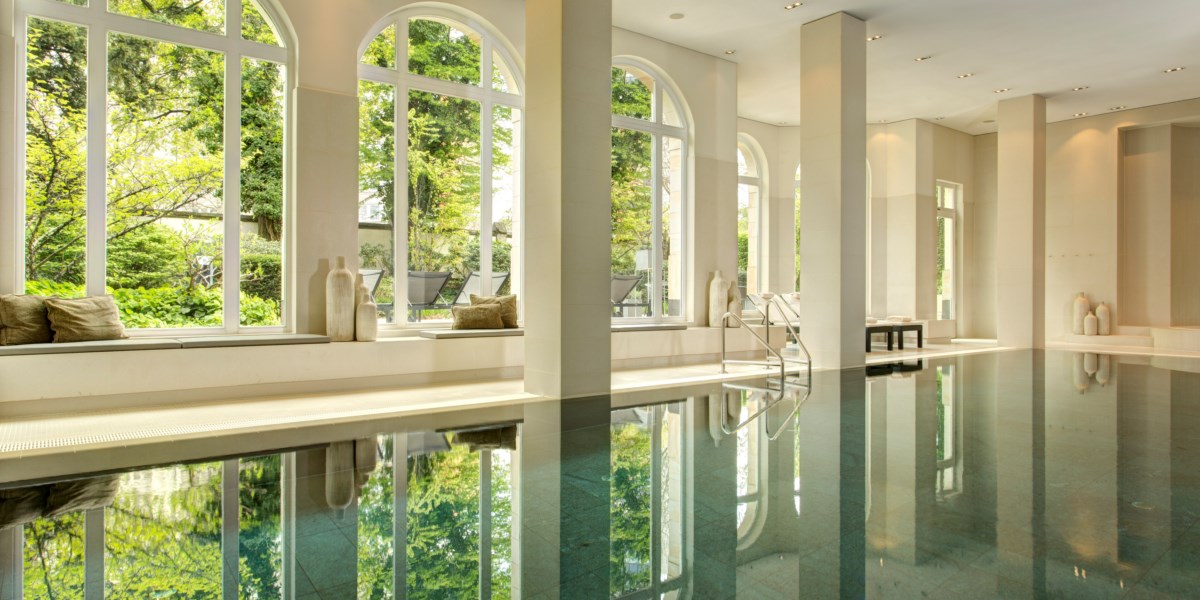 The hotel provides a pampering environment to relax and unwind after a long day of high-stakes business dealing or navigating the areas museums and sights. Their destination spa has been created to soothe those worn out bodies, and features an indoor swimming pool, Jacuzzi, sauna and steam room. There are eight treatment rooms and their team of highly-trained spa therapists provide a range of 120 treatment services from health to beauty. The spa also features a state-of-the-art fitness studio with all the latest equipment. 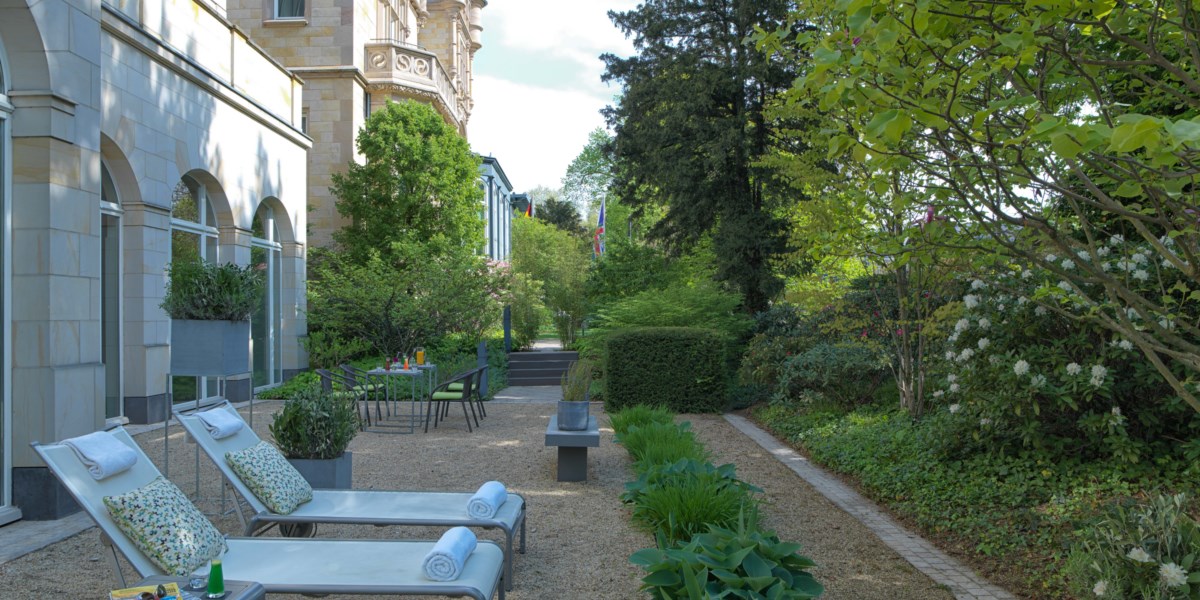 There is so much to see and do in the area, most of which are a short walk or tram ride away from Villa Kennedy. Two short blocks from the hotel is the Rhine River. It’s the perfect place to go for a walk, jog or bike ride; sit along the river watching boats, or stroll over a bridge and make a promise to your loved one by leaving a lock along the bridge. 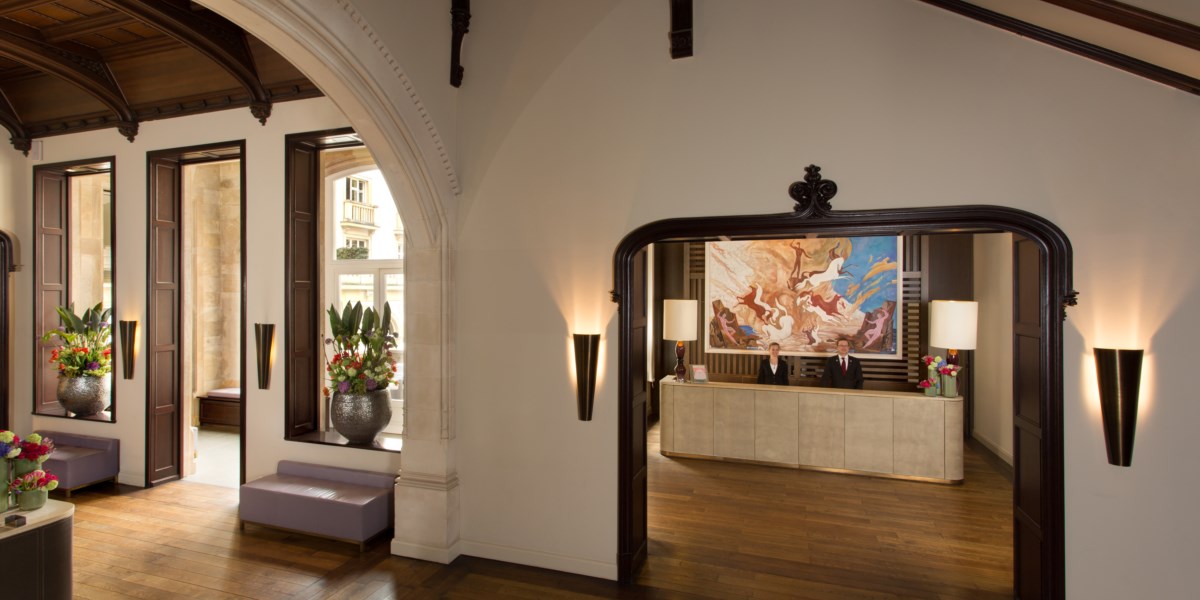 Hotel guests can take the short wander to visit the Museumsufer, which is the area where many of the city’s top museums and galleries are located. Art enthusiasts will love the Stadel Museum, which is known for its 14th century to modern art collections, Renaissance paintings, and its Picassos and contemporary collections. Also not to miss are the Deutsches Filminstitut and Filmmuseum and the lovely art galleries throughout the district. 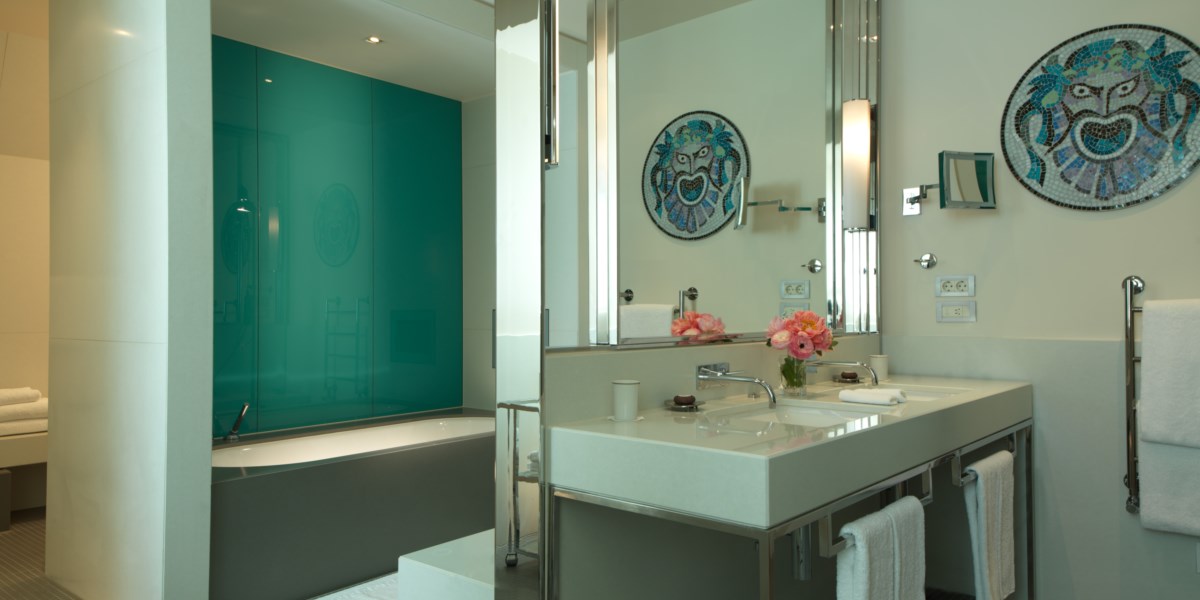 Other exceptional sights to see include the impressive churches, such as as the towering, red sandstone Gothic architecture of St. Paul’s Church, a visit to the Frankfurt’s botanical garden, the PalmenGarten, or take in a play or classical music concert at the Frankfurt’s premier theater, the Alte Oper or Grand Old Opera.

There are also numerous malls and boutique shops in Frankfurt providing the latest fashions for the area’s well to do. There are a number of upscale shopping malls to explore as well as the high end boutique district, the Brückenstraße.

Frankfurt is one of Europe’s beautiful riverside cities with so much to see and do. The Villa Kennedy, a Rocco Forte hotel, provides the perfect, refined accommodations and services to take advantage of all this wonderful city has to offer.

Unwind at The Westin Riverfront
Congrats, Clif Bar! Its Sale To Mondelez Boosts Our View That This Is ‘The ESOP Decade’
TorfhÃs Retreat: Icelandâs Secluded Haven of Hospitality
Boeing delivers 35 planes in May as it grapples with supply chain problems
20 of the best outdoor swimming pools and lidos in the UK