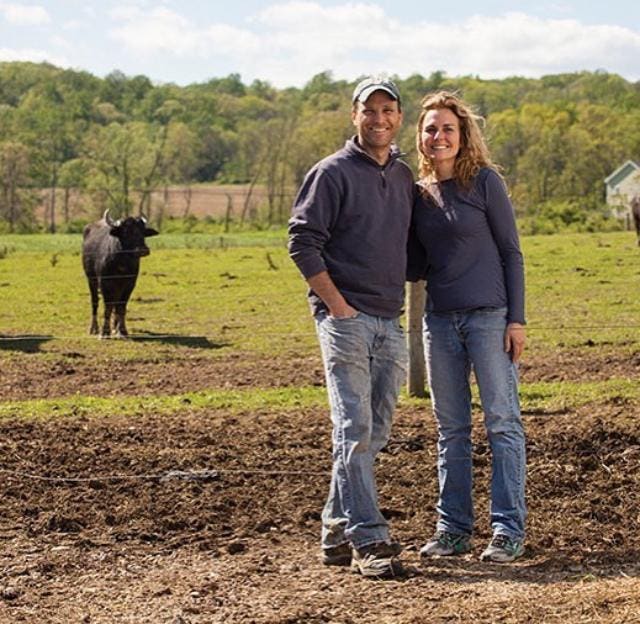 According to Courtney Foley, co-owner with her husband Brian Foley of Riverine Ranch, which owns 175 water buffaloes of the Riverine species on 165 acres of land, they are a misnamed breed.

When the European settlers traveled to North America and dedicated themselves to freedom, they confused buffaloes with bison. So water buffaloes should really be called water bison.

Regardless, the products that these water buffalo produce such as milk, yogurt, cheese, ground meat, sausage, and even ice cream, are particularly high in nutrients such as calcium, protein and grass-fed fat.

“Our products are particularly creamy because of the high butterfat,” Courtney Foley explains.

Located in Asbury, New Jersey, near the Pennsylvania border, Riverine Ranch has five employees who perform the farm work, produce the cheese and execute sales.

But the Foley’s were concerned about where our local food was coming from, how much of it was shipped from overseas and wanted to do something about it. Hence, they acquired Riverine Ranch in 2010.

Their goal is to “revitalize the New Jersey’s dairy industry,” Courtney Foley asserts.

The land was purchased from the New Jersey Conservation Authority and can only be used for agriculture, which enabled them to buy it at a reduced price, explains Brian Foley.

Its location interested them because it was in proximity to New York City and Philadelphia. “We can produce milk that is sought after, and people are interested in grass-fed meats. They can produce fantastic milk that you can’t buy elsewhere,” says Brian Foley.

The Foleys made major career switches to operate this farm. Brian had been a union electrician, and Courtney an elementary school teacher.

As they mastered their trades, local farmers and purveyors such as cheesemakers, pitched in and helped mentor the couple in various skills.

Dairy products constitute 70% of its sales and meat 30%. For example, some of its cheese products include brie, washrind cheese, and Italian mozzarella. Its meats include grass-fed steaks, ground meat and sausage.

For those who aren’t farmers, the female water buffaloes produce the dairy products and milk, and the males, the meats.

While many restaurants saw their sales plummet because indoor dining was prohibited and people dined out less, sales at the Riverine Ranch remained steady during the pandemic. It lost some restaurant customers and gained new ones from people dining more at home and shopping more at farmer’s markets.

Brian Foley says many Italian restaurants are attracted to its mozzarella cheese because it’s made with the milk of water buffalo. That’s the way mozzarella is made in Italy.

“All of our products are made on the farm. We are passionate about bringing local fresh food to our customers,” Courtney Foley notes.

It’s much healthier dining on local products than having cheeses shipped from Europe, which is environmentally unsound, Brian Foley points out. Hence farm-to-table restaurants have proliferated across the country.

Though they’re a profit-making company, their aspirations extend beyond dollars and cents. Most of its profits “go back to the farm. We’re building up our herd,” cites Brian Foley.

It’s certified by River Friendly, which promotes clean water and healthy practices, and entails not putting any additional stress on the water buffaloes, and operating in an environmentally-sound way.

To grow the business, Brian Foley said it would take selling more products directly to consumers, via mostly online and adding more local markets. And he could envision, long-term, selling some products in supermarkets.

“The growth in the water buffalo market is huge,” says Brian Foley, and it’s just beginning to take off.

The adventurer twins exploring the most remote parts of the world
The airplane seat with headphones installed into the headrest
Nepal may move Everest Base Camp
CDC lowers the Covid-19 travel risk for 2 nations in Europe
‘The system is rusty’: Executives defend industry as airlines cancel scores of flights