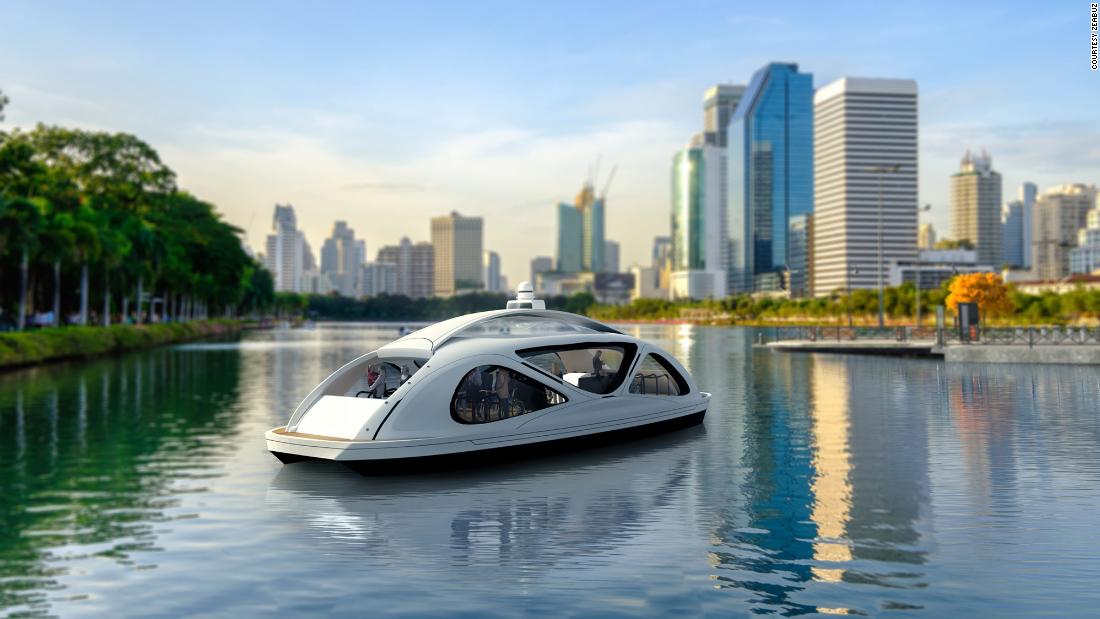 The small, autonomous ferry, which launches next year, works “like an elevator” says Erik Dyrkoren, CEO of Zeabuz, the company building and operating the boat.

Passengers on each side of the canal that separates the port and city center can press a button to call the boat to their side. The boat charges while it waits at the dock, fits up to 12 passengers as well as bicycles, and takes less than 60 seconds to make the crossing — saving pedestrians a 15-minute walk.

The ferry was developed in 2018 by researchers at the Norwegian University of Science and Technology (NTNU) as an alternative to a proposed bridge across Trondheim’s harbor canal. The prototype was a hit and NTNU commercialized its research, forming Zeabuz in 2019. It’s part of a larger movement exploring how to use waterways for more sustainable transport.

Around the globe, more cities are turning to waterways for public transport. Bangkok plans to have 30 new electric ferries in service by next year along with 5,000 electric water taxis; New York’s ferry system is expanding to all five boroughs; and in July, Uber announced it will launch boat taxis along the River Thames in London. It’s a good way to optimize existing space, says Susanna Hall Kihl, an expert in waterborne transport and founder of Vattenbussen, a research and advocacy organization for urban waterways.

“Historically, that’s how we traveled,” says Kihl, highlighting that most major cities were built on or near water. Reviving underused waterways to relieve road congestion is an easy solution, she says, as it requires minimal infrastructure compared to other transport systems.

Norway has led the way on electric ferries. It launched the world’s first electric passenger and car ferry in Sognefjord in 2015, and has pioneered “new technologies and green fuels,” says Narve Mjøs, Director of DNV GL, advisers for the maritime industry and organizers of Norway’s Green Shipping Program.

Autonomous boats like Zeabuz are the next step, providing an alternative to land transport and making ferries more energy- and cost-effective, says Mjøs. Automation also improves operational efficiency, he says. Less energy is used, and without a crew or driver there is more space for passengers.

Roboat is a five-year project to develop autonomous ferries for Amsterdam’s canals.

Companies including Reaktor in Finland, SeaBubbles in France, and Roboat in the Netherlands are also testing the waters with autonomous ferries, and hoping to entice passengers to opt for water transport over land.

Well-established legislation governs safety on conventional passenger boats. However, in most countries, new rules have not yet been put in place for self-driving ferries — and this is a barrier to expansion.

Kihl says it will be easier to develop regulations in locations where the “power to decide is centralized,” but pioneering countries can help to set an example. She adds that connecting ferries with existing public transport networks is another key consideration, which will directly affect their adoption and usefulness. “We need to actually build this into the city,” she says.

The first prototype for Trondheim’s self-driving ferry was developed by NTNU and is called Milliampere, which means “little electric.”

Without a captain and crew, who are required for larger boats under Norway’s current safety regulations, Zeabuz’s operations are restricted to 12 passengers. Dyrkoren says this needs to change before the company can scale up, but he’s confident the “close cooperation between the regulators and the research community” in Norway will help get lawmakers on board soon.

Zeabuz is currently exploring safety protocols that tie in with existing emergency services, and Dyrkoren says the team is working to make the technology and safety systems “foolproof.” Zeabuz’s ferries use cameras with sensors to scan for obstacles, while a navigation system — similar to those used in submarines and airplanes — monitors the speed and position of the boat. Data is transmitted via 5G to a control center manned by a person, who would summon help in an emergency.

Dyrkoren emphasizes that “there will always be a human individual,” overseeing self-driving ferries. “Complete autonomy, where you leave the machines to themselves, is not really a scenario that anyone is talking about.”

The ferry will run as a free public service, says Eidet, adding that there is plenty of enthusiasm for the project.

Other Norwegian cities including Tønsberg, Sandefjord, and Haugesund have expressed an interest in Zeabuz’s boats, says Dyrkoren, and he thinks larger metropolises like London, Hamburg, and Paris could benefit from self-driving ferries.

Zeabuz says its self-driving ferry will be given a sleek, modern aesthetic, to match its advanced tech, in the next five years.

He envisions some cities offering the ferries as a free public service, to reduce road traffic and encourage pedestrians, while others might approach it as a monetizing opportunity

Either way, “it’s a fun way to move around the city and very in tune with future mobility,” says Dyrkoren. “It will be attractive to cities as they evolve.”