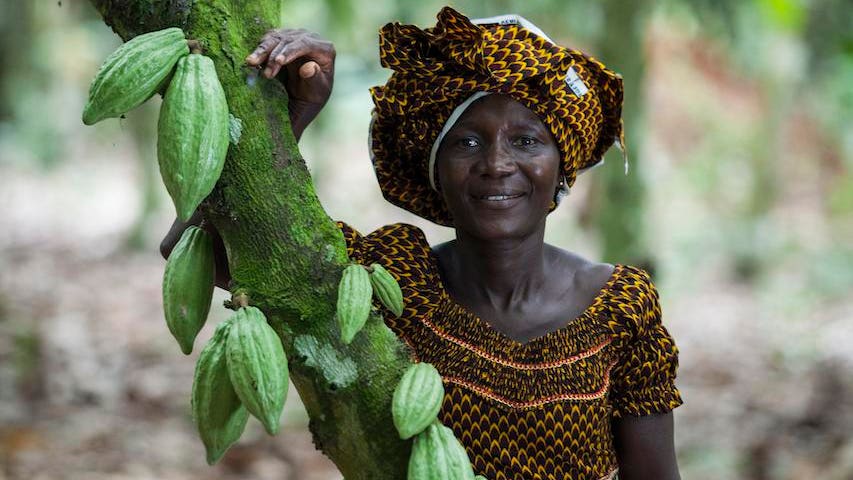 Vermont-based mega ice cream maker Ben & Jerry’s – seller of fan favorites like Chunky Monkey and Half Baked – has committed to paying farmers a living income for their cocoa beans in West Africa, a bold step in an industry that has shied away from making minimum payment commitments to farmers. Typically farmers are paid by giant food manufacturers and traders at the behest of the global commodity market, a price that does not factor in the cost of production, and leaves smallholder farmers in extreme poverty.

“Smallholder cocoa farmers have virtually no control over global market prices and are at the mercy of price volatility,” according to a statement released by Ben & Jerry’s today. “Inequality in the cocoa chain means farmers are trapped in extreme poverty.”

As a part of their commitment, 5,000 cocoa farmers in Côte d’Ivoire will receive an additional premium to compensate for low commodity prices, so that farmers can earn a ‘living income differential.’ These farmers grow cocoa volumes that are equivalent to what is used in all of the base mixes for Ben & Jerry’s ice creams, which was a $680 million global business in 2019. Farmers will receive an additional $600,000 premium, meaning an additional ~$120 per farmer per year, over the base price paid for cocoa.

More than 70% of the world’s cocoa comes from West Africa, with Côte d’Ivoire being the largest cocoa producer. Côte d’Ivoire’s 600,000 cocoa farmers live in dire poverty, which is further compounded by commodity price fluctuations, climate change, and a virus that is impacting cocoa tree productivity.

Ben & Jerry’s is partnering with Fairtrade America on the effort. Mary Linnell-Simmons, Director of Marketing & External Relations at Fairtrade, said, “The commodity price is not set with the livelihoods of farmers in mind. The commodity price in general contributes to many farmers around the world earning less than $2 per day and living in extreme poverty. The market maximizes profit at the end of the day, and farmers with least bargaining power are left behind.”

Low prices have been a recurring issue for cocoa farmers, and are often linked to malnutrition, forced labor, and deforestation in West Africa. For decades, leading cocoa manufacturers such as Hershey, Mondelez, and Nestle have made public commitments to address these issues. Still, low prices and dire poverty persists. The governments of Côte d’Ivoire and Ghana recently announced a 20% increase in the floor price paid to cocoa farmers. Ben & Jerry’s commitment, at $2.20/kilo, is an increase over the government floor price of $1.80/kilo. According to a coalition of NGOs, this living income differential is not adequate for farmers to achieve a sustainable living, and would require $3.16/ kilo, almost twice the government floor price.

Cocoa supply chains and financial flows are opaque. Cocoa beans and money can change hands over a dozen times, making it difficult for companies to trace the financial flows back to the farmers who grow the bean. According to a joint report by the African Union and the United Nations, cocoa is listed in the top 10 illicit financial flows in Africa, and generates over half of the illicit financial flows in Côte d’Ivoire. Ben & Jerry’s is placing their bets on Fairtrade America to track these flows. Ben and Jerry’s Chief of Social Mission Dave Rapaport, shares that “our Fair Trade cocoa purchasing is mass-balanced, so we don’t have traceability to the farm with our cocoa. We do have financial transparency through the Fairtrade Foundation, which could assure that the financial benefits are traced back to farmers.”

Rapaport says that a more holistic view is needed to make an impact on farmers. He shares, “There is a fairtrade premium, but that alone doesn’t get farmers to achieve a living income. Our [Ben & Jerry’s] model is based on crop productivity, diversification and price, underpinned by long term fair trade sourcing, and working with strong cooperatives in Côte d’Ivoire. We have a strategy to enable all of these interventions to work together. We are putting together many different programs that we hope get farmers to a living income. It is not just about the cocoa price.”

The company has a history of activism, and is used to taking a public stance on issues ranging from racial justice to climate change. Rapaport continues, “This is one further step on a longer term journey that will continue for us, we are really committed to helping the farmers in our supply chain obtain living incomes and we will be expanding those efforts to supply chains beyond cocoa.”