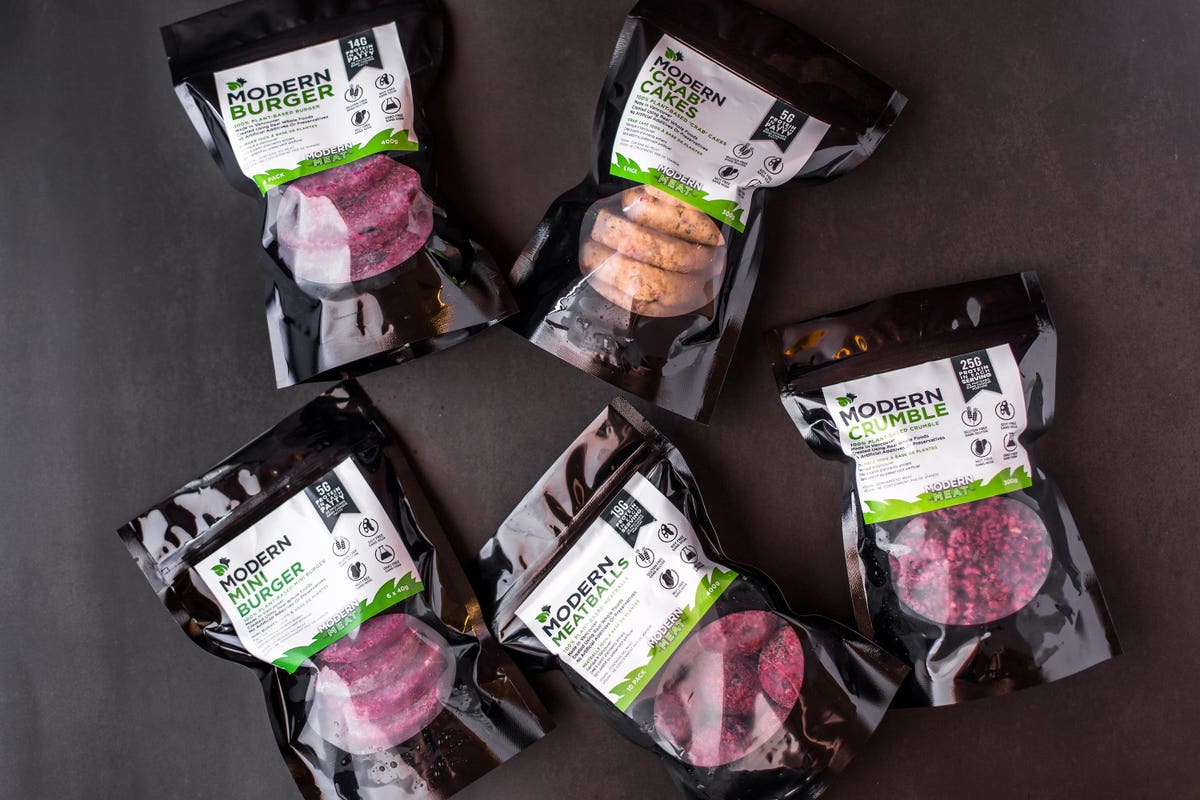 Just as home-grown plant-based heavyweights are actively expanding their footprints abroad, their international counterparts are also entering the U.S. at an accelerated rate, eying opportunities in the country’s fast-growing vegetarians and flexitarians.

While the ongoing pandemic is driving more consumers with concerns about environmental damage and animal cruelty to opt for plant-based alternatives, continuous efforts in perfecting the aroma, texture, and nutritious profiles of vegan meat are projected to further escalate the growth of the category, the market research firm notes.

Modern Meat, which was launched about two years ago in Canada and recently went public, says it plans to expand into a Los Angeles-based facility after experiencing significant revenues growth.

The facility will help co-pack for Modern Meat’s current products, including Modern Crumble, Modern ‘Crab’ Cakes, Meatballs, and sauces, and is expected to eventually complete the company’s domestic distribution.

“I feel like the whole West Cost does have that specific type of lifestyle that people want more plant-based foods; they are early adapters for [these products],” Modern Meat’s founder and CEO, Tara Haddad, recently told me via a Zoom call.

“We think our growth will be exponential… and we’re projecting more than $20 million in revenues [once our expansion is complete],” Haddad said, adding extra sales will also come from the food service sector as many U.S. mid-level restaurant chains are incorporating Modern Meat into their menus.

Haddad and her growing team envision Modern Meat to ultimately be a lifestyle company that offers a wide range of healthy products under its wing, which could make it more competitive than category incumbents — the very reason why the company scooped up a group healthy candy and snack brands from JDW Distributors in October.

“JDW has a great line of snacks that are plant-based, and they do have healthy aspects,” Haddad told me.

“[The other attraction is] having data from the U.S., and they have such a great distribution network established already with over five thousand stores, so that significantly increases Modern Meat’s outreach into all these retailers… and puts our foot in the door [so we’re] able to introduce our products through those same channels.”

Modern Meat plans further M&A deals to expand in the U.S. as it has hired one of the top Canadian investment bankers that will help source “strong brands and distribution acquisition targets,” according to Haddad.

“We are looking at this whole plant-based category,” she said, “because there might be a really amazing [vegan] cereal. So for us, to find different products and acquire them under our umbrella seems to be very interesting, and I feel like that’s the wave of future — you want to eat plant-based breakfast, lunch, and dinner.”

Haddad notes how Modern Meat is constantly developing new products, as well as improving the quality of its existing offerings, but one misconception about plant-based alternatives is they have to be as close to meat as possible.

“It doesn’t have to simulate meat 100%,” she explained, “because some people, who are plant-based, don’t want to have a complete meat product, but want the taste and texture to be almost like it’s a new product,” which resonates with a vegan Gyoza that Modern Meat recently introduced to target the Asian community.

“We want to make meat eaters to say [our plant-based pork Gyoza] tastes better than the animal version,” she said.

The launch of Modern Meat-based Gyoza shows how convenient meal solutions are an increasingly attractive sector for plant-based players, as UK-based Wicked Foods, which has successfully secured listings at local retailer Tesco with its more than 80 plant-based products, is also expected to enter the U.S. next summer.

The company, which was co-founded by brothers Chad and Derek Sarno, has joined Unovis Asset Management, and is currently being led by the investment firm’s recently appointed partner Pete Speranza, who previously co-founded General Mills
’ venture division 301 Inc.

“In my nearly 25 years in CPG, I haven’t seen anything quite like what Chad and Derek have been able to create with Wicked Foods,” Speranza says in a statement.

“Their commitment to producing the most crave-able, sought after, chef-crafted plant-based foods is driving huge demand in the UK, and we know Americans are ready for this genuine and unapologetic approach to plant-based eating. Beyond that, it’s not only vegans that are creating demand but also mainstream consumers who want in on alternative protein options that put flavor first.”