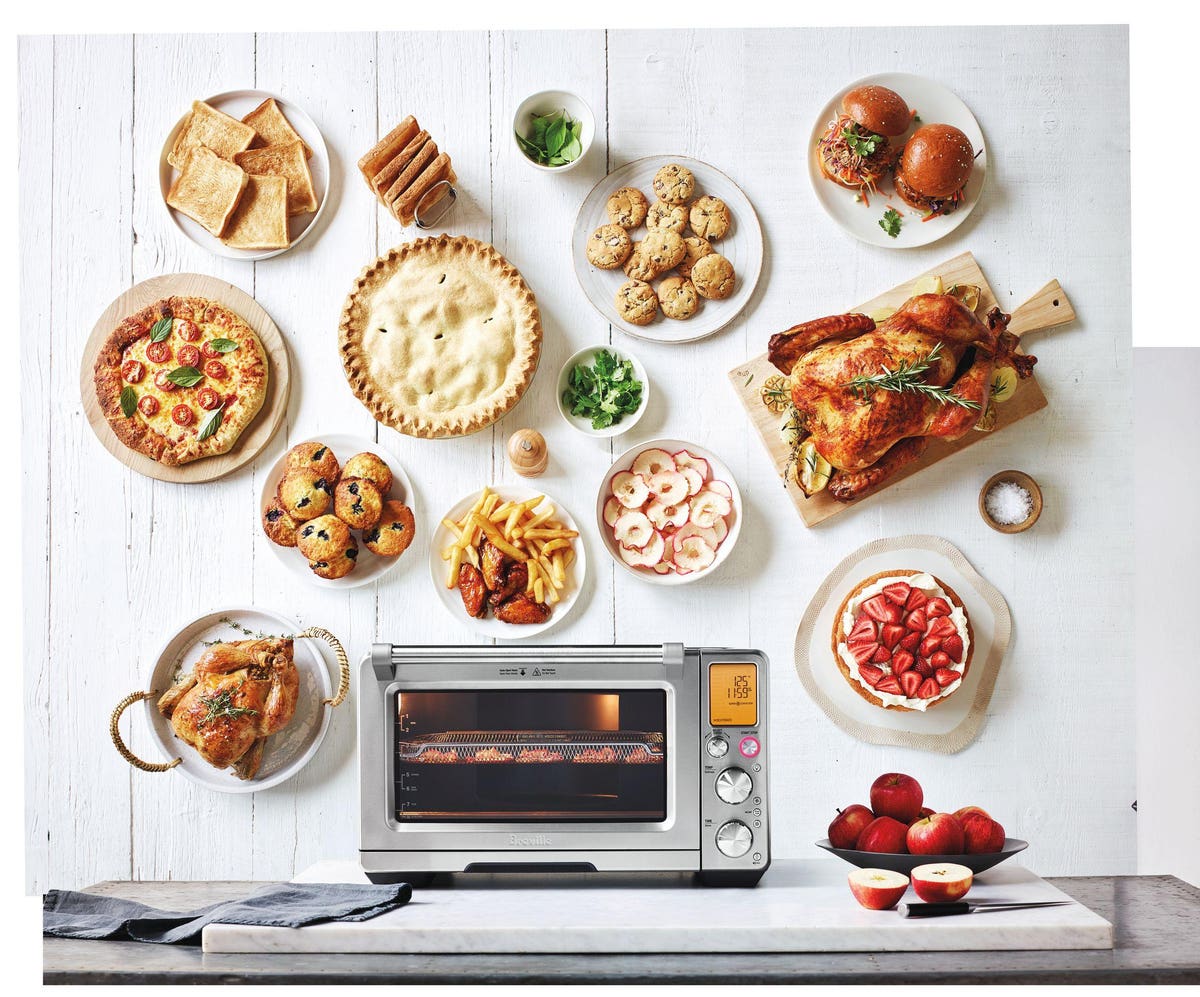 It was the text chain that would not stop. Earlier this pandemic, good friends of mine who normally chatted about weekend plans or which Netflix shows to binge suddenly rallied around a singular new obsession: the culinary superpowers of the Breville Smart Oven Air BOV900.

How does a glorified toaster become the hot topic of the year? Especially this year? Especially during a presidential election, a pandemic and a global shutdown? Let me phrase the question another way: Have you tasted the french fries?

“The Breville” (aka “the Brev,” “my Brev” or simply “my B” in the parlance of our cooking circle) is, on one level, a way to heat things up. The countertop convection and air fry oven, about the size of a big microwave and priced around $320, toasts, broils, roasts, slow cooks, air bakes, warms, and even proofs and dehydrates.

Maybe it’s all the time we’re spending in the kitchen this year but these functions somehow add up to more than just specs on an instruction list. The ability of one stainless steel appliance to perform all those tasks and more—the Brev’s got a pizza button and a bagel button, too!—adds a dash of flair, science and experimentation to the never-ending task of meal-making during Our Relentless Year of Eating at Home. Meatloaf in the wall oven again? Who cares? But try air frying tater tots in the Breville or whipping up dried pineapple slices for the kids overnight? Now we’re living an episode of Chopped!

At least I’m not alone in my adoration. My text group is a personal support network for all questions Breville-related (“Can you roast potatoes and broccoli at the same time?” Yes! “What’s the best recipe for salmon?” Roasted en papillote!) but there are huge online resources, too. Look  here and here at two groups devoted with near-religious fervor to this one Breville model! All this helps explain why the Smart Oven Air is frequently sold out, and also why Breville reported a healthy 25 percent increase in revenue this year outside Australia and New Zealand.

I like hearing the behind-the-scenes stories around popular gadgets, like the origin tale of the Instant Pot that was my bae before the B, so I connected with Sydney-based Breville, and learned way more than I expected.

Catherine Ruspino is Breville’s General Manager of Cooking, and helped oversee development of the Smart Oven Air. An American with an MBA in finance and statistics from the University of Chicago, she is meticulous about numbers, and that begins with 80 degrees F, the stable low temperature that gives the Smart Oven Air its ability to proof and dehydrate. That reliable low temperature prompted a shift in how serious bakers and chefs use the Brev in the kitchen, be it with dough, dried fruits or beef jerky.

“When you start working with heat, the hardest thing to do is keep a low temperature constant, and not to have small bumps up and down,” Ruspino says. The algorithm she and her team worked out for stable low temperatures is one of the reasons amateur and pro chefs rely on the Smart Oven Air. Wall ovens have a large interior, and since air is not the most efficient way of transferring heat, large ovens can be fairly inaccurate on the whole. “It’s easier to create a high level of accuracy in temperature in a toaster oven and that’s where the magic is for the Smart Oven Air,” she says.

Ruspino watches data on consumer use and sees that roasting and air frying are among the most popular features. “Making french fries in the air fryer is what everyone talks about,” she says. “Whether they’re homemade or store bought, the air fryer adds a level of crispness and heat that outdoes anything you can make in most conventional ovens.” The same goes for roast chickens, chicken wings or drumsticks and even the big oh, wow move for an oven of this size: Roasting a 14-pound turkey.

“This Breville model has our largest cavity,” she says. You can pop in a Le Creuset casserole dish before bed and slow cook a roast overnight. Likewise, as we did recently, you can hit dehydrate and have crisped-up apple snacks or dried mangoes in your Brev-made granola the next morning. “Again, the fine-tuned temperature control allows you to make granola without burning it,” Ruspino says.

It was the tater tots that first won me over. I’d been hearing about these from the group texts and ran out and got a bag of Trader Joe’s finest the moment my Brev arrived. In air fry mode, the tots crinkled perfectly on the outside but stayed puffy within in a way that brought back memories of the tots my wife and I ate on our honeymoon at The Ritz-Carlton in Bali (yes, the Ritz loves tater tots, too).

From there it was onto roasting cauliflower and broccolini, which used a fraction of the oil it takes in a conventional oven. Heating up takeout pizza refreshed the slices in a way that made them taste like artisan pies. I can’t quite explain the science but Ruspino says it’s all about how tightly coiled the cooking elements are. Consistency of coil temperature, combined with an interior fan to spread the heat around, means leftovers taste better the second time around.

The large LCD screen on the control panel makes the cooking experience a dream. My wife is a professional pastry chef and chocolatier. I am not. So, it’s nice having words like “Warm” and “Cookies” on your dial menu. As I’m writing this, I’m waiting for last night’s salmon to reheat, and all it took was me hitting the button called, yep, “Reheat.” Why can’t more gadgets be this clear? (Interestingly, top restaurants like Per Se and Gramercy Tavern in New York use the Breville almost exclusvely for heating up bread, I’m told).

If you’re here as a diehard, you know about certain functions already. The pandemic bread-making boom finds its expression in the Breville, with its ability to proof and bake. The broil function lets you heat the unit to 480 degrees F, which gives you grilling options for shrimp, fish and meat. You can also do homemade pizza at that temp.

One trick that people may not know is that the racks have curvature and were made to flip up or down to give people micro-detailing options when broiling. “It gives you an extra inch of flexibility to get closer to the top heating element for that final sear if you need it,” Raspino says.

I’m less of a precisionist and more of a “most popular features” guy, so I asked what people use this mighty toaster oven for the most. With all those features and nuances, (and all those texts bouncing back and forth), the answer floored me, but I guess I shouldn’t have been surprised.

“Americans still buy toaster ovens to make toast,” Raspino says. “So, we spent a lot of time making sure the toasting results were acceptable.” It turns out the whole unit is built for toast. It’s laid out in a way that allows you to toast up to nine pieces of bread at once, and have it all be perfect. I know because I’ve tried it. I’m now a nine-pieces-of-bread toast-for-the-whole-family bread aficionado, and I couldn’t be more pleased with myself. It’s 2020, after all, and you have to appreciate life’s little joys where you can find them.

There you have it! A toast to my B and me. I think I’ll tell all my friends.