For 50 years, the grande dame of health spas has welcomed stressed-out actors, the rich and famous, and locals, through its heavy Gothic doors to rest, relax and recharge. So the sudden announcement on Nov 20 of its permanent closure must be a kick in the guts for its loyal guests – something of an irony for the first British medical spa to offer the award-winning Mayr Detox Gut Health Regime.

Michael Parkinson was a regular guest and a young Roger Moore is said to have had to apologise to the owners after holding a rowdy drinks party around the pool. I didn’t experience any such hijinks during my last visit, just peace, tranquillity and guests padding around the characterful country house in comfy robes and slippers.

Once the home of Lord Alfred Tennyson, the stately manor house with its squishy sofas, regal armchairs, attractive ceiling mouldings and carved fireplaces, engineered a friendly house-party atmosphere, which I felt set Grayshott apart from other soulless, modern spas.

Guests chatted to one another in the lounges. Many I spoke to were on an annual wellbeing pilgrimage; a few came more frequently.

Grayshott has always attracted a loyal following. Its elegance – which perhaps faded a little in recent years – exuded a charm enjoyed by a mainly older clientele. Younger guests were more likely to be with a parent than friends. Critics have called it old fashioned. Personally, I loved the grandeur.

The minimum two-night stay, with rooms costing upwards of £515 per person, was probably also a bar to younger guests and there were no day visitors to boost footfall. On the plus side, no day visitors meant no jostling for loungers around the fabulous pool (which in the morning I usually had to myself) or fighting for a seat in the whirlpool.

Ironically, I first visited Grayshott Hall, as it was called then, as a day guest in 1991 when health farms were reinventing themselves as pampering spas. The Hall exuded an exclusive, intimate air, with guests often on strict health and eating regimes. The day, at £75 a pop, included a wonderful facial, and reflexology, which cost extra. Sadly, the detox and absence of caffeine gave me a headache for much of the day.

If there was one thing I loved most about Grayshott it was the food, which was exceptional. Nutritious meals such as a memorable Thai prawn and red mullet curry with lemongrass and ginger were outstanding, and soups and salads literally burst with flavour and goodness. The charming wood-panelled dining room provided an intimate setting, though service could be a bit hit and miss.

I couldn’t fault the facilities, treatments – think fabulous reviving glow facials – or the variety of daily walks, exercise classes, films and talks on offer either. The grounds surrounded by 700 acres of National Trust land were beautiful.

The words inscribed above the grand Gothic entrance are a fitting legacy: Pax intreantibus, sales exeuntibus – “Peace to those who enter, good health to those who depart”. Sadly, it’s now time to turn off the lights.

There are still some wonderfully enchanting country house spa hotels out there to smoothe, stretch and pummel you into post-lockdown bliss. Please check relevant guidance before booking or travelling. A sprawling Palladian-style hall (with 17th-century origins) set in woodland between Ripon and Pately Bridge. The hotel fires on five-star cylinders: 30 acres of surrounding parkland and formal gardens, restaurants including that of Michelin-starred chef Shaun Rankin, and a two-level spa. Facilities include a thermal experience and snow room, a marble-clad pool, indoor-outdoor hydrotherapy pools, an outdoor terrace and hot tub area, treatments by Ila and Natura Bisse, two gyms plus altitude training facilities, and slumber-inducing relaxation areas including an outdoor terrace. 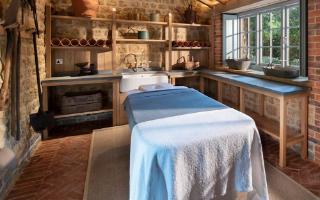 The Newt in Somerset

The Newt is one of the most exceptional country house hotels in Britain. It occupies a beautiful Palladian-fronted red-gold limestone house, first built in 1687, and stands surrounded by famous gardens that have been entirely replanted and redesigned by Patrice Taravella. And then there’s the cyder press, bottling plant and bar, mushroom house, History of Gardening Museum, farm shop, treetop walk, ice cream parlour and wild swimming ponds. Best of all, the hotel has a spa with sauna, salt steam room and beautiful pool leading to a heated outdoor hydrotherapy pool, as well a glass-walled gym. 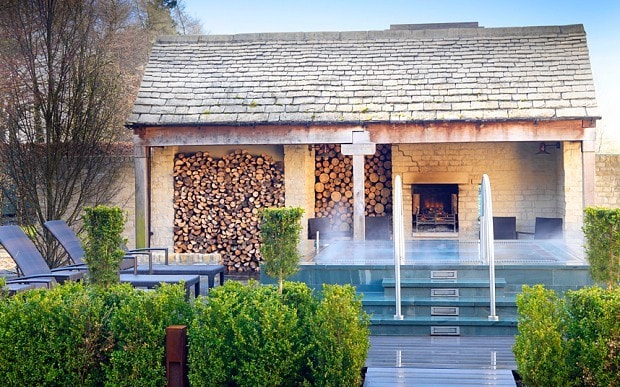 Calcot & Spa sits in its own 220 acres of rolling countryside, just four miles from the charming Cotswolds village of Tetbury. The sprawling and spacious spa complements this extensive retreat with its relaxing treatment rooms, heated outdoor hot tub and indoor slate-lined pool (with separate swimming times for children) as well as large outdoor pool. The staff evidently love the hotel, and their enthusiasm is charming. Top marks go to the spa team for creating a calming mood while managing the (normally busy) flow of guests. Treatments include massages, facials, grooming, manis and pedis. 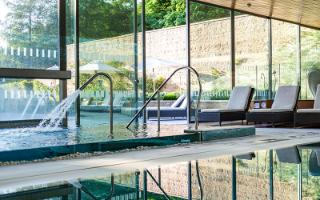 You can easily spend a whole day luxuriating in this Georgian mansion’s state-of-the-art spa, cut from polished cream stone. Its heated outdoor therapy pool, sidled by a panel of flickering fire, overlooks trees, plus there are saunas, steam rooms, a Himalayan salt room and a Japanese salt room. There are 12 treatment rooms, with therapies that use ESPA products. The wellbeing house offers yoga, Pilates, dry flotation and aromatic thermal massages. Elsewhere there’s a Michelin-starred restaurant and 42 bedrooms decorated in a traditional country house style. 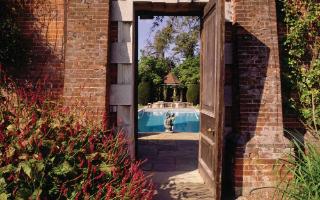 This National Trust property, situated among 376 acres of verdant greenery on the banks of the Thames, is one of the top luxury spa hotels near London. The outdoor pool, where the Profumo affair started, is surrounded by loungers and two hot tubs. Inside, there’s an indoor pool, whirpool tub, and orangery-style relaxation room, plus seven treatment rooms. Cliveden offers sumptuous Oskia treatments as well as Sarah Chapman Skinesis facials, which involve the global beauty expert’s signature ‘gymnastics’ for the face movements and award-winning products.

More hotels in Hampshire
View all

American Airlines to stop flying to four small cities, citing pilot shortage
How to spend a weekend in Vienna
20 of the best outdoor swimming pools and lidos in the UK
Boeing delivers 35 planes in May as it grapples with supply chain problems
Travelers are upset about rising costs, but most aren’t canceling their plans just yet