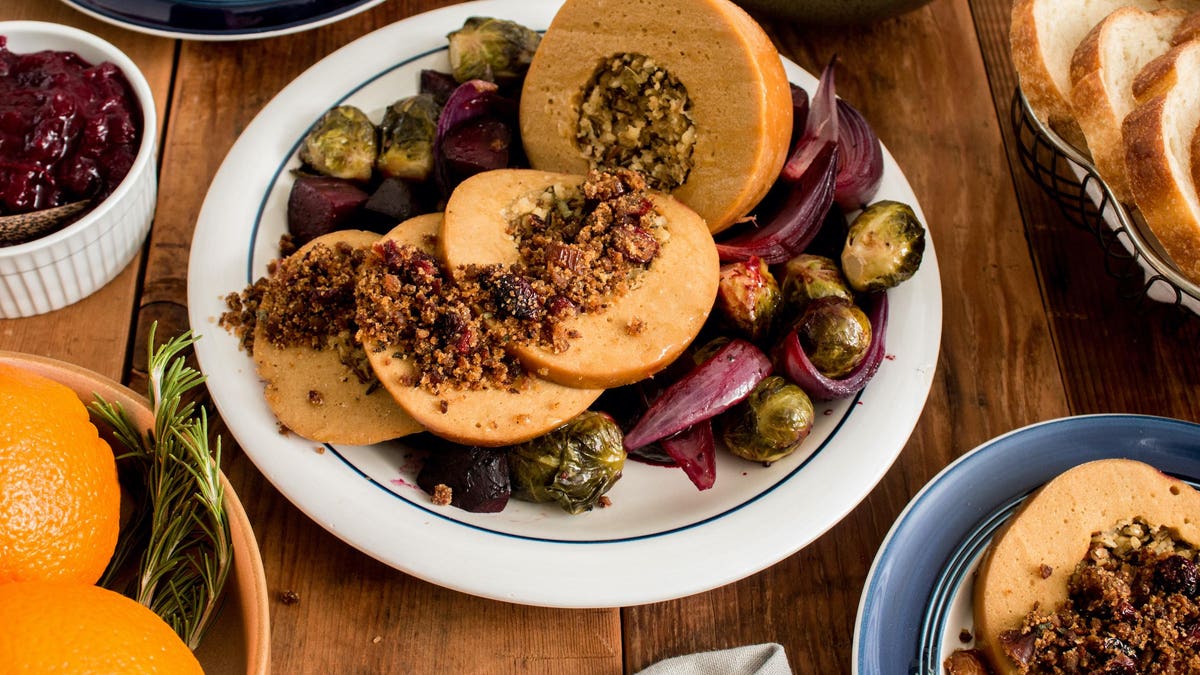 Tofurky has been joked about on The Simpsons and The X-Files. It has a featured spot as a Jeopardy answer. Even Ruffles Chips has poked fun at it.

Since it was introduced in 1995, the turkey alternative — a blend of tofu and wheat with a wild rice and breadcrumb stuffing — has been the brunt of meat-lover mockery across the country, especially during the Thanksgiving holiday, when any meal without turkey is, at best, lackluster.

The vegans are fighting back. And so is 69-year-old Seth Tibbott, the self-described wandering naturalist who was an educator and environmental surveyor before starting Tofurky in 1980.

“It is a challenge,” Tibbott said during a live interview on the Forbes Instagram account Monday. “As a 40-year-old company, we’re not the sexy young thing on the block anymore.”

If they ever were. In addition to decades of lampooning, Tofurky-branded products are pretty much everywhere — in 27,000 grocery stores across the country — but also nowhere. Its products are stocked in the produce section of supermarkets, with most of the other vegan products, compared with the mainstream approach taken by Beyond and Impossible, whose products are not alone sitting along beef and pork in meat chillers, but also available on the menus of big chains including Burger King, Dunkin’ and Pizza Hut.

Put simply, the grande dame of alternative meats was too early and missed the moment. Sales of plant-based proteins are surging, led by newcomer burger providers Beyond Meat and Impossible, which have led a trend toward meatless meals that has lifted the market for fresh alternative proteins by 75% this year, according to Nielsen. The boom has given Tofurky a boost, too, lifting sales by 32% this year; Its Thanksgiving bump is the best since 2017.

Seizing the advantage won’t be easy. The closely held business doesn’t release financials but has likely revenue of about $50 million. That’s much smaller than Beyond, which trades publicly and has a valuation of more than $8 billion and revenue of $300 million so far this year. Tibbott says Tofurky is profitable, while 11-year-old Beyond has yet to turn a profit. Catching them will require a giant leap from the slow-growth strategy of the past.

“There was no hungry VC knocking down our door saying hey, how about $1 billion for that idea,” says Tibbott of his four decades of bootstrapping. “It’s really changed now. But that’s a unique thing about Tofurky: After 40 years, I’m still the biggest shareholder and it’s family-owned.”

Tofurky has just one plant in Oregon with some 200-plus workers who churn out its signature faux-turkey roast as well as deli slices and sausage. The plant runs entirely on solar energy.

Tibbott continues to fund growth through small loans, including a $7 million loan from private investors last year that it is using to accelerate new product development, including new lines of plant-based burgers and shredded cheeses, which are increasingly more important to the business: Thanksgiving roasts were as high as 15% of sales, Tibbott wrote in the 2020 book In Search of the Wild Tofurky. They now total 8%. At Easter time, when stay-at-home orders were in full-effect, sales for a ham alternative jumped 600%.

“With the category growing at an alarming rate, we’re even having to really look at our model and say, is this the model that’s going to be the best and keep us up?” says Tibbott, who described the now $1 billion market for alternative meats a “jetstream.”

His focus is now on moving Tofurky out of the vegan corner of the produce section and into more heavily trafficked grocery departments which, according to Kroger, helped drive additional sales of alternative meats by 23%. He is not yet chasing another strategy that has helped fuel the rise of Beyond and Impossible: supplying restaurants and fast-food chains with alternatives.

If he does find the right model that helps Tofurky close the gap with the competition, the former hippie who caught the bug for meat alternatives on a Tennessee commune in the 1970s, could turn his ideals into a massive fortune. Tibbott and his stepson-turned-CEO Jamie Athos regularly fend off cold-calls from financiers promising equity investments and splashy IPOs. If they did bite, they could deliver the ultimate punchline to Tofurky haters: Beyond Meat is trading at 21 times sales, which would give Tofurky an implied value of more than $1 billion. A more reasonable multiple, considering its less ambitious approach to distribution, implies a value of about $250 million.

“Over the next 15 years we’re going to be seeing a massive shift towards plant-based foods, so instead of braking trail uphill, now the snow is melting and the highway is opening up under our feet,” says Tibbott. “It’s really cool to be a leader and driving on this new road that is in a lot of ways a lot easier to follow. The market that is easier to talk to.”