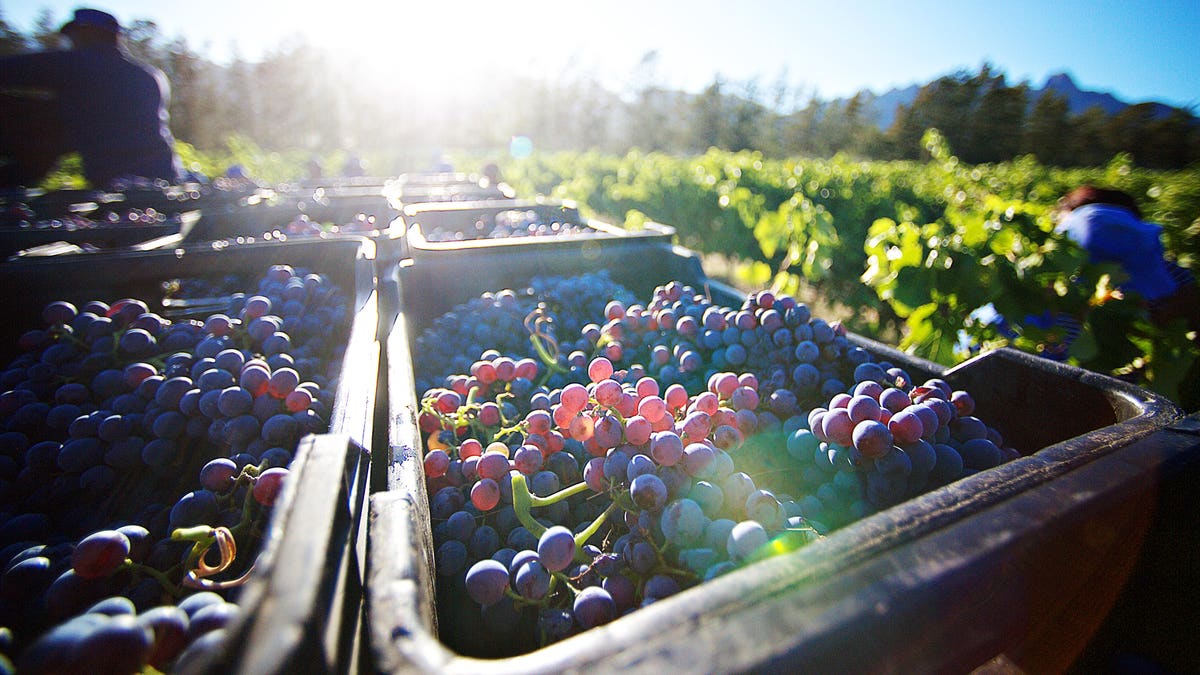 Some winemakers are always looking forward to push the envelope of what they can achieve in their vineyards and winery while others look back in nostalgia at the wines of the past. Joe Nielsen has spent over a decade as a winemaker in California and although he is a man that is deeply rooted in a modern mindset of using science and data to help guide him, he is also a strong believer in allowing a plot of vines to be what it is supposed to be instead of turning it in something else that fits a dogmatic style. That is why he is an avid collector of California wines from the ‘70s, ‘80s and early ‘90s as, according to his opinion, vineyard expression that allowed for all sorts of variability was more interesting and a key focus back in that era of winemaking as opposed to pushing ripeness. Although Joe was already spending a significant amount of time making a living as a winemaker in Sonoma County as well as going to business school during his down time, his creativity was not being completely fulfilled and hence he went out to find a special plot of vineyards that he could make under his own label.

At the time, Joe worked for Donelan Family Wines located in Santa Rosa and since the winery had a focus on Pinot Noir, Chardonnay and Rhône varieties, he decided to seek out a unique Cabernet Sauvignon vineyard that reminded him of those wines from the ‘70s to early ‘90s and eventually he found it. An unknown vineyard named Berler sat at 1,600 feet above sea level in the northern section of Sonoma Valley on Spring Mountain facing north. “It is a cold spot within a hot area,” noted Joe as although the general climate of that section of Sonoma Valley was on the hotter side, the vineyard itself had a cooler microclimate due to the elevation and its aspect avoiding direct, intense sunlight – slowly ripening the fruit. Joe was able to come up with a payment plan with the farmer to buy the fruit with his first wine made in 2016 and he was blown away by the end result; wild aromatics of olive tapenade and that distinctive smell of chaparral that one smells when hiking through California (scrubs and brush). But as the wine sat in barrel and Joe tried to figure out a name for his brand, a label or business strategy, life took another turn as within a couple of years he had two children and started a new job as director of winemaking at Ram’s Gate in Sonoma and his priorities changed. “I no longer had that desire to prove a point or start my own business and it lost its appeal,” said Joe.

But that desire to find vineyard expressions that allowed for all sorts of variability only became stronger within Joe as he started his new position at Ram’s Gate and he started off trying to figure out what the vineyards wanted to be instead of fitting them into a particular style.

Joe Nielsen started as director of winemaking at Ram’s Gate in 2018 after spending a decade at Donelan and it was an opportunity for him to work with Carneros fruit as the estate lies where the San Francisco Bay meets the edges of Napa and Sonoma with Sonoma Valley to the south, Sonoma Coast on the east and on the west was Carneros. Joe saw this as a good opportunity from a “creative standpoint” to work with different vineyards as California’s topographical diversity creates adjacent plots of land that are completely different in regards to growing grapes, so within the same wine region the terroir can be drastically different. But there were challenges as what he thought he knew before was being put into question – Ram’s Gate had a different way of going about some practices in the vineyards. Joe wanted to be “thoughtful” when it came to the practices he brought to Ram’s Gate and he didn’t just want to do something because it worked well at Donelan. And so within his short amount of time he wanted to get to know the vineyards Ram’s Gate owned in a very real way by digging soil pits.

Joe brought in an excavator to dig various pits throughout their vineyards and had a viticulturalist with a PhD walk him through examining the roots and conditions of the subsoil; Joe and his team learned more in “four hours” than they would have learned in a couple of years of farming. For the most part, what Joe had observed about the vineyards proved out to be true with all the tests they ran on soil samples as well as what lurked below the surface that they could simply see with their eyes. Some of the blocks were in good shape, some bad and others just needed a divergence in terms of farming practices. The knowledge and data that Joe has collected is part of keeping himself “honest” in terms of what the vines and soils need as he has felt that some California vineyards have lost a lot of character because of the addition of too much fertilizer or too much irrigation. In Joe’s mind, a poor, shallow site for vines should be able to express those conditions in an interesting way instead of being pumped up with water and nutrients allowing too much fruit and too little nuance.

But what Joe puts or doesn’t put into the soil is only one aspect as picking the best harvest date for any given vineyard is a big contributor to its expression.

One of the single vineyards from which Ram’s Gate buys fruit is the legendary Hyde vineyard (Carneros on the Napa side) for Chardonnay which is very exciting to Joe as he not only knows the great status of the site but also has worked with someone who knows the vineyard well. Joe’s predecessor at his Donelan winery worked at Hyde de Villaine, a partnership between the Hyde family of Napa and the de Villaine family of Burgundy (involved with the iconic Domaine de la Romanée-Conti), and so Joe had already been given a valuable lesson about the Hyde vineyard and the importance of not sacrificing the mineral quality for riper fruit. Ram’s Gate had been picking the Hyde vineyard a lot later than Joe would have preferred so for his inaugural 2018 vintage he tried to pick where he could get that balance of place and ripeness, and although it was a warm year where some of the fruit got a little riper than he would have liked, it turned out to be a wine he loves. “Exploiting aromatics”, high acidity and that mineral note with still “great richness” came together and although he did pick a lot earlier in regards to ripeness than Ram’s Gate would have done, he is very wary of going any further with ripeness in the future as he feels he might lose all those fantastic aromatics.

He has also picked earlier where they buy fruit in the El Diablo vineyard in Russian River Valley for Pinot Noir as he felt that the ripeness and plush quality was already there and that hot weather was on its way during the Labor Day weekend in 2018 and the grapes could lose their elegance and vitality if he waited any longer; so with a “hope and a pray” the grapes were picked with a beautiful balance that included lots of fruit with structure and complexity.

But Joe doesn’t pick early just to pick early or to get lower alcohol for the sake of lower alcohol as he feels that it is as much of a trap as picking for higher alcohol just for high alcohol. And so he is constantly monitoring the vines, starting very early in the season as far back as budding in the spring until right before harvest and he uses all the data he collects to guide him to find harmony as he does not want to force any type of agenda that takes away from the task of getting the grapes to the point of expressing that plot for that vintage. Joe says that sometimes farmers who are trying to push the envelope will see what they want to see instead of the truth and that “the data helps” to keep him “level-headed during harvest.” And when it comes to making classic California wines, it is not about lower alcohol per se but about being open to the feedback of the vines.

Dreams have the Tendency to Materialize in other Ways

Sometimes one’s dreams materialize in ways that cannot be imagined as the dream typically has particular details that must be fulfilled. Joe Nielsen had a vision of his own brand that focused on expressing the raw aspects of the sites that he thought would bring back more diversity within the California wine landscape. That exact dream was not possible or even desired at this time but this new opportunity of becoming the director of winemaking at Ram’s Gate gives him a chance to reexamine and access how they have been farming their vineyards as well as becoming a chance for Joe to question his own knowledge and to grow creatively as a winemaker and grower; with a side benefit of him being able to easily take the Ram’s Gate estate vineyards to become fully organic as they were practically almost there anyway and he always wanted to work with an organic winery and vineyards.

Joe continued making his beloved 100% Cabernet Sauvignon from Berler vineyard and after he started working for Ram’s Gate he bottled the 2017 vintage; now Ram’s Gate carries the wine under their label. It is only a small amount of wine that is around five and a half barrels for the 2017 vintage but he said that it “feels good” to have a home for Berler vineyard and after all that had happened that he did indeed get to release it.

Some dreams don’t die… sometimes they reemerge in a way that is unfathomable to one before and as long as that person can let go of what the dream needs to look like and instead recognizes what was at the heart of it then there may be a chance to live that dream; just like wine, it is not about a style that is being forced but staying true to allowing the land and grapes to be what they want to be… during the good and tough times.

2018 Ram’s Gate, ‘El Diablo Vineyard’ Pinot Noir, Russian River Valley: 100% Pinot Noir. Again, the same warm area and Joe said this was the earliest he had ever picked Pinot Noir but there was a heat wave coming and with the help of all the data he was getting by spending lots of time in the vineyards, he knew they had the fruit intensity they needed and so his focus shifted at that point to saving the complexity of texture and aromatics still left in the grapes. Black cherries with hints of lilacs and fresh sage with juicy fruit on the body with fine texture of tannin giving shape and lift.

2017 Ram’s Gate, ‘Berler Vineyard’ Cabernet Sauvignon, Sonoma County: 100% Cabernet Sauvignon. The dry brush and scrubs were evident with notes of evergreen plants and the woods after it has just rained; hints of lavender and fresh pine cones added to the mixture of blackberry and red currant fruit that had well-integrated tannins along the long, expressive finish.

Athens: What NOT to do in Athens, Greece
Azure Sky is Palm Springs Newest and Coolest Oasis
You’ll be charged to visit Europe from 2023
How to Stay Cool in San Diego’s Pools
What sitting in economy on Qantas’ 20-hour flights will be like