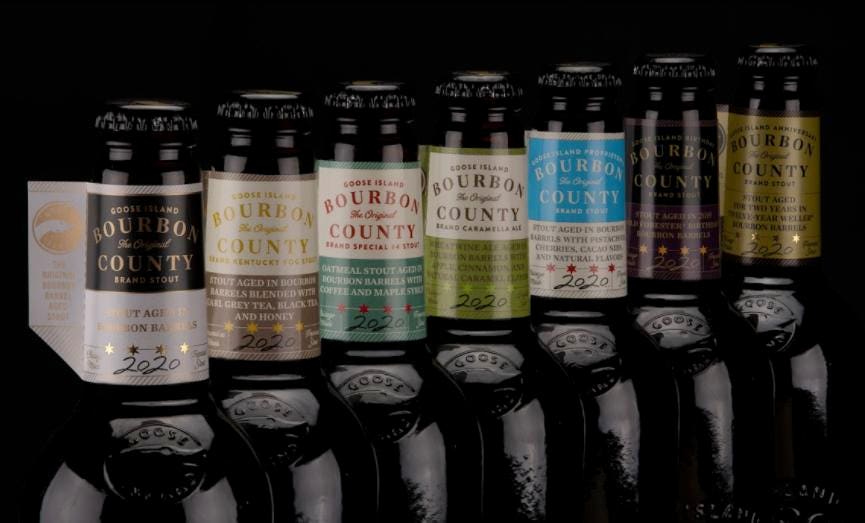 Each Black Friday, Chicago’s Goose Island Brewing releases Bourbon County Stout. The beer marks one of the largest events for the brewery each year, and in during non-pandemic time includes a big release-day celebration at Goose Island complete with beer nerds camping out for the night with the hope of snagging a few of the coveted bottles.

The brewery puts out a standard Bourbon County Stout each year, but then also releases new variants of the beers each year thanks to suggestions from its staff. This year’s lineup includes a few unique ones that take advantage of some bourbon barrels that make the variants just as desirable to bourbon drinkers as it does beer enthusiasts.

I had the opportunity to taste through this year’s lineup with Goose Island Brewmaster Keith Gabbett during a press tasting in late October. Here’s a rundown of what’s available this year, and which options I think you should try to get your hands on.

The standard Bourbon County Stout is going to be perhaps the easiest of this year’s lineup to find. If you’re a fan of Bourbon County, then you also have a pretty good idea of what to expect from this one out of the gate.

Bourbon County Stout is aged in a mix of bourbon barrels from whiskey distilleries such as Buffalo Trace, Heaven Hill Distillery and Wild Turkey. Tasting notes for this years release include: Cocoa, fudge, vanilla, caramel, almond, plus leather and tobacco

“This is classic Bourbon County. It’s got everything that I look for in Bourbon County. You have notes of chocolate. You have notes of toffee and get a little bit of coffee on the back end there. There’s bourbon of course, oak, leather, you get some dried fruit in there, a little bit of vanilla maybe a touch of toasted marshmallow,” describes Gabbett.

If you’ve never had Bourbon County Stout before, then kick things off with this one. If you like stouts and bourbon then I can pretty much guarantee you’re going to like it.

Bourbon fans are probably familiar with Old Forester’s Birthday Bourbon. The limited-edition bourbon, released each year on the founder George Garvin Brown of Brown-Forman’s birthday, is made in hand-selected 11-year old barrels and chosen from one specific day of production – resulting in flavor profiles that vary every year and never replicated.

This year, Goose Island scored a few barrels used to age the sought-after bourbon and used it to age some Bourbon County stout.

“To me, this beer, just screams fruit, like red fruit I get strawberries I get a little bit of blueberry in the background. You get all those other wonderful things that get an original, you know, the top is still there the vanilla is still there. You know those higher alcohol notes with the bourbon are still there of course you still get some oak, but some of that chocolates faded down a little bit, and those fruit notes are what really shine for me in this particular variant,” says Gabbett.

This is one of my personal favorites from this year’s batch and is one I’d even recommend buying two of, one to drink now, and one to drink a year or two from now, perhaps with a glass of Birthday Bourbon by your side.

When you think of stouts you probably aren’t thinking of Early Grey tea, but somehow Goose Island has managed to combine the two into something pretty phenomenal this year.

Kentucky Fog is the brewery’s first ever tea variant. Brewer Paul Cade brought this idea to life, inspired by his girlfriend, Martha, who prefers tea over coffee. Bourbon County Kentucky Fog Stout is a take on the London Fog tea drink. With that flavor profile in mind, Goose Island added Earl Grey Tea and Black Tea from Kilogram Tea, as well as clover honey from The Honey House, to make a Bourbon County Stout variant with a complexity like none before.

“I have been working to blend the flavors of tea and BCS for years. With characteristics like liquorish, molasses and Tobacco, tea’s inherent complexity was one of the biggest challenges,” says Paul Cade, Kentucky Fog Stout Brewer. “Earl Gray, a blend of black tea and bergamot oils, presented an interesting opportunity, a way to bring the rich deep flavors of tea and balance that with the brighter bergamot characteristics like citrus, floral and herbal. Sharing my trials with Martha and the rest of the tea lovers at goose island has been my favorite part of the production of the variant. I owe each of them for helping me get to the final product and I look forward to sharing it with the rest of the world soon.”

Tasting notes for this one are Black licorice, white pepper, citrus, florals, and graham cracker. It’s absolutely a different kind of stout, but a delicious one worth trying.

Lastly bourbon barrel-aged maple syrup from Bissell Maple Farm in Ohio is added which provides complexity to the nutty oats and coffee to round out the flavors, ultimately reminiscent of your breakfast ‘special’ at the local diner.

Tasting notes for this one include coffee, vanilla, toasted nuts, cocoa, and maple.

Caramella or ‘candy’ in Italian is a wheatwine aged in Larceny Wheated Bourbon barrels with apple, cinnamon, and natural caramel flavor added after aging. Just like last year, the sweet smoothness from the Larceny Wheated Bourbon barrels adds a lingering warmth that complements the added flavor nuance. Its nostalgia-inducing flavors are reminiscent of a caramel apple. Goose Island’s Lab Tech, Joey Tidei, created this variant as a tribute to his love of seasonal flavors. This luscious embodiment of caramel perfectly paired with a slightly-tart apple flavor will transport you to a crisp autumn day.

“Caramella is a recipe I have been dialing into the past three years at Goose Island. Inspired by my Aunt Jean’s insanely delicious Apple Crisp dessert, I decided to make it my own with BCS by adding a lick of caramel to support the sweet and toffee-like Wheatwine base,” says Joey Tidei, Goose Island Lab Tech and Caramella Ale creator. “The aroma leans heavily into sweet caramel and cinnamon spice, while the taste comes in to show off the bourbon-soaked Larceny casks and red apple notes, reminiscent of a bold apple brandy. I’m truly honored to be able to continue the legacy that is Bourbon County Stout and release Caramella in this year’s BCS lineup. From my family to yours, cheers.”

Goose Island’s original Bourbon County Stout is aged in 4-5 year old barrels for one year, so the added age of these Weller barrels, paired with an extra year of the beer in the barrel, adds stronger barrel flavors and notes of dried dark fruit.

While the dark fruit and added barrel notes are nice on this one, it didn’t stand out as strongly from the original BCS as some of the other variants to me. Don’t get me wrong: it’s still pretty freaking delicious, just not as distinctive on its own as some of your other options.