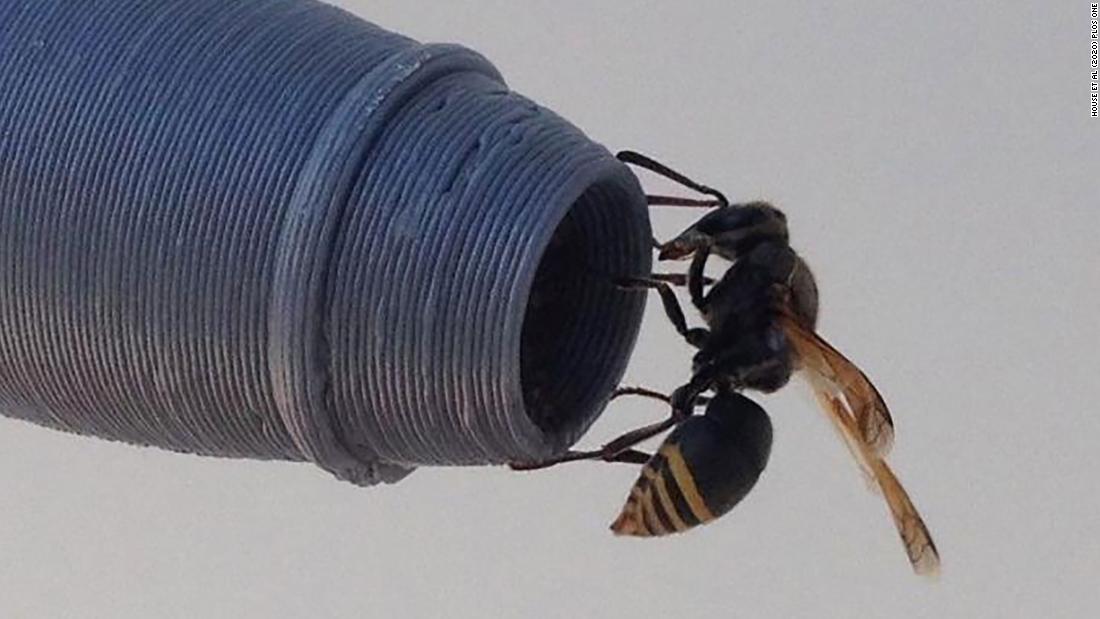 Native to Central and South America and the Caribbean, the keyhole wasp first caused problems at the airport in 2013, when it forced an Etihad Airways A330 bound for Singapore to turn back minutes into the flight.

Once on the ground, maintenance workers found the pilot’s pitot tube — the hollow instrument on the outside of the plane that measures airspeed — was almost completely blocked by mud, according to a report from the Australian Transport Safety Bureau.

For wasps, pitot tubes are the perfect cavity in which to construct a high-speed nest — the Etihad plane was only on the tarmac for two hours before the aborted flight.

“We have anecdotal reports from ground crew at Brisbane that a plane can have arrived at the gate and within a matter of two or three minutes, a wasp will be flying around the nose of the plane having a look at the probe,” said Alan House, an ecologist from Eco Logical Australia.

House worked with experts from Brisbane Airport, Australian airline Qantas and the environmental consultancy Ecosure to produce one of the world’s first studies on the impact of wasps on pitot tubes. Commissioned by Brisbane Airport Corporation, it was published this week in the open-access journal PLOS ONE.

Researchers say that without proper management there’s a risk the wasps could travel to other Australian airports — and even nearby countries with the right semi-tropical conditions for them to thrive.

“When we did some background research we realized that this wasn’t just an inconvenience, that you just had to clean these things out and swat the wasps away; this could actually lead to major accidents,” House said.

Mounted at the front of airplanes, pitot tubes perform the important task of sending information back to the cockpit about how fast air is moving through them. That indicates how fast the plane is traveling — too slowly and there’s a risk of stalling, too fast and it could malfunction in other ways.

When the pitot tubes don’t work, the A330 automatically switches to manual mode, forcing the pilots to take over the controls. That’s what happened with the Etihad flight, and ultimately why the pilots turned back.

According to researchers, plane pitot tubes, which measure airspeed, are ideal places for wasps to build nests.

For instance, Birgenair flight 301 crashed off the coast of the Dominican Republic in February 1996, killing 189 passengers and crew. The accident report said that the “probable cause” of the pitot tube blockage was “mud and/or debris from a small insect” that entered while the aircraft was on the ground.

CASA advised airlines to cover pitot tubes while waiting at Brisbane Airport. However, it’s not mandatory, which is why blockages are still occurring. In total, 26 incidents were reported between November 2013 and April 2019, according to the Brisbane Airport study.

The first keyhole wasps were detected at the Port of Brisbane in 2010, though it’s possible they arrived as early as 2006, according to the study. It’s not known how they got to Australia — probably by ship, said House.

It’s thought they’ve been at Brisbane Airport since 2012, and they don’t seem to have spread to any other Australian city, though they have been seen at Emerald Airport, a small, regional hub more than 800 kilometers (500 miles) away, according to CASA.

For the study, researchers used 3D printers to print replica probes of pitot tubes on Boeing 737s and 747s, Airbus A330s, and smaller Dash 8 airlines commonly used by regional airlines. They were positioned at four locations around the airport and monitored for 39 months.

In that time, there were 93 instances of fully blocked probes, and almost all of them were built in the warmer months between November and May.

Most of the nests were close to the grassed area of the airport, according to the study’s co-author, Jackson Ring, wildlife management and planning coordinator at Brisbane Airport. The wasps collect caterpillars from the grass and shove them into the pitot tubes as food for their offspring.

Wildlife managers are using targeted, organic pesticides to kill the caterpillars, and have so far succeeded in cutting wasp activity near the international and domestic terminals by 50%, Ring said.

“We treat about 120 hectares (1.2 square kilometers) of the airfield, which is a selective way of removing this food source and making areas where aircraft are parked and vulnerable to wasp infestation undesirable for the keyhole wasp,” Ring said.

Introducing predators, like birds for example, isn’t an option for obvious reasons. Before the wasps arrived, Ring spent most of his time trying to scare away wildlife to avoid bird strikes and other dangerous encounters between animals and planes.

Can they be eradicated?

The wasp isn’t classed as an agricultural pest and it’s not a vector for human disease, so despite its status as an unwanted visitor there’s no official government plan to eradicate it, House said.

It’s also a very resourceful creature and there’s no shortage of breeding sites.

“They’re very single-minded. These guys just need to find a nest spot. Put a caterpillar in, lay an egg, seal it up.”

An aerial view of Brisbane Airport.

Like most airports around the world, traffic dropped substantially at Brisbane Airport during the coronavirus pandemic. Since July, international flights to Australia have been limited by caps on returning travelers, and state borders have been closed to contain local outbreaks. Planes were parked for months, with their pitot tubes covered to prevent infestation.

However, on Tuesday traffic will rise again as domestic border restrictions lift — meaning there’ll be more planes coming and going — creating more opportunities for the wasps to cause trouble.

According to the study, keyhole wasps are also found in the southern United States and a number of Pacific Islands including Hawaii, Polynesia, Micronesia and Japan.

The researchers are working with airport operators in Papua New Guinea and Fiji, where incidents have also been reported. They’ve also sent 3D-printed tubes and components to Honolulu for similar studies.

House said researchers didn’t want to give the impression that it’s not safe to fly out of Brisbane. If anything, he said, it’s safer than it was a few years ago, when they knew less about the insect.

The keyhole wasp might be small, he said, but their threat to aviation can’t be ignored.

“There’s a lot of attention paid right across the world to other wildlife management issues at airports, birds especially because they’re obviously seen as a major hazard for flying,” House said.

“Something like a wasp is seen as more of a low-level risk. The chances of something happening are pretty small, but there’s still a chance that it might happen.”