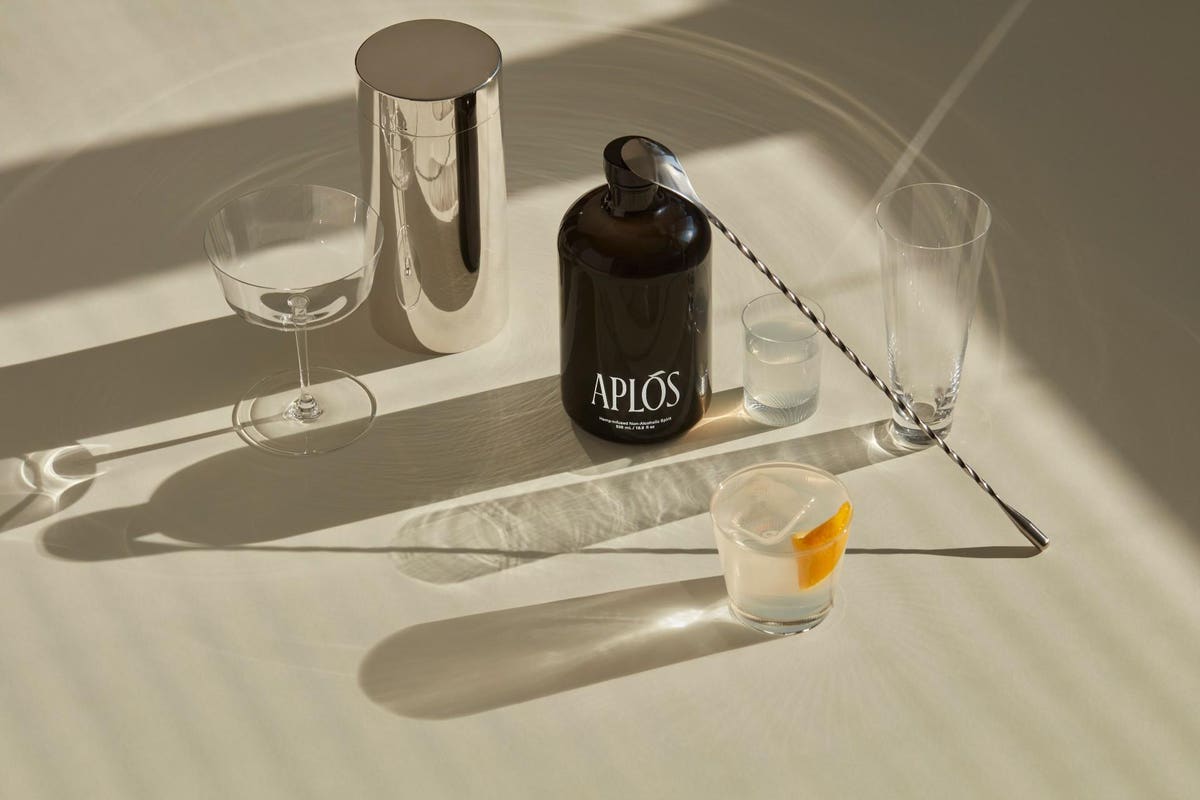 With a growing number of consumers moderating their alcohol consumption in a bid to lead healthier lifestyles, several alcohol-free drinks designed to replace boozy occasions have emerged onto the U.S. beverage scene in recent months.

I’ve written about a number of these brands and sampled dozens of offerings in 2020, including CBD-infused sparkling waters, ready-to-drink alcohol-free cocktails, canned mocktails, and non-alcoholic craft beers.

Most of these products are targeting so-called “sober-curious” consumers – those who enjoy drinking but are now substituting at least some of their adult beverages with softer versions, especially on weeknights.

Recently, a new alcohol-free spirits brand called Aplós hit my radar. Unlike other zero-proof offerings such as Seedlip or Ritual, each two-ounce serving of Aplós is infused with 20 milligrams of broad-spectrum hemp that is organically grown in New York’s Hudson Valley.

Aplós does not contain any THC, however it does feature cannabidiol (CBD), the non-psychoactive part of the cannabis plant, which has been said to help regulate mood, calm the mind, improve focus, reduce inflammation and aid sleep.

According to founders David Fudge and Jessica Manley, Aplós – Greek for “simple” — is a “first-of-its-kind” product in the U.S. beverage industry.

Launched Wednesday, Aplós is billed as a “new way to unwind” and designed to “replicate a spirit-like experience,” Fudge told me.

“It is something that you can layer, and have three or four drinks throughout the night, alongside someone that is drinking alcohol,” he said.

Positioned as an alternative to liquor, a shot of Aplós is supposed to give drinkers a “gentle calming and uplifting” feeling within 15-30 minutes, thanks in part to the company’s use of nano-emulsification technology that enables the human body to absorb water-soluble cannabinoids faster than traditional hemp extract oil.

Formulated in partnership with renowned mixologist Lynnette Marrero, the plant-based non-alcoholic spirit is vegan, gluten-free, non-GMO, sugar-free and contains 0 calories. A 16.9 oz. bottle includes about 8 servings and sells for $48 on the company’s online store.

Fudge is the former director of brand marketing at Bonobos, and Manley is a self-described “plant lover” who previously served on the board of iconic cannabis magazine High Times.

Their shared desire to help people disconnect from the fast-paced hustle of startup life informed the way they constructed the Aplós brand.

“I was feeling pretty burnt out and trying to find more balance,” Fudge said of his time in the startup world.

“When you think about this always-on society that we live in, most often the common way we deal with stress is with alcohol,” he added. “I like the experience of having a cocktail, but I don’t like the way it makes me feel after that initial drink.”

That’s why Fudge set out to create a product that could fit into alcohol occasions – like a beverage at the end of a long workday or a happy hour with friends – but without the hangover.

Aplós is currently being sold directly-to-consumers, but the company has plans to sell its product at upscale cocktail bars as well as off-premise retail stores.

“We definitely have a strategy to bring this brand to life offline, but COVID-19 has disrupted that somewhat,” Fudge said.

As it grows, additional products – including ready-to-drink offerings and those infused with THC – could be in the offing.

“Nothing is off the table,” Fudge said. “Consumers want alternatives. And we really want to be a part of leading a culture shift that I think is already underway and helping people rethink the way that we drink.”

I was fortunate enough to get my hands on a bottle before the official launch and can honestly say that Aplós is one of the most unique new products I’ve tried in 2020.

It has a strong citrus-forward flavor and a pithy bitterness that is at first overpowering on its own. However, when mixed with a dash of bitters, some tonic water and a squeeze of lime – a recipe I found on the Aplós website – the drinking experience becomes much more enjoyable.

I also sipped Aplós over ice with some grapefruit seltzer, and eventually came around to enjoying it neat.