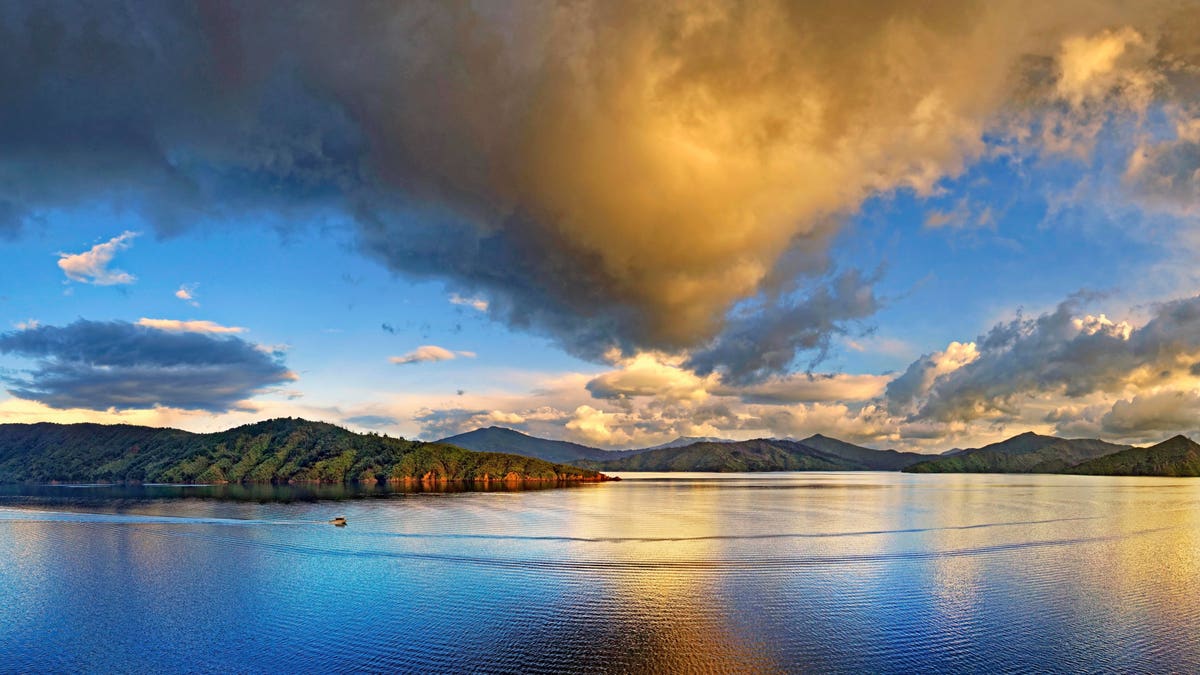 As a kid in Marlborough, New Zealand, Jules Taylor dreamt of another place that offered more options than the animal and vegetable/fruit farming that dominated her area in the late 1970s and 1980s. Her home was certainly a stunning place, such as it is today, tucked away on the North East corner of the South Island of New Zealand. Just one of the many natural wonders is the Marlborough Sounds – several ancient sunken river valleys – where one can witness penguins, dolphins and whales. But even in paradise, a curious young mind is drawn to something outside her remote utopia to find a wider range of opportunities and experiences. And that is why Jules always envisioned that she would live on the other side of the world and not be one of the common statistics of living only a few miles from where she was raised.

It is interesting to think that, for some, New Zealand started as a chance for a new life with more possibilities as the much more southern Central Otago was one of the largest alluvial gold mining areas in the world during the late 1800s; so many risked their lives, and gave their lives, at a chance of achieving an existence that went beyond a pauper’s destiny. Even in terms of giving the female population a voice, New Zealand was the first self-governing country to give women the right to vote in 1893, almost three decades before the U.S. nationally allowed it in 1920.

By the time Jules Taylor graduated from university in the mid-90s, New Zealand had become known for another industry rooted in farming – winemaking. Jules said that her undergraduate was a mixture of Zoology and Plasmid Microbial Science which were fun to delve into despite knowing that a solid job would not come out of it but there was the added benefit that the university was located in the largest town on the South Island, Christchurch. But she needed to “sort” herself out and take a postgraduate degree in something that would turn into a career and since the New Zealand wine industry was growing exponentially and building a solid reputation around the world in winemaking and viticulture, that seemed to be the best route for Jules; perhaps wine could ultimately be her best way to live in a foreign land.

But life often does not work out exactly the way one intends.

Falling More Deeply in Love with Wine via Italy

After her postgraduate work, Jules ended up back at home living with her parents getting her first job at a winery not far from home. At first she thought she would be only involved in the vineyards since farming was very much part of her life growing up but the utter magic of turning the grapes into wine completely enchanted Jules and so she started spending just as much time in the winery as the vineyards. It was around 18 months after receiving her first job, getting used to living back at home and settling in, when a friend asked if Jules wanted to work at a winery in Italy and it only took seconds for her to exclaim, “Yes, why not!” and this was the beginning of her “love affair” with working in Italy. She ended up going to Italy for eight vintages, working in Piedmont and Sicily, and since New Zealand is in the Southern Hemisphere and Italy is in the Northern Hemisphere, harvest takes place at different times of the year so it makes it possible to do back to back vintages.

Jules remembers that first time in Italy, in Piedmont, and how wild it was to work with varieties that she knew nothing about as it was truly exhilarating to be thrown into the ocean while learning to swim, so to speak, as a young person learning the winemaking ropes in one of Italy’s most prestigious wine regions. She could even still picture the little ‘Fiat Panda car’ that her and her friend would drive during their downtime to go into the town of Alba. “Before we even got out of the car we could smell truffle as the whole town smelled of it”, as she dreamily recalled her times being there during truffle festivals. The people, way of life and how wine was part of every meal in Italy made a lasting impression on Jules that she still cherishes today.

In many ways, this was more than she could have ever dreamt of and she really didn’t have a vision of being a famous winemaker or running her own winery as just being able to learn, discover and travel was more than enough.

In 2001, Jules was working for a contract crush facility that made wine for two well-known Marlborough wine producers and her boss told her that she knew how to make wine but she didn’t know about the rest of the industry so the company funded her own label. At the time, she though it would be fun and a great way to further learn as it never even occurred to her that she could ever quit her day job for this little moonlighting side gig. She made 400 cases of Riesling and Pinot Gris for her first vintage under the Jules Taylor label in 2001 and managed over the next nine years to have two kids, keeping up her day job and slowly grew the business while being less than a perfect wife as she joked that she never did the “laundry on time”.

At one point, her husband, George, had issues with work and so he decided to try his hand at growing the Jules Taylor wines into something that could feed their family. Jules got to the point that she had to leave her day job as her youngest kid started asking her why she no longer picked him up from school. “I felt awful,” Jules said, as she described the heartache of hearing her child say something like that to her and so she sat down with her husband to see if they could afford for her to leave her “real job” and George replied, “No, but let’s give it a go”.

But according to Jules, the timing was not ideal, “It was pretty frightening in the beginning as it turned out I left my real job a month before the global financial crisis.” Yet even with the ups and downs it still turned out okay and she stated that they will never be “millionaires” but she loves what she does, especially thinking of all the people she has met whether be it in her many years going to Italy or all the marketplaces she has traveled to around the world to introduce her Jules Taylor wines.

Time to Reflect on the Magic of the Process

The 2020 vintage, which was harvested earlier in the year, was one filled with anxiety, stress, disruption and isolation but was ultimately a chance to have the time to stand back and reflect on the whole process of wine for Jules. At first, they didn’t know if they would even be able to harvest as it was still questionable in the first few months if wine growers and winemakers were considered essential workers in New Zealand which, thankfully, they were considered essential. Her life, like so many, has been turned upside down as there is no traveling to promote the wines and even trips to her local supermarket have become limited. But it has given her time to realize that she still marvels at the act of turning grapes into wine, a great product that “makes us see the world differently” as well as transform a common meal into something so much more. “I have been doing this for a long time and I still get amazed by it,” noted Jules.

And perhaps that is one of the ways she knows that she is right where she wants to be as when she is hit by the worst of times, she still gets so much joy and fulfillment out of the bare-bones, non-glamorous side of her work. And in a way, the 2020 vintage, the 20th anniversary, perfectly encapsulates what is at the core of the Jules Taylor wines – the magic of the process only gets greater with time.

2020 Jules Taylor, Grüner Veltliner, Marlborough, New Zealand: 100% Grüner Veltliner. White pepper and fennel fronds on the nose and fleshy white peach flavors on the palate which had a beautiful balance between fresh acidity and the right amount of body.

2018 Jules Taylor, Pinot Gris, Marlborough, New Zealand: 100% Pinot Gris. A delicious Brazil nut quality on the nose that had flavors of golden apples and baking spices with a touch of fresh ginger.

2019 Jules Taylor, Sauvignon Blanc, Marlborough, New Zealand: 100% Sauvignon Blanc. Subtle notes of passion fruit with zingy lemon zest and vibrant acidity balanced by solid weight on the body and a hint of herbs on the finish.

2020 Jules Taylor, Sauvignon Blanc, Marlborough, New Zealand: 100% Sauvignon Blanc. Ripe mango and lime blossom on the nose with wet stones, pineapple and thyme on the palate with a nice amount of weight to balance out the fresh acidity – such a lovely balance with wonderful concentration.

2018 Jules Taylor, Late Harvest Sauvignon Blanc, Marlborough, New Zealand: 100% Sauvignon Blanc that was dried on the vines with some noble rot – botrytis. Orange marmalade with candied ginger and dehydrated pineapple with a spicy, bright finish that balances out the sweetness.

The following wines are called OTQ which stands for ‘On The Quiet’. The following explains the name in Jules’ words:

“The idea started with a perfect parcel of Sauvignon Blanc grapes, hidden at the back of the cellar in an old barrel, and kept ‘On The Quiet’ from the rest of the world (including husband George) until the very last moment…

The OTQ wines are all limited release, single vineyard parcels crafted in tiny quantities and made only in the best vintages.”

2018 Jules Taylor, OTQ Sauvignon Blanc ‘Meadowbank Vineyard’, Marlborough, New Zealand: 100% Sauvignon Blanc. This Sauvignon Blanc OTQ not only differs from the regular Jules Taylor Sauvignon Blanc because it is a single vineyard but it is also handled in the winery very differently. It is hand harvested, whole clusters pressed directly into the barrels using wild fermentation and it stays in barrel for around nine months. Rounder, richer with peach pie flavors and a creamier texture with more of the minerality showing through.