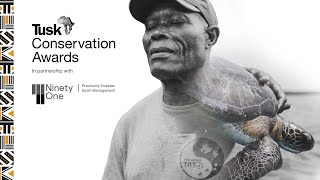 Floodlit by twinkling constellations, a midnight marathon has started on the beaches of Morro Peixe in Sao Tome, with competitors frantically racing for the surf. Spectating from side-lines like an anxious coach, Hipolito Lima wills his batch of baby turtle hatchlings to safely reach the sea, nervously checking there are no predatory gulls swooping overhead.

It’s a process that never gets easier for the tireless 70-year-old, who’s dedicated almost a third of his life to protecting sea turtles. With no academic background in conservation or formal training, it’s been a career fuelled by passion and love.

Now, his efforts have been rewarded with a Prince William Award for Conservation in Africa, presented by charity Tusk Trust in recognition of an outstanding individual’s lifetime achievements.

Although he grew up on West African island Sao Tome, Hipolito recalls he was an adult when he first saw a turtle nesting. American volunteer group Peace Corps had invited him to assist with research work on the four species using the coastline to breed.

Touched by the experience, he felt immediately connected to the charismatic marine creatures. Up until that point, he’d only ever seen them served on a dinner plate.

“When I was young, people would eat the meat and eggs of sea turtles,” he recalls. “My father would go out on fishing trips and bring home a turtle, leaving it for two or three days before finally killing it. Firstly, they cut the flippers and then they started to open the turtle while it was still alive. It was a very difficult thing to see.”

Once Hipolito understood the species’ struggles for survival in the wild, he found the unpalatable delicacy even harder to stomach.

“I think a lot about turtles as human beings because they have the same lifespan. When a sea turtle comes out of the water to nest, it’s like a woman giving birth to a child. How could my father and all these people do that to a turtle?” he says, still dismayed decades later.

Admirably, he chose to channel any anger into energetically protecting the species. In 2003, be helped found Programa Tato, an organisation set up to monitor beaches and spread awareness in communities.

In the beginning there were no funds and Hipolito worked voluntarily as a ranger and supervisor. Upset and confused, his family accused him of failing in his duties as a breadwinner.

“My wife never really accepted what I was doing,” says Hipolito, who refused to be deterred from his new vocation. “One day, she brought home a sea turtle and threatened to kill it. I told her, ‘OK, if you think that it will bring money for the whole month to pay the bills and to feed the family, then go ahead’.”

After some thought, she returned the animal to the ocean.

Convincing communities to change their habits is one of Hipolito’s strengths as a natural leader, even though he received many death threats in the early days. Along with fellow conservationists, he was also instrumental in campaigning for the introduction of a law banning the capture, possession, and sale of all sea turtle species and their by-products as well as disturbance of nesting habitats – finally passed in 2014.

“That law created the biggest change in peoples’ mindsets,” says the softly spoken activist. “They realised it was something real.”

Since then, the number of sea turtles captured has fallen from around 400 to almost 20 per year.

“Ten years ago, at this time of the season, we had already 50 or 70 sea turtles being killed. Nowadays, we don’t have even one,” claims Hipolito proudly, although he insists there’s still a lot of work to be done.

Today, he supervises several beach rangers, including some reformed hunters, and has a network of informants ready to share information about any turtles in danger. There are occasions, he says, when children will report their own parents to the police.

He’s also helped to establish alternative livelihood programmes for women who once traded turtle meat or souvenirs made from carapaces, retraining them to make handicrafts from local textiles and recycled plastics.

Working around the clock, Hipolito barely has time to reflect on his achievements and is still shocked and surprised by his nomination for such a prestigious award. He recounts words of encouragement relayed to him by a biologist from the Peace Corps when he first started out.

“He said that if I did a good job, one day I would be famous worldwide. But I never thought that would happen. I’m so honoured and grateful.”

Although the pandemic has forced the Tusk Awards ceremony online this year, Hipolito hopes the charity’s royal patron Prince William might visit Sao Tome one day.

“If he arrived in hatching season, I’d love to share a release with him; otherwise he could come and watch the migrating humpback whales,” he muses.

“Then of course I’d like to show him the local foods: callaloo, breadfruit. He would need to at least spend some hours in my backyard.”

Hipolito Lima is the winner of this year’s Prince William Award for Conservation in Africa, sponsored by Ninety One.

Frozen sand dunes created by climate change
Athens: What NOT to do in Athens, Greece
Dow Jumps 800 Points, Stocks Snap Three-Week Losing Streak After Inflation Expectations Ease
San Diego Gives You Seven Worlds in One!
How to choose the perfect paradise island in the Maldives