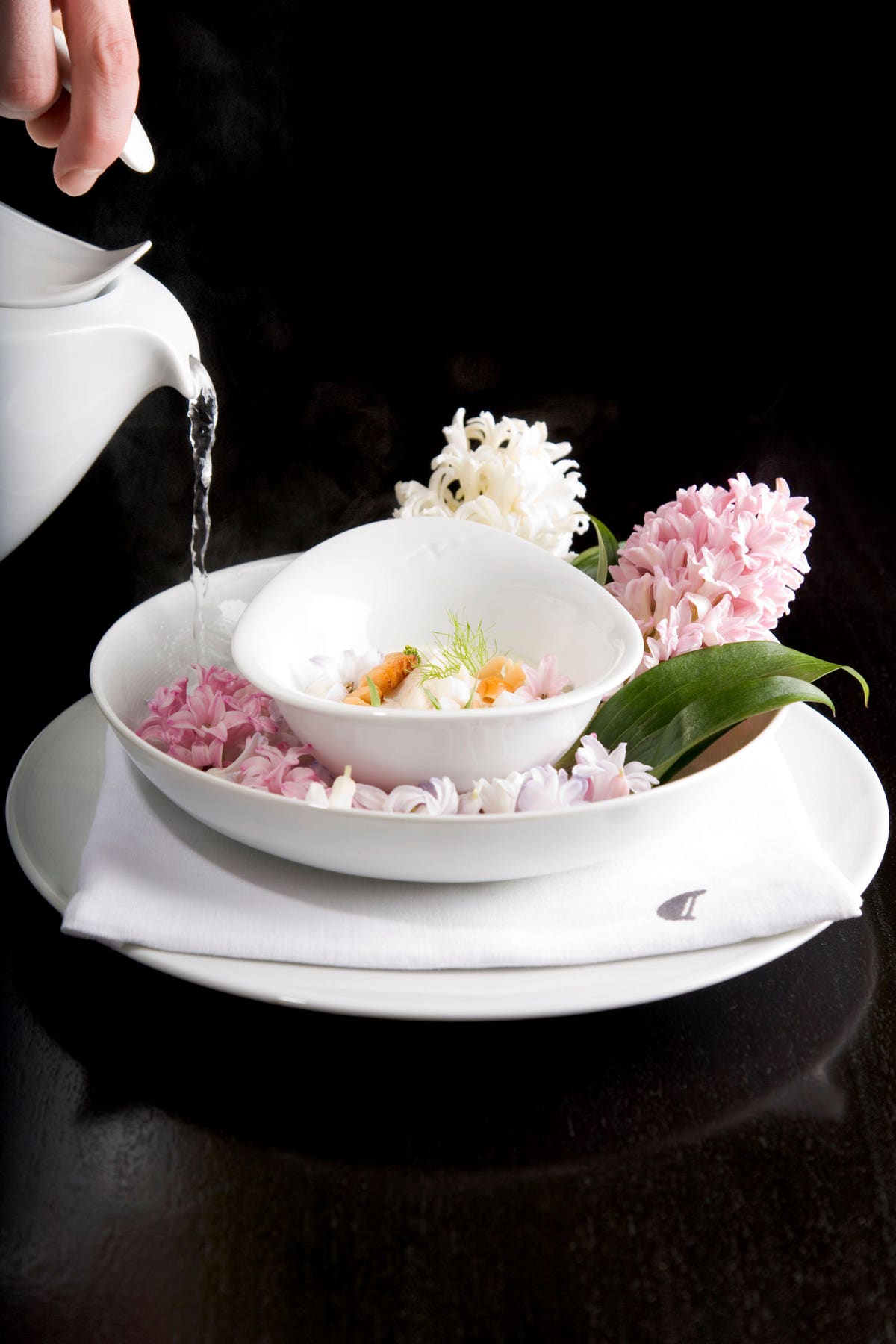 The most lavish takeaway meal you’ll probably ever experience is awaiting your order at Vespertine in Los Angeles this month. As curbside pickups go, Chef Jordan Kahn’s tribute menu to Chicago’s modernist pioneer Alinea — available through December 20 — is neither simple nor inexpensive. But true wonders are hidden inside each takeout container.

Kahn’s menu recreates dishes from Alinea’s inaugural year, when Kahn was a Muppet Baby pastry chef in the Michelin-starred kitchen of Grant Achatz. The items as listed on this month’s menu — “Bacon, butterscotch, apple, thyme,” “Beef elements of root beer” and so on — sound straightforward but Kahn is hardly the add-a-dash-of-this and dine type.

The ready-to-eat, individually plated small dishes — at $115 per person — are mini-masterworks of impeccable flavor and design. We ordered the DIY family-style version that lets you build the dishes yourself (still a splurge at $95 a person). Although the prep was a joy from start to finish, the tweezing and frothing and searing of ingredients took nearly four hours from cocktails through dessert (an Achatz-inspired Jackson Pollock-style table-splattering of white chocolate, gingerbread, peppermint and more).

Kahn’s been thriving during the pandemic, with a series of big-deal pop-ups (like the French Laundry-themed one he did in May) and wallet-friendlier meal kits, at $49 a person, that are more like family dinners. I asked him this week about the Alinea tribute and how he’s staying creative (and sane) at this most difficult time.

Vespertine doing takeaway is like Salvador Dali showing up to paint your living room. How challenging was it to reinvent and elevate pick-up orders in the midst of a pandemic?

Jordan Kahn: Challenging.  I had a feeling from the onset of COVID-19 that this was not going to be a blip and that the situation would linger for at minimum six months.  After about a day of pouting, I decided to put together a simple and inexpensive menu for pick-up. We thought we would only serve 20 or 30 per day, so we decided to open up our bookings on Tock at 8 am on the Thursday  following the initial closure.  By 9 am, my reservations manager called me and said “we are over 150 orders for today and are over 150 orders for the next 7 days. What would you like me to do?”

So, what did you do?

Jordan Kahn: We pushed through. Once we got through that week, we realized quickly that there was interest in this platform. Rather than dipping our toes in the pool, I would say we cannon-balled into the take-out format.  We thought, if we’re going to be forced into this platform as our only pipeline, then we will do it our way.  It feels a bit like we’ve lost home court advantage, so we are having to exercise muscles that we didn’t originally have.

We still wanted to remain true to our ethos and process, so we began working on clever ways for guests to have a Vespertine experience at home, expressive of the menu’s theme. We essentially transitioned all of our service team into a full-scale Santa’s workshop of packaging. Folding avocado leaves around homemade butter, wrapping tortillas in traditional Maya textiles. We made the trademark French Laundry “cornet fold” out of linen-like napkins, filling wood boxes with warm river stones, wrapping oshibori towels with traditional Japanese washi paper. We got creative.

You’re modeling your menu after those from Alinea, where you got your start with Grant Achatz. The meals are available in ready-to-dine form. But you also give customers the option of building the meal as a DIY project.

Jordan Kahn: That’s right. We provide all of the components for our guests to recreate their own version of the tasting menu. We give the basic instructions for preparation, but this is really their chance to feel a little bit of what it’s like to be a chef.

Walk us through two or three standout dishes on this menu and what excites you most about them?

Jordan Kahn: The oyster cream dish was one of my favorites. It originally came off of the canapé station which was right next to mine, so I often helped with the preparation of that dish. I always loved the idea of using lychee in place of oysters for their  gelatinous texture.  The chocolate dessert is also very dear to me, as it was one of the first dishes [Empellon chef and cofounder] Alex Stupak and I collaborated on. The twisted ganache was one of Stupak’s most notable creations, and we developed the remaining components together to create a really delicious dessert that found its way through to many pastry kitchens around the world.

Outside Vespertine’s kitchen what are you doing to stay sane in this stressful time? What’s your self-care or escape or listening/viewing/ imbibing regimen like?

Jordan Kahn: Well, there haven’t been any days off since the pandemic began, so I’m not sure I’m a good judge of what is  sane anymore. Most of what’s left of my energy is spent with my girlfriend doing simple rituals like eating dinner at 4 am, going to see the full moon  on the roof of the Vespertine tower, and listening to records at home. On the turntable right now is an original pressing of the Godspeed You! Black Emperor album, F# A# , that my girlfriend got me as a birthday gift.

What’s the status of your Hollywood pop-up, Ephemera, and how would you describe it in a sentence or two?

Jordan Kahn: Ephemera is a Vespertine project which is inspired by mineralogy. As Vespertine is unable to open for dine-in, Ephemera will be a temporary dining experience housed in an outdoor courtyard dining room.

Hmm. Mysterious. What else is next? What are you most excited about as you look to the future?

Jordan Kahn: I’m mostly looking forward to having our Vespertine dine-in service back. We are working on some really exciting concepts for the menu and experience and are eager to welcome our guests back into the tower.

Getting back to the Alinea menu, what’s the percentage of customers doing DIY versus ready-to-dine?

Jordan Kahn: It varies per night. We started off with around 20-30% doing DIY and now it is closer to 40% “Be The Chef” menus versus 60% Tasting Menus.

Do you have a hotline or chef-housecall service for people to call if they suddenly feel overwhelmed by the duck searing and bacon-hanging and table painting?

Jordan Kahn: Absolutely. Our phone is available anytime for guests to call and inquire about the menu and preparations. I walked someone through how to poach fish sous vide and twist chocolate ganache the other night. People are having a lot of fun, which is the best feedback we could possibly get.

This interview has been edited and condensed for clarity.

The adventurer twins exploring the most remote parts of the world
TorfhÃs Retreat: Icelandâs Secluded Haven of Hospitality
Frozen sand dunes created by climate change
Nepal may move Everest Base Camp
Where do you need reservations for a Hawaii (Big) Island vacation?