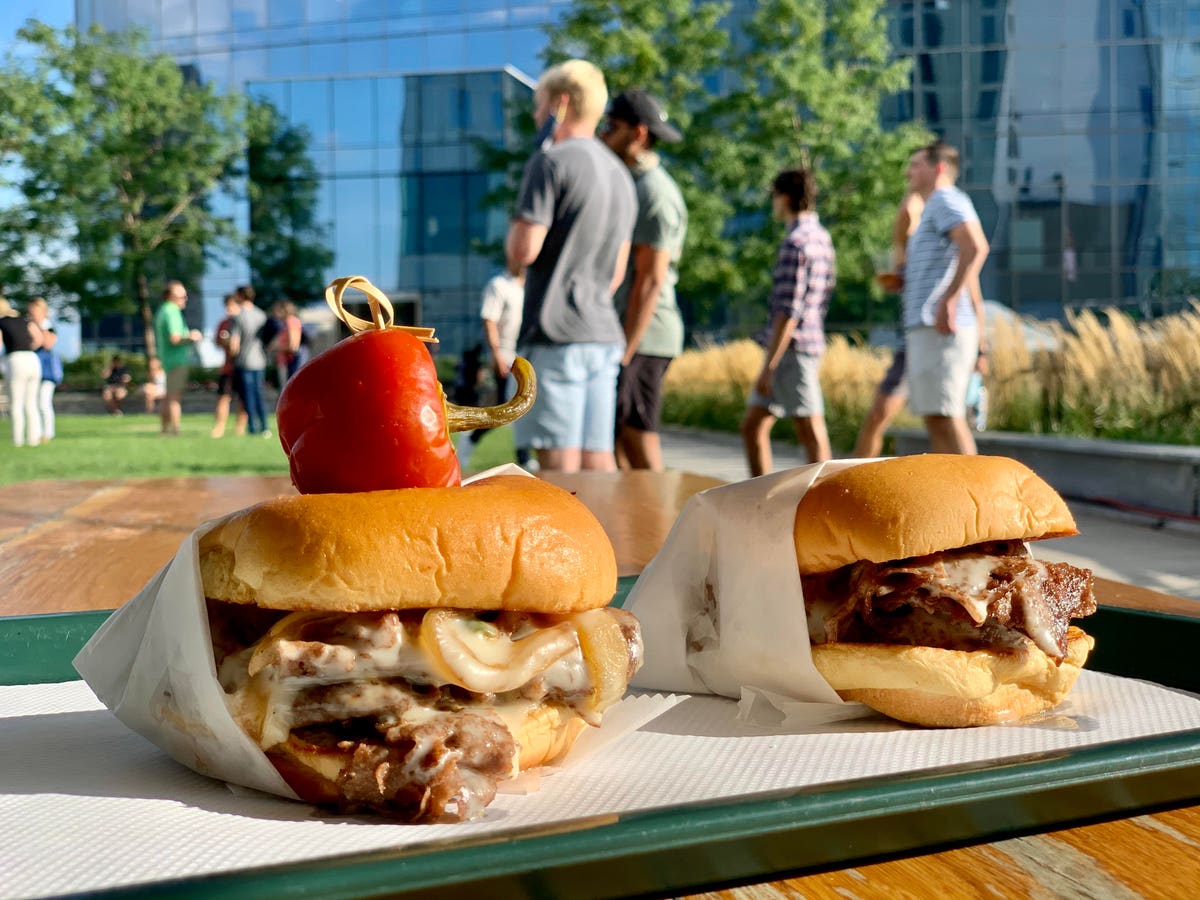 When fine-dining veteran Branden McRill launched his first three Philadelphia restaurants, he bet everything on one house: Cira Centre South, a gleaming new multi-use high-rise in West Philly. The building felt prime for foot traffic, what with its AKA extended-stay hotel, residential units and offices right in the middle of the city’s university and hospital district and adjacent to its Amtrak station and primary transportation hub. Feeling quite confident, he sited the tony Walnut Street Cafe on ground level, the sprawling Post sports bar next door and the seasonal Sunset Social concession in the public rooftop park.

But that was the before times. No thanks to COVID, most of that traffic dried up in the spring of 2020, leaving McRill with 14,000 square feet of mostly unusable real estate. Instead of panicking, he pivoted.

“In this moment people have the opportunity to change with the world and innovate to give people what they want before they even know they want it, and this is the perfect moment to do it,” he says.

McRill appears to be the first in Philly to adopt a contemporary model of food service called a ghost food hall, in which he puts his underutilized staff to work in his underutilized kitchens to cook up a multitude of trial food concepts for take-out, delivery (through platforms like GrubHub
), and, when possible, dine-in. This is no mere menu expansion. Though they don’t have their own brick-and-mortar footprints, each concept gets a name, an online brand and a full array of its own food options that to-go customers can mix-and-match and on-premises patrons can order while dining at The Post.

It’s an even more modern spin on a trending innovation called a ghost kitchen, which usually exists exclusively online for delivery and sometimes take-out. Working with a panoply of different models, ghost kitchen chefs can pop-up a casual, virtual concept in their existing restaurant kitchens, like Philadelphia celebrity restaurateur Stephen Starr is doing in Washington, D.C. They can also join a commissary or rent a mini-kitchen in an incubator-like space to push out meals without the overhead of a directly public-facing ordering or service system. The Philadelphia Inquirer reports that a Los Angeles-based chain called CloudKitchens runs both of the latter type of culinary co-working spaces in Philly, with one opening back in late 2018.

Most ghost kitchens offer just one concept, either at a time or ever. McRill, on the other hand, plays on the food hall arrangement — basically an updated take on a food court — that was rising in popularity before the pandemic hit. When he launched his ghost kitchens in the fall, he started with three, in addition to his existing real-life places: a virtual French bistro (Ghost Chicken), a wing joint (Philadelphia Wing Shop), and a Mediterranean cafe (Agea). He’s since added an ice cream parlor called Maude & Mabel’s Fine Creamery, where he pre-scoops and freezes individual servings with the expectation that they’ll be perfectly ready to eat by the time the delivery service gets them to their destination.

This virtual food hall model, which he calls The Commons, now makes up 25-30% of gross sales, and the French-style Ghost Chicken enjoyed one week when revenues shot up more than 363%. At first, he took fewer than five orders per place per day. These days it’s more like 20-30 and counting.

“I’m trying to create ultimate optionality,” he says. “It doesn’t mean quality has to change. It just means the way people are consuming it will change.”

Make no mistake, he’s still bleeding multiple millions of dollars and growing, down 67% at his “real” restaurants. But he’s exceptionally excited to try something he’s had in mind for a while.

“This is a pandemic silver lining,” says the veteran of such culinary landmarks as Chicago’s Alinea and empires run by Danny Meyer, Jean Georges Vongerichten and Marcus Samuelsson. “This is 100% something I’ve been thinking about since age 15.”

But ghost kitchens don’t appear to be a mere flash in the pandemic. Though the United States
can only count a few scattered ghost halls as of yet, Euromonitor estimates 1,500 ghost kitchens currently operate here, including those run by national chains like Fat Brands and Chipotle. It estimates 3,500 in China and predicts $1 trillion in global sales by 2030.

McRill is ready for the long term. Not only does he relish the scaling possibilities and expect to convert his more successful concepts into physical storefronts, he’s worked with a development team to custom design a unique system of tools that use machine learning and artificial intelligence to make real-time decisions that should allow him to simultaneously peer far into the future.

“Every time a piece of data comes in, we see who orders it, what time, what delivery platform, what else they order. It allows us to anticipate future outcomes, and it’s really fun to gamify it,” he says.

McRill says the wing shop resonates most with his customers, followed by Ghost Kitchen, then Agea. Agea, which specializes in relatively healthy Mediterranean light fare, performs well at lunch but not as well as it would if more people had gone back to working in offices. Ghost Chicken targets dinner time but is experiencing a bit of a slump as the colder weather compels the public to start cooking more again, and the wing shop’s popularity derives from its accessibility in terms of price and small-to-large orders.

Mindful that a fast-casual delivery order will never equate to the experience of dining at a full-service establishment, where the ambiance and ritual matters as much as the food, he doesn’t accept The Commons orders at Walnut Street Cafe, though its dishes can be ordered to-go through the same portal. He’s lucky to have the 7,000 square foot Post to mimic the atmosphere of a food hall, where eat-in patrons typically care a bit more about what he describes as the “community and connectivity” than what’s on their plate.

Obviously, the investment to boot up a virtual start-up pales compared with a brick-and-mortar business. Whereas he says it can cost anywhere between $250,000 and upwards of $10 million to open a restaurant, he paid less than $30,000. That’s about $10,000 each for a team of developers, the website and R&D (including time).

“There’s no reason to be constrained within a box,” he says, “both literally figuratively.”

The Caymans: a beginner’s guide – Lonely Planet travel video
Yellowstone reopens south loop with limited capacity after unprecedented floods
The world’s most liveable cities for 2022
How to choose the perfect paradise island in the Maldives
What sitting in economy on Qantas’ 20-hour flights will be like