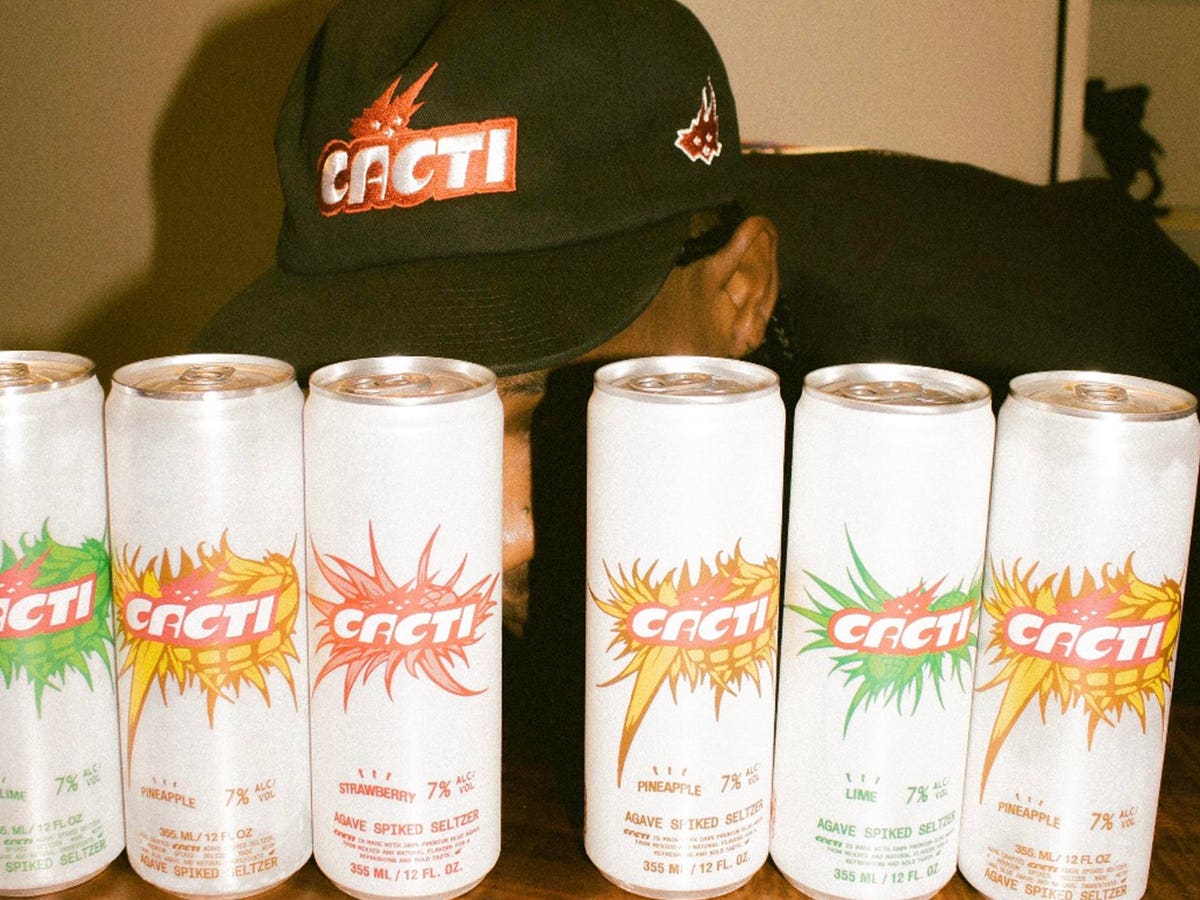 After dropping hints to the release late last month in our cover story, Travis Scott has officially announced his hard seltzer line CACTI.

Made in partnership with beverage giant Anheuser-Busch, CACTI agave spiked seltzers will be hitting shelves in the spring of 2021.

Drawing inspiration from the multihyphenate’s love of tequila, CACTI is made with 100% premium blue weber agave and will be available in a range of flavors—lime, pineapple and strawberry among them. The product will be sold in 12-ounce, 16-ounce and 25-ounces cans.

“CACTI is something I’m really proud of and have put a ton of work into. Me and the team really went in, not only on getting the flavor right, but on thousands of creative protos on everything from the actual beverage, to the can concept, to the packaging and how it is presented to the world,” says Scott in an official statement. “ We always try to convey a feeling in our products. I’m a big fan of tequila so I came at it from that angle, too. I’m really excited to put this out in 2021 and see other people be able to enjoy it.”

With this announcement, Scott is officially entering the fray of the booming $3-billion hard seltzer industry.

Over 2020, hard seltzer and the RTD category saw unprecedented growth. Drinks market analysis firm IWSR noted that over the last few years the hard seltzer sector has boomed, growing by 346% in 2017, 246% in 2018, and 214% in 2019. The category is forecasted to grow 157% in 2020, with the IWSR expecting total volume consumption of RTDs (led by hard seltzer) in the US to surpass that of spirits consumption this year.

Grand View Research expects the category to be worth $14.5 billion by 2027, showing a 16.6% CAGR growth between now and then.

But the craft segment of the industry is looking to overshadow the major players—Drizly noted in their year-end that a third of retailers are looking to fast-proliferating craft entries to keep the category thriving.

With that in mind, the category has been expanding at a breakneck clip to account for consumer demand for new flavors, craft brands, and more premium products.

Beverage giants are clamouring to release their own iterations: Coca-Cola
has a boozy Topo Chico hitting the market next year, while Bud Lite and Coors both launched hard seltzers.

Hard seltzer became not just a new beverage category—the cans have quickly became part of the cultural lexicon, finding their way into the hands of college drinkers, yoga moms and seemingly everyone in between. Even beer drinkers: In August of 2020, White Claw, Truly, and Bon & Viv outsold the top six beer brands (Budweiser, Bud Light, Coors, Coors Light, Miller and Miller Lite) combined.

And just like hard seltzer, Scott is heavily ingrained in the zeitgeist.

His recent Mcdonald’s collaboration was so popular restaurants couldn’t keep up with inventory. “Travis is a cultural icon,” says Jennifer Healan, vice president of U.S. marketing for McDonald’s to Forbes. He pocketed $5 million from the original endorsement, and an additional $15 million from merchandise sales, including boxer shorts and a McNugget-shaped body pillow.

This year Scott has also partnered with General Mills, Hot Wheels, and PlayStation.

Though Anheuser-Busch already has BudLight’s hard seltzer, this partnership will position the company to really compete in the hard seltzer sector.

“We are all about delivering what consumers want, and as a culture-shaping artist, Scott is incredibly connected to his fans and what’s new and next in culture,” said Fabricio Zonzini, President of Beyond Beer at Anheuser-Busch.