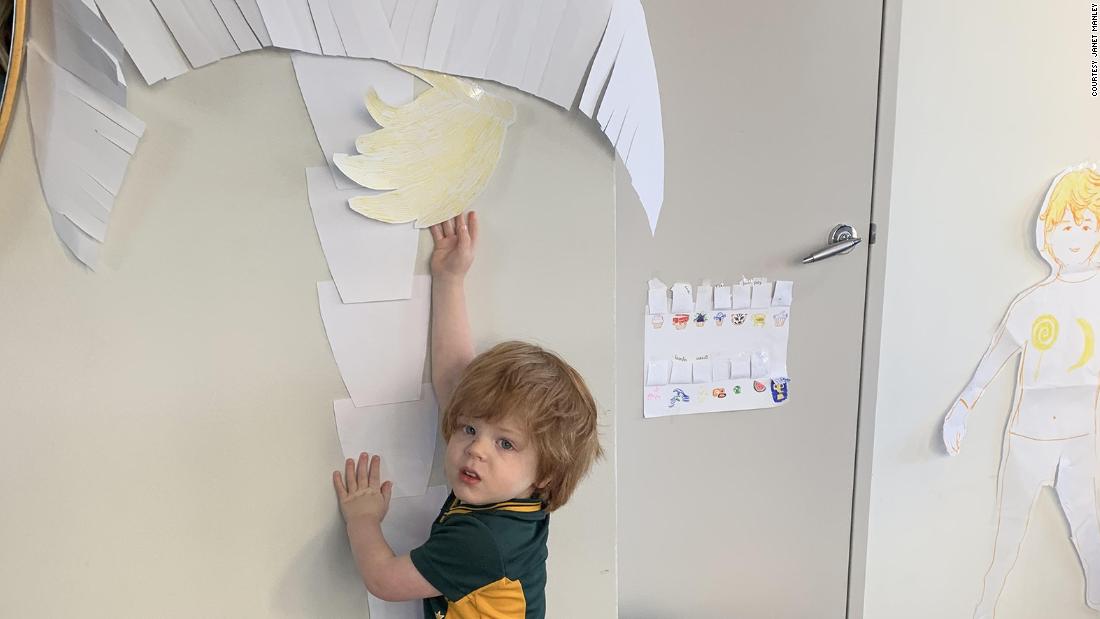 (CNN) — Imagine spending two weeks in a strict quarantine, not allowed to go anywhere beyond a small hotel room even to eat or exercise.

Now, imagine doing all of that — with children.

That was the situation Julie Earle-Levine, an Australian who lives in New York City, found herself in earlier this year when her father died unexpectedly. In a normal year, she would have made a last-minute flight booking and gotten to Oz as quickly as possible.

But Australia’s strict entry rules meant that Earle-Levine’s family had to agree to postpone the funeral for several weeks so that she and her 13-year-old son Jack could make it to Australia, go through a mandatory quarantine in a hotel, and then join the rest of the family in Queensland.

She isn’t alone. The coronavirus pandemic has halted global travel and caused many countries to close their borders to non-citizens.

The people who need to travel have to go through an obstacle course of Covid tests, entry caps, canceled and rescheduled flights and mandatory quarantines. When you add more people to the equation, the challenges become harder.

Here, three parents tell CNN Travel how they turned enforced quarantine time into opportunities to connect with their children during exceptional circumstances.

Jack Levine peers out the window of the Meriton Suites Hotel in Sydney.

Like Earle-Levine, Janet Manley is an Australian who lives in the United States. After Manley was let go from her job during the pandemic, she and her husband decided to take their two young kids to Australia and spend time with Manley’s family.

Taking two energetic children — Scout is five and Japhy is three — on a long international flight can be difficult enough, but two adults and two kids cooped up in a hotel suite for 14 days proved to be an entirely different kind of challenge.

Scout and Japhy watch a video in their Sydney hotel suite.

“I think that if you have kids during the pandemic you are in a way at an advantage,” Manley says. “There is no time to sit and think about where you are and watch the minutes tick by, because they’re very demanding and they keep you busy.”

Still, that didn’t make quarantine painless. Manley tried to get as creative as possible when it came to keeping the kids entertained. Her best advice is to pick up a huge roll of butcher paper, which the kids used for everything from drawing pictures to tracing themselves on the ground.

The family also watched kid-friendly yoga videos and made an advent-style calendar to count down the number of days to seeing Grandma and Grandpa.

Tim Benson’s wife’s maternity leave coincided with the pandemic, leaving the couple feeling antsy at home with their infant son. Rules and restrictions changed constantly, and the Bensons decided to visit the Caribbean island of St Lucia while they still had the chance.

The situation was slightly different there than in Australia, as St Lucia’s borders weren’t closed. Instead, the country had a travel corridor with the UK.

However, that didn’t mean that visitors could simply show up and hit the beach. The corridor rules meant that the Bensons couldn’t leave their resort, which suited them fine — they had visited the island before and didn’t feel like they were missing out on sightseeing.

Benson likens being confined to an upscale resort to being in a gilded cage. The family had to rely on the resort for all of their meals and other needs, which meant that costs added up quickly. They planned ahead by packing heavy, bringing plenty of diapers, baby food pouches and other necessities with them so they didn’t have to order them from pricey on-island shops.

Once at the resort, the Bensons split up caregiving duties. They are both keen scuba divers, so one parent would dive in the morning while one stayed with their son, and they would swap in the afternoon.

Still, despite being in the same location where they’d spent their honeymoon, it wasn’t a romantic getaway.

“What you can’t really do is spend a lot of time just the two of you. It’s a holiday for three.”

It was the first time that the couple had parented their son away from home, without their usual creature comforts. The resort’s babysitting services were suspended and the kids’ club closed. Only one of the resort’s restaurants was open, and other amenities were limited amid the pandemic.

Manley and her kids created a calendar to count down the number of days left in quarantine.

“The first week was hard,” Benson admits. “We had a lot of question marks. It’s still a sharp learning curve as parents when you take a young child away for the first time. You’re responsible for him all the time and you don’t have your home setup, but you get used to it. You find your rhythm. The second week it was quite natural.”

Despite some of the challenges of traveling with a baby and the logistics of pandemic-era travel, Benson says he would do it again in a heartbeat.

“If you really, really need a holiday and you’re at your wit’s end, then do it, as long as you’re going to a country that it’s ethical to go to.”

Bonding (and grieving) in captivity

Earle-Levine and her son had different approaches to staying busy during quarantine. Jack adapted his usual activities — kicking a tennis ball around the suite instead of playing soccer, and watching chess games on Twitch instead of playing against friends.

Unlike the younger kids in quarantine, he was able to entertain himself, freeing up his mom to take care of her own schedule.

Earle-Levine, in return, threw herself into work. A PR professional with many clients based in Australia, she took advantage of being in the time zone and said yes to every meeting, catchup and phone call she could. Staying occupied helped to pass the time, but it also meant she didn’t have the ability to wallow in her grief.

“I just stacked meetings and worked hard every day and then at night we just watched TV and really relaxed together,” Earle-Levine says of a typical day in lockdown.

“We really didn’t even have one fight, and in New York we bicker all the time. There was a bit of mutual respect. We turned the corner.”

Still, she admits there were hard parts. She hated the hotel food and had meals sent from some of her favorite restaurants in Sydney instead. And when Jack was kicking around his tennis ball, she turned on her hair dryer to drown out the noise. They also amused themselves by coming up with hypothetical escape plans.

“I wouldn’t line up to do it again,” Earle-Levine admits, but adds, “The whole thing was so, so worth it, of course.”

Despite the challenges of traveling during Covid-19, each of the parents CNN Travel spoke to has considered what their kids’ future memories of the pandemic will be.

Manley believes that kids are more resilient when it comes to handling the so-called new normal, and that grownups can learn from them.

“Kids have nothing to compare anything against,” she points out. “Their expectations are nil. If you can show them what you’re going to do today and help them understand, they can handle it. Kids can handle anything.”

What sitting in economy on Qantas’ 20-hour flights will be like
Pride Treats That Give Back In New York City
MY EARLY BIRTHDAY MEAL
Current Foods Raises $18 Million To Accelerate The Expansion Of The ‘Beyond Meat Of Seafood’ Across B2B And Retail
Regent Phu Quoc, The Newest Gem on The Pearl Island