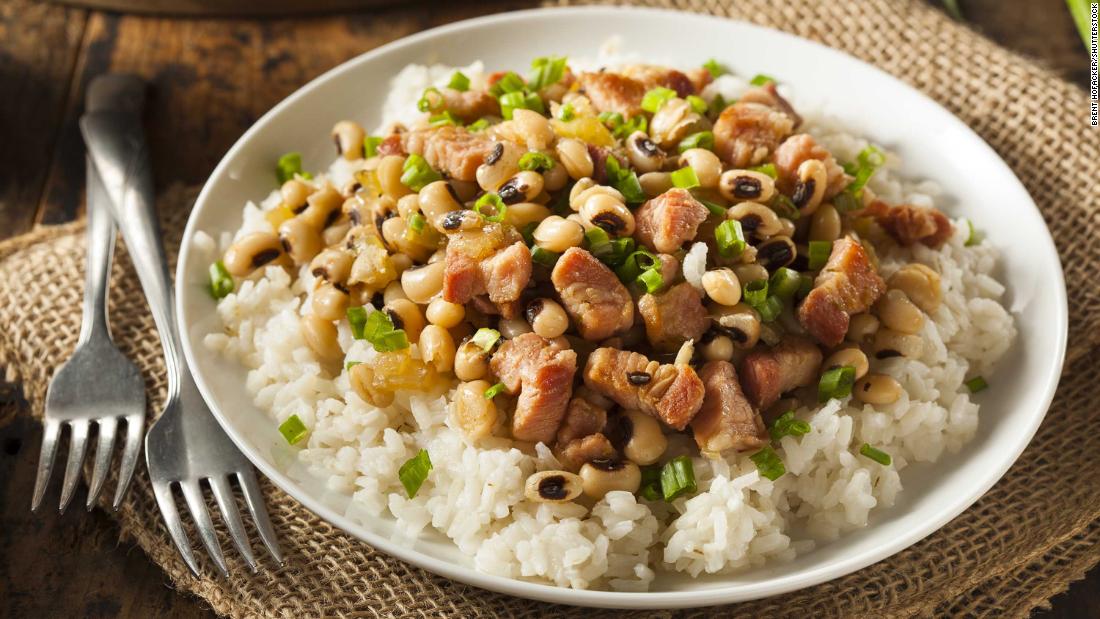 The particulars vary, but the general theme is the same: Enjoy food and drink to usher in a year of prosperity.

Here are some of the common food New Year’s food traditions around the world:

Field peas or black-eyed peas are the base for Hoppin’ John.

A major New Year’s food tradition in the American South, Hoppin’ John is a dish of pork-flavored field peas or black-eyed peas (symbolizing coins) and rice, frequently served with collards or other cooked greens (as they’re the color of money) and cornbread (the color of gold). The dish is said to bring good luck in the new year.

Different folklore traces the history and the name of this meal, but the current dish has its roots in African and West Indian traditions and was most likely brought over by slaves to North America. A recipe for Hoppin’ John appears as early as 1847 in Sarah Rutledge’s “The Carolina Housewife” and has been reinterpreted over the centuries by home and professional chefs.

The dish reportedly got its name in Charleston, South Carolina, and it is a veritable staple of Lowcountry cooking.

In Spain, they bring in the new year with 12 grapes. The tradition has spread to many Spanish-speaking countries.

The people of Spain traditionally watch a broadcast from Puerta del Sol in Madrid, where revelers gather in front of the square’s clock tower to ring in the New Year.

Those out in the square and those watching at home partake in an unusual annual tradition: At the stroke of midnight, they eat one grape for every toll of the clock bell. Some even prep their grapes — peeling and seeding them — to make sure they will be as efficient as possible when midnight comes.

The custom began at the turn of the 20th century and was purportedly thought up by grape producers in the southern part of the country with a bumper crop. Since then, the tradition has spread to many Spanish-speaking nations.

Tamales get special attention in Mexico during the holiday season.

Tamales, corn dough stuffed with meat, cheese and other delicious additions and wrapped in a banana leaf or a corn husk, make appearances at pretty much every special occasion in Mexico. But the holiday season is an especially favored time for the food.

In many families, groups of women gather together to make hundreds of the little packets — with each person in charge of one aspect of the cooking process — to hand out to friends, family and neighbors. On New Year’s, it’s often served with menudo, a tripe and hominy soup that is famously good for hangovers.

Those who live in cities with large Mexican populations shouldn’t have much trouble finding restaurants selling tamales to go for New Year’s Eve and Day. In Mexico City, steamed tamales are sold from vendors on street corners day and night.

An oliebol is a doughnut-like product, traditionally made and consumed in the Netherlands during the New Year’s celebrations.

In the Netherlands, fried oil balls, or oliebollen, are sold by street carts and are traditionally consumed on New Year’s Eve and at special celebratory fairs. They are doughnut-like dumplings, made by dropping a scoop of dough spiked with currants or raisins into a deep fryer and then dusted with powdered sugar.

In Amsterdam, be on the lookout for Oliebollenkraams, little temporary shacks or trailers on the street selling packets of hot fried oliebollen.

5. Marzipanschwein or Glücksschwein, Austria and Germany

Fresh marzipan made in the shape of little pigges.

Austria and neighbor Germany call New Year’s Eve Sylvesterabend, or the eve of Saint Sylvester. Austrian revelers drink a red wine punch with cinnamon and spices, eat suckling pig for dinner and decorate the table with little pigs made of marzipan, called marzipanschwein.

Good luck pigs, or Glücksschwein, which are made of all sorts of things, are also common gifts throughout both Austria and Germany.

Many Japanese slurp down bowls of delicious Soba noodles to welcome the new year.

In Japanese households, families eat buckwheat soba noodles, or toshikoshi soba, at midnight on New Year’s Eve to bid farewell to the year gone by and welcome the year to come. The tradition dates back to the 17th century, and the long noodles symbolize longevity and prosperity.

In another custom called mochitsuki, friends and family spend the day before New Year’s pounding mochi rice cakes. Sweet, glutinous rice is washed, soaked, steamed and pounded into a smooth mass. Then guests take turns pinching off pieces to make into small buns that are later eaten for dessert.

7. King cake, around the globe

The French do enjoy their galette des rois.

The tradition of a New Year’s cake is one that spans countless cultures. The Greeks have the Vasilopita, the French the gateau or galette des rois. Mexicans have the Rosca de Reyes and Bulgarians enjoy the banitsa.

Most of the cakes are consumed at midnight on New Year’s Eve — though some cultures cut their cake on Christmas or the Epiphany, January 6 — and include a hidden gold coin or figure, which symbolizes a prosperous year for whomever finds it in their slice.

Cotechino con lenticchie is the yummy Italian pairing of sausage and lentils.

The meal ends with chiacchiere — balls of fried dough that are rolled in honey and powdered sugar — and prosecco. The dishes find their roots in Modena, but New Year’s Eve feasts thrive across the country.

Rolled herring in vinegar, served with onions and pickles.

Because herring is in abundance in Poland and parts of Scandinavia and because of their silver coloring, many in those nations eat pickled herring at the stroke of midnight to bring a year of prosperity and bounty. Some eat pickled herring in cream sauce while others have it with onions.

One special Polish New Year’s Eve preparation of pickled herring, called Sledzie Marynowane, is made by soaking whole salt herrings in water for 24 hours and then layering them in a jar with onions, allspice, sugar and white vinegar.

Scandinavians will often include herring in a larger midnight smorgasbord with smoked and pickled fish, pate and meatballs.

This is a traditional Norwegian marzipan ring cake.

Kransekage, literally wreath cake, is a cake tower composed of many concentric rings of cake layered atop one another, and they are made for New Year’s Eve and other special occasions in Denmark and Norway.

The cake is made using marzipan, often with a bottle of wine or Aquavit in the center and can be decorated with ornaments, flags and crackers.

This article was originally published in December 2012. CNN’s Forrest Brown updated the article for 2020.

Travelers are upset about rising costs, but most aren’t canceling their plans just yet
Frozen sand dunes created by climate change
Upscale Stay at Four Seasons Seattle
CDC lowers the Covid-19 travel risk for 2 nations in Europe
Unwind at The Westin Riverfront