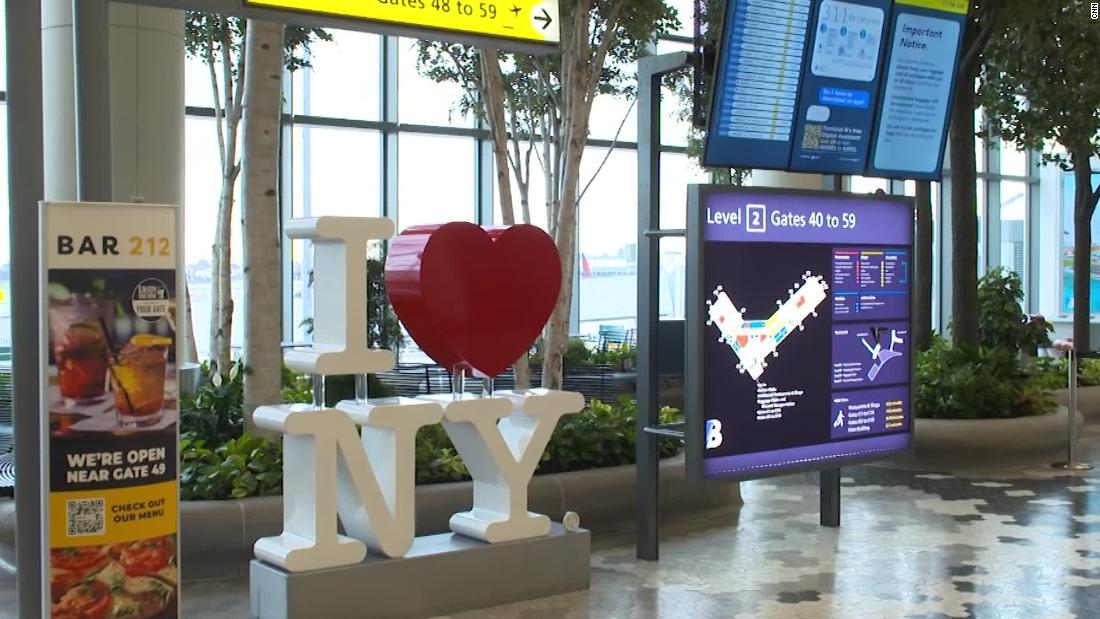 But while the aviation industry has been decimated by the Covid-19 pandemic, LaGuardia Airport has been quietly undergoing major renovations.

And now, $8 billion later, the new Terminal B is almost finished.

“New Yorkers love to criticize, and they love to hate. I think if you looked at every single passenger survey, LaGuardia was always the worst,” says Rick Cotton, executive director of the Port Authority of New York and New Jersey.

“Our challenge was to take it from worst to first,” he tells CNN.

Today, filled with art installations including one of the largest mosaic walls in the US, and even a breathtaking water feature which projects images of New York icons such as the Statue of Liberty and the Brooklyn Bridge onto a cascading fountain, LaGuardia is a very different place.

Passengers for Air Canada, American Airlines, Southwest and United — which are all housed at the new terminal — have been enjoying the new public spaces since the summer.

A plane takes off from New York’s LaGuardia Airport on December 3, 2020.

From worst to… best?

It was Joe Biden’s comments in 2015 that sparked the renovation effort.

New York authorities green-lit the works after the then-Vice President said, “If I blindfolded you and took you to LaGuardia Airport in New York you’d think I must be in some third-world country.”

The central terminal, B, was built in 1964, and had barely changed since then.

And LaGuardia was, according to travelers, among the most outdated, noisiest and least accessible airports in the country. Not to mention its on-time record, which was one of the worst in the United States.

The redevelopment is the largest public-private partnership in US aviation history, and is still only 80% complete — there are still some last gates to demolish and reopen. The project will be fully completed in 2022, and will see three out of the four terminals completely redeveloped.

But for now, travelers in Terminal B can enjoy the new breezy, light-flooded departures hall, its entire back wall covered in Laura Owens’ colossal, 25,000-square-foot mosaic mural, “I NY,” in which NYC icons, such as signs for the Stonewall Inn, Apollo Theater, and Coney Island’s Cyclone roller coaster, are depicted against a background of blue skies and fluffy white clouds. It’s accompanied by a monumental aviation-themed sculpture by Sarah Sze, “Shorter than the Day,” hanging in mid-air.

In the Connector area is Sabine Hornig’s “La Guardia Vistas,” a modern stained glass installation (of latex ink and vinyl mounted on glass) pairing over 1,100 photos of New York City into a cityscape in honor of the airport founder and former NYC mayor, Fiorello La Guardia.

Jeppe Hein’s 70 steel balloons dangle from the ceiling throughout the terminal, and his bench sculptures provide photo-friendly seating.

Free Covid tests for all

2020 isn’t the best year to be relaunching an airport.

When New York was the US center of the epidemic in March, passenger numbers across the city’s three airports plummeted by an astonishing 98%. Numbers are still down 75-80%, according to Cotton.

But the airport is offering free Covid tests, alongside the art, to attract passengers back.

Cotton thinks the offering — which spans 840,000 square feet and four floors — is now “best in class.”

The Port Authority will be hoping that more travelers get to experience it in 2021.