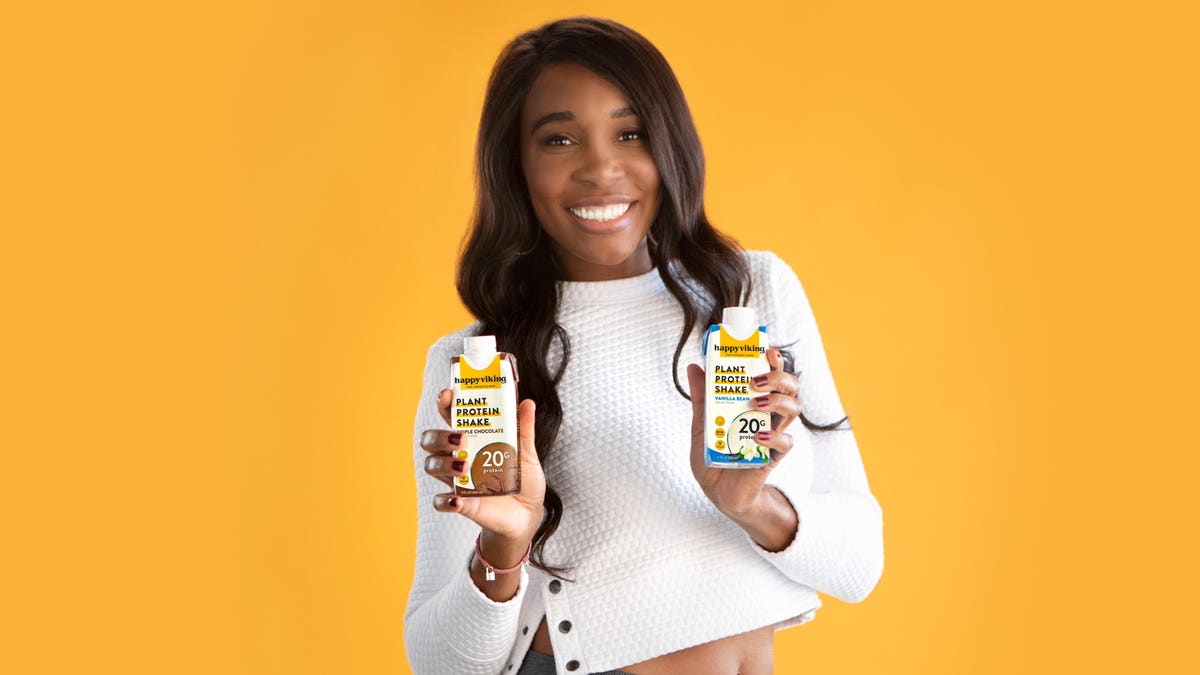 As awareness of the benefits of a plant-based diet continues to spread, more celebrities are using their platforms to share their feelings and experiences towards eating for the planet, for animals, and for their health.

This includes putting their name on and time into developing plant-based supplements, foods, and beauty products. Not all of the celebrities are strictly vegan; some embrace a flexitarian diet – the practice of eating mostly vegetarian foods – which is indicative of a wider trend.

Indeed, there is a rise of people are cutting back on animal products and incorporating plant-based foods into their lifestyle. Aided by alternative protein start-ups such as Beyond Meat and Impossible Foods, as well as legacy brands like Quorn and Gardein, Americans spent a whopping $5 billion on plant-based foods in 2019 – which is 29% more than in 2017 – and the category is expected to continue to grow.

But who are these celebrities, and what’s motivating them to enter an increasingly competitive market?

Actor Alicia Silverstone decided to create a line of plant-based supplements after becoming pregnant with her son, Bear, and realizing she might not be able to get all the nutrients she needed through her diet, no matter how nutritious it was.

“My midwife asked me to take a prenatal,” she says. “She convinced me that perhaps there were times when I couldn’t get my hands on the food I wanted, like when I was traveling.”

Silverstone tells me she wanted to have the peace of mind that she was getting every vitamin and mineral her body needed during pregnancy.

“I looked at all the best prenatals on the market, and not one of them was certified organic, non-GMO-verified, and food-based with no-chemicals. This was confusing — why was I going to take something that was less healthy than the food that I was eating?”

Silverstone thought that, if she had an untapped need, others might, too – so she decided to fill the gap in the market herself. She found a partner in vitamin and supplements retailer Garden of Life and created mykind Organics, determined to make supplements that were closer to whole foods.

“When you make something that’s food, the body can identify it and process it properly,” Silverstone says. “If you look at the label on the back of my products, you’ll find it might say broccoli, or lemon balm, or red pepper… I think that’s pretty unique, to read a label and see those ingredients instead of a bunch of words you don’t understand.”

Silverstone’s product launch took time as she developed an extraction method that didn’t use conventional GMO corn alcohol or other harsh chemicals.

The chews are certified organic, non-GMO verified, vegan, gluten-free, free of synthetic binders and fillers that are traceable from seed to shelf. And while she was inspired to create them during her pregnancy, Silverstone says the supplements are for anyone.

“It’s to help people be their best selves, look their best, feel their best, and also alleviate suffering at the same time,” she says, referring to the challenges facing the planet and animals in the era of factory farming.

Tennis champion Venus Williams co-founded Happy Viking, a range of plant-based yellow pea and brown rice protein shakes, also based on a personal experience. She wanted to offer people a healthy way to refuel and recover while also feeling satisfied.

“It’s all about working towards becoming the best version of yourself, and that starts on the inside,” says Williams, who has created the drinks in partnership with Dyla Brands. At the launch, the drinks sold out in under 24 hours and were the number one new release in protein drinks on Amazon, according to Williams.

The drinks, available in chocolate and vanilla flavors, are made from natural ingredients and each contain 20 grams of protein.

“These shakes help fuel my body and my mind and allow me to perform at the highest level. I’m really proud of the product we’ve created.”

The powders’ plant-based formula, which includes herbs, minerals, vitamins and a adaptogens (a growing category marketed as helping the body resist stressors, though there is little empirical data available to support this claim, at least so far) was formulated by herbalists and nutritionists over two years, and is free from synthetics, gluten, and sugar.

“Beauty really is an inside job,” Hudson says. “It’s not a silly thing to say, it’s a real thing to say. It’s what we put in our body and how we take care of ourselves that really, inevitably, is what creates a beautiful interior and then an exterior.”

By interior, Hudson doesn’t just mean our physical health: “I also look at that in terms of the brain—when we’re happy, when we feel optimistic, when we feel available and open, this is when we feel beautiful to ourselves,” she explains. “Food, and how we support our nutrition, is an enormous part of how our brain can be healthy.”

But achieving health goals can be challenging, something Hudson acknowledged. She tells me that many people will be able to relate to her relationship to food, which was a motivation to develop the powders.

“I want to be healthy, I strive to put the right things in my body, and I struggle to always be so regimented. So, if I have a platform to talk about these things, I want to be relatable and I want to create the products that are going to make people feel like their entrance into wellness is accessible to them, and not as daunting as some of these task-oriented 30-day cleanses.”

Hudson believes in a predominantly plant-based diet (INBLOOM is primarily vegan; only one of the products contains marine collagen, sourced from fish, as the name of the ingredient suggests), not just for our own health but for the planet’s, and she tries to incorporate that into her daily life. She says while there’s so much we still don’t know about the nutritional power of plants, it’s good to introduce people to the benefits of a plant-based foods and supplements in a fun way.

Away from the food and supplement aisles, actor Evanna Lynch decided to tackle the beauty industry with the launch of Kinder Beauty Box in 2018, a box containing vegan and cruelty-free beauty products delivered to customers every month, when she saw a gap in the market.

“While a lot of people struggle to be vegan, it seems there’s a unanimous opinion that animal testing is wrong; it’s an archaic practice,” she says.

However, Lynch realized these values weren’t being reflected on the shelves, and recognized that the beauty industry needed to catch up.

“The food industry has made it easier to be vegan, whereas the beauty industry is still so far behind,” she explains. “If you go into your average drugstore and forget something like toothpaste or shampoo, you’re not going to find a cruelty-free option on the shelves most of the time, unless you do a lot of research.”

“I was seeing a discrepancy between what people wanted and their values, and what they were able to do,” Lynch adds.

Lynch realized that making vegan and cruelty-free vegan beauty products as accessible as plant-based food, and making those designations clear on packaging, would help more people to incorporate these value-aligned products into their lives.

Every product Kinder Beauty Box works with must be cruelty-free (not tested on animals) and vegan (doesn’t contain any animal products). But figuring out which products fit the criteria, Lynch says, wasn’t easy in the beginning.

In fact, she says, she felt like she had to become a scientist to understand some ingredients, such as carmine (crushed beetles), lanolin (sheep’s wool), and honey, which can come under various names.

“I think it’s very misleading labeling, when it says it’s vegan but it’s not from a cruelty-free company,” she says.

For celebrities starting businesses in the plant-based industry, shaping the products with their own values is an important part of the process.

Silverstone adopted a plant-based diet over 20 years ago, motivated by the human impact on the people, planet and animals, and saw her health improve.

“Vegan is crucial for me,” she says. “It’s a no brainer. I wouldn’t purchase anything that’s not vegan, no matter what.”

Williams adopted a plant-based diet when she was diagnosed with the autoimmune disease Sjogren’s syndrome. As she explained in Fast Company, after her diagnosis, she couldn’t play. She wanted to find a way to manage her symptoms, which can include fatigue, and began learning more about the connection between nutrition and health.

“I live a very active life and had to make sure I was still getting all the nutrients I needed, so I started experimenting with protein shakes and found a formula that tasted great and was effective,” Williams says. “I learned a lot about the food system and how it affects our bodies and minds, and ultimately, our health. There’s just something about when you eat healthy food, it makes you feel proud and like you’re doing the right thing. It makes you feel happy.”

Lynch, who also launched the vegan podcast ChickPeeps in 2017, is happy to see the influx of plant-based products on shelves in recent years – and thanks social media for playing a part in this.

“I think a lot of it has to do with social media that marginalized groups are having their voices heard,” she says. “It used to be such a niche movement and really sidelined, but I think social media has brought to light that these are causes we cannot not care about.”

“It’s great that influencers are being held accountable and are trying to put out products that will benefit everyone,” she adds.

Celebrities have always wielded influence over the rest of us – from what we wear and what we buy; even our haircuts (anyone remember “The Rachel?”). But the army of celebrities encouraging us to adopt more plant-based foods, supplements, and beauty products into our lives isn’t about endorsing trends – it’s founded in authenticity and genuine beliefs.

From powders to shakes to beauty boxes to supplements – the rise of celebrities founding plant-forward companies is a positive step towards wider adoption of plant-based values, and shows that this is a trend that’s here for good.

Actress Kate Walsh Is Taking Governments To Task For Their Role In Marine Degradation
Cold War warning sirens are sounding across France. Here’s why
Could your flight be cancelled? Check the dates of summer strikes and disruption
Where to watch 4th of July fireworks in Hawaii 2022
The Delevingne Sisters On Prosecco, Pandemics And Pink Drinks