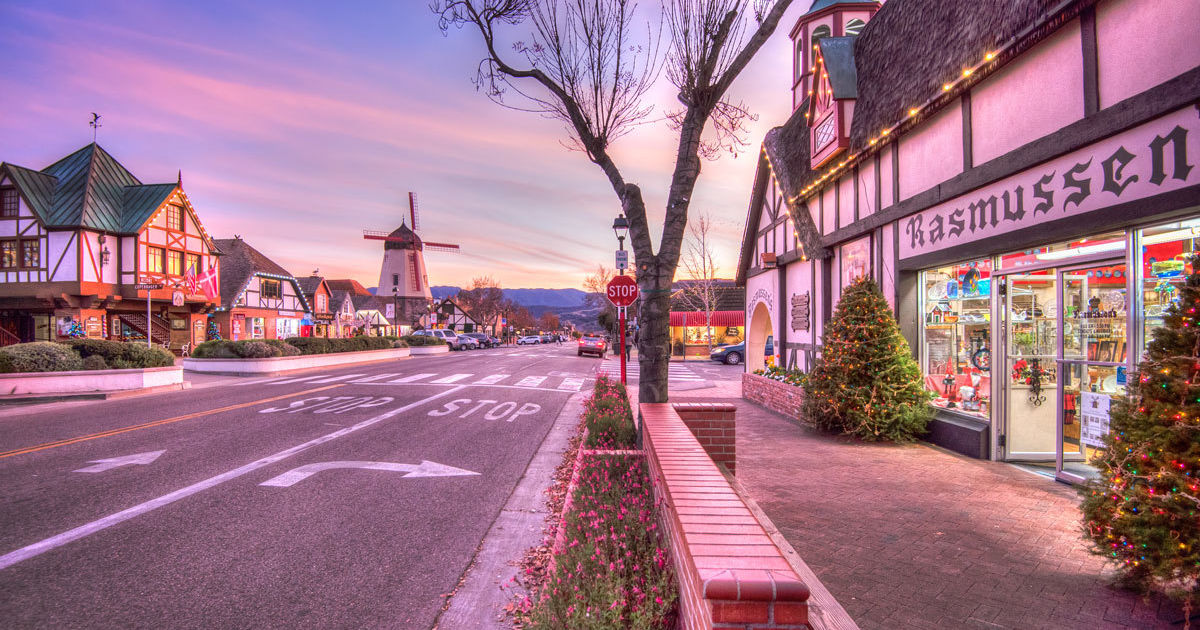 Here are locations across the U.S. that make you feel like you’ve set foot in a European destination with no passport required.

With much of Europe off limits amid the current pandemic, Americans will have to wait longer to travel to and throughout the continent. However, they can find resemblances to some European countries a little closer to home. Here are locations across the U.S. that make you feel like you’ve set foot in a European destination with no passport required.

More than one in 10 residents in this Gulf Coast city claim Greek ancestry, with Greek immigrants arriving in the late 19th century. They also gave Tarpon Springs the moniker, “The Sponge Capital of the World,” in that divers would apply the Greek Islands tradition of diving for sponges to Floridian waters. Nowadays, Greek heritage can be seen with locals in coffee shops along Athens Street. Along Dodecanese Boulevard, shop at Getaguru Handmade Soap Company and dine at Mykonos and Hellas Greek Restaurant.

Founded in the mid-19th century, this city on the shores of Lake Michigan makes you feel like you’ve set foot in the Netherlands. Experience a Dutch wonderland at the Windmill Island Gardens, with a windmill that grinds West Michigan sourced wheat into flour, while Nelis’ Dutch Village shows the traditional making of wooden shoes. Every May, take in its Tulip Time Festival; later on in the year, do your holiday shopping at Kerstmarkt.

Another Dutch destination, this Iowa location is all heritage museums, Dutch architecture, and the Vermeer Windmill, the tallest working grain windmill in the U.S. Then there’s Klokkenspel, a carillon clock going off on odd hours and with historic figurines coming in and out. And cuisine options are plenty, from Dutch bakeries’ Jaarsma Bakery and Vander Ploeg Bakery to Dutch Fix, serving up Dutch street food.

Referred to as the “Danish capital of America,” this village in Santa Ynez Valley gets quite festive with its Solvang Julefest, a holiday event; Solvang Grape Stomp, a wine harvesting celebration; and Solvang Danish Days, a full-blown heritage festival. Regularly, you can see a copy of Denmark’s famous Little Mermaid sculpture and Elverhøj Museum of History & Art, whose exterior resembles an 18th-century Danish farmhouse. But be sure to try Danish pastries at bakeries including Aebleskiver Café and Birkholm’s Bakery & Cafe.

As the nation’s oldest city, this former Spanish settlement is still noted through Colonial-style architecture and historic venues. Avile Street is the oldest street in the U.S. and is now an arts district with galleries and restaurants and historic venues. The Castillo de San Marcos National Monument, an old Spanish fortification built to protect their claim on the Atlantic trade route, is now overseen by the National Park Service.

Nicknamed “Little Poland,” this Hartford County city’s section of Broad Street continues the legacy built by Polish immigrants coming to work in factories over two centuries ago. It’s known for its annual Little Poland Festival, which holds cultural and family-friendly activities. Do some shopping in Polmart, a store with all things Polish, or for pierogis and stuffed cabbage at Roly Poly Bakery. Or order a meal at the highly recommended Staropolska Restaurant.

With the most concentrated population of Basques living in the U.S., the “Basque Block” is a downtown section along Grove Street reflecting this legacy dating back two centuries. The Basque Museum and Cultural Center tells the history behind these emigrants from this northern Spain. The Basque Market carries Txakoli, Basque and Spanish wines and is known for weekly preparing giant paellas on the street. Go pintxo hopping at Txikiteo and Bar Gernika Basque Pub and Eatery.

Referred to as “America’s Little Switzerland,” this Wisconsin village showcases its Alpine-style architecture and a Cow Parade of statues depicting these dairy-producing animals. Established in 1845 by Swiss immigrants, New Glarus holds a Harvest Fest in October, where daily routines and responsibilities of the past – cheese making, blacksmithing, yarn spinning, you name it – are re-created. And at Emmi Roth Käse Cheese Factory, a Swiss-owned cheesemaker, take a self-guided tour.

Prince Carl of Solms-Braunfels arrived in what’s now the Texas Hill Country to motivate the founding of this 19th-century German colony. His royal presence lives on in murals depicting him and other key figures in The New Braunfels Historic Outdoor Art Museum. Head to Krause’s Cafe for its Biergarten and German fare, and the Gruene Historic District is where German farmers lived but now has a hopping’ dance hall, general store, and restaurant. Every November, Wurstfest serves up a German food-focused celebration.

In the 1960s, officials decided to make this Deadwood-looking town into a Bavarian village to attract visitors. Today, its architecture is full of beamed houses with other German features ranging from restaurants (try the Bavarian Bistro and Bar) to German named gift shops (with European ornaments at Kris Kringl).

This Georgia town is tucked into the Blue Ridge mountains, and has been designed to look and feel like an Alpine village in Bavaria. You’ll spend the day visiting charming shops and walking on cobblestone streets. Roadtrippers will enjoy having access to the Russell-Brasstown Scenic Byway that highlights the beauty of the Blue Ridge and starts in Helen.

Known as “Little Sweden, USA,” this city in Kansas’s Smoky Valley was settled by Swedish immigrants in the 1860s and Lindsborg still celebrates its Scandinavian roots through Swedish traditions year-round. Their event calendar includes St. Lucia Festival in December; Våffeldagen, which celebrates Swedish waffles in March; and Svensk Hyllningsfest, a biennial celebration. Spot sculptures of the Swedish Dala Horse around town and purchase a hand painted one from Hemslöjd.

Giving a Tuscan landscape vibe, this wine-producing destination boasts wineries whose architectural features make you feel like you’re in Italy or another similar European countryside. To start, the Castello di Amorosa gives off the feeling of exploring a hill town in Tuscany or Umbria, with its 13th-century-style winery. Napa Valley is also noted for producing another associated Italian export — oil olive — and sample the bounty produced at Napa Valley Olive Oil Manufacturing Company.

While bounced between the Spanish and influenced by indigenous peoples and African Americans, New Orleans was first founded and settled by the French. Their imprint lingers within nearby Cajun country, with those speaking “Louisiana French,” and in NOLA’s French Quarter, the city’s most famous neighborhood. Here, dine on fine French and Creole cuisine at Arnaud’s, Galatoire’s, and Antoine’s Restaurant.

Founded by Scottish merchants in 1749, this city outside of Washington, D.C. gives off a Colonial English vibe within its Old Town District. Captain’s Row is a cobblestone streetscape, while the brick-lined King Street has many shopping ops. The Old Town Farmers’ Market has been in existence since before the American Revolution; George Washington sent produce grown at nearby Mount Vernon to be sold there.