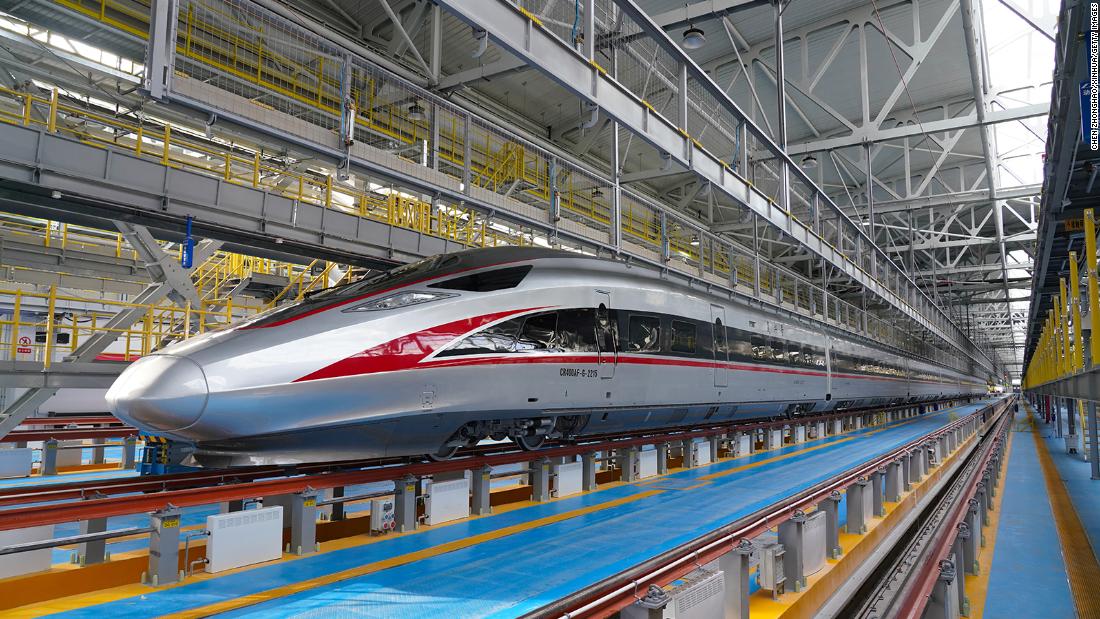 The CR400AF-G train, which can operate at speeds of up to 350 kilometers per hour (217 mph) in temperatures as low as -40 degrees Celsius (-40 degrees Fahrenheit), is part of the Fuxing series of high-speed electric multiple-unit (EMU) trains developed and operated by the state-owned China State Railway Group.

The train, rolled out in Beijing on January 6, will run on a new high-speed line connecting the Chinese capital with northeastern destinations including cities Shenyang and Harbin — the latter of which is famed for its annual snow and ice festival.

Officials have yet to announce when the train will begin operations.

In a post on Chinese social media site WeChat, the China Railway Beijing Group — part of the China State Railway Group Company — ran through several of the train’s optimized components that aid its ability to withstand cold temperatures.

These include: bolts made with chromium-molybdenum alloy — a material that endures extremely low temperatures; silicone sealing strips, which prevent snow and ice from getting into the train body; temperature-resistant brake control devices; and stainless-steel pipes equipped with heating devices.

In a report by state-owned newspaper China Daily, Zhou Song, director of the China Railway Beijing Group’s bullet train center, offered an analogy to explain the new train’s brake system: “If the train stops in Harbin (one of China’s coldest cities in northernmost Heilongjiang) for an hour, because of the extremely cold weather, the braking system can easily freeze if it stops moving for a while. The new system will enable the brakes to move from time to time even if the train stops, like a person who stamps his feet to keep warm in cold weather.”

China isn’t alone in having to adapt its bullet trains to extreme conditions.

In 2020, Japan launched its latest record-breaking bullet train and doesn’t only run faster and smoother — it’s also able to transport passengers to safety in the event of an earthquake.

The train has an upgraded automatic control and braking system that allows it to halt faster in case of an emergency and is fitted with a lithium-ion battery self-propulsion system — the first of its kind in the world.

This system allows the train to run for a short distance on its own during a power outage and will make it possible for it to move to a safer location at low speed if stranded in a high-risk area — on a bridge or in a tunnel, for example — during an earthquake.

It entered into service July 1 and serves the Tokaido Shinkansen line, which links Tokyo Station and Shin-Osaka Station in Osaka.

Today, China is home to the world’s largest high-speed rail network, which stretches over 37,000 kilometers, and the fastest commercially operating train — the Shanghai maglev.

Running at the top speed of 431 kph, the train links Shanghai Pudong Airport and Longyang Road in the eastern side of Shanghai.

The train running on that line is also part of China’s Fuxing series and can run up to 350 kilometers per hour (217 mph) without a driver — said to be a world first.