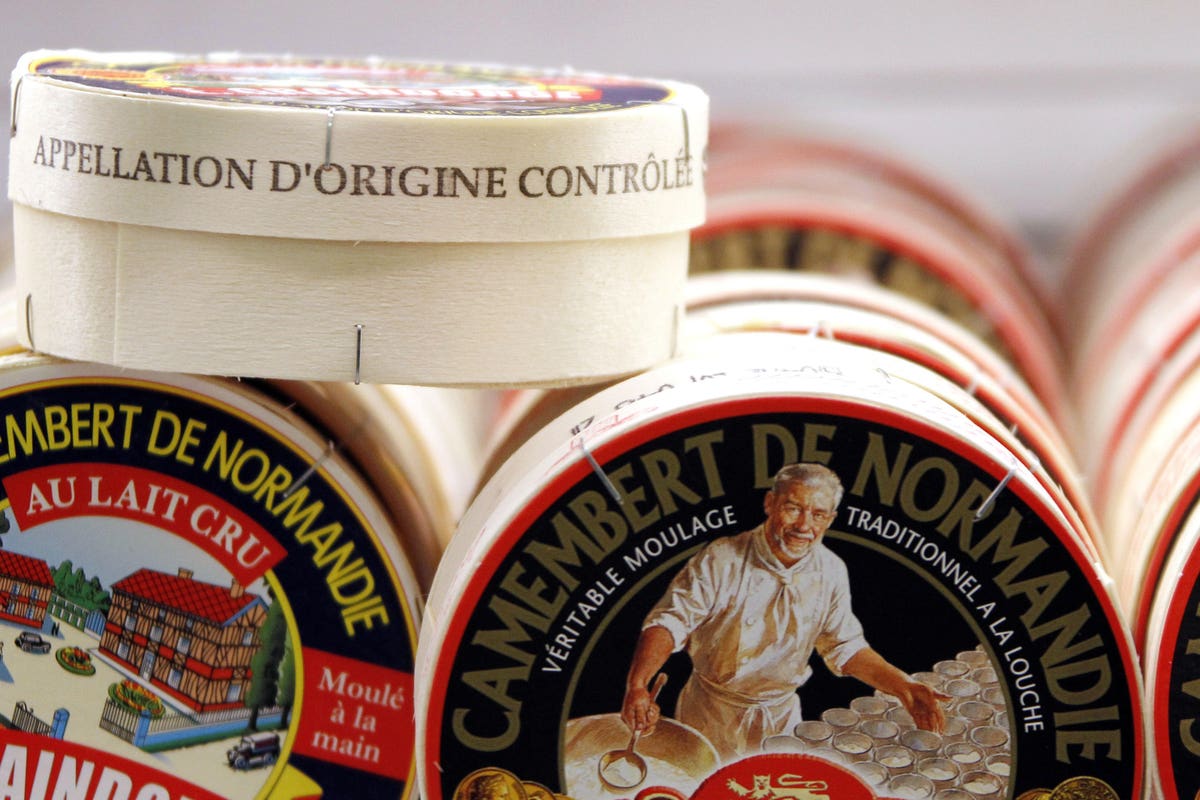 Camembert traditionally comes from Normandy, in the north of France, and for the past twenty years there has been a war waging between small producers and large, industrial manufacturers over how they can market their cheeses.

On the one side are small producers using local cows and raw milk. On the other are large industrialists, who can use any cows and pasteurised milk. Both want to say their cheese is made in the region. The argument is this: how local does the produce need to be to win the right to label a camembert, an actual camembert?

Camembert can be made under the prestigious AOP label–appellation d’origine protegée, a protected designation of origin. Products made under an AOP in Europe, have to conform to specific guidelines–notably, the products have to be sourced in the same region as where the product is made and matured. Other examples are champagne, gorgonzola,  parmigiano-reggiano and before Brexit, Melton Mowbray pork pies in the U.K.

For years, small producers who conformed to the AOP guidelines sold AOP-labelled camembert, but gradually sales have been eaten up by larger factory-produced camembert, which advertises itself under a ‘made in Normandy’ label (fabriqué en Normandy).

This ‘made in’ Normandy camembert is made from pasteurised milk from any cow breed, raised anywhere and accounts for most of the camembert found in supermarkets across Europe and the U.K. As a comparison, about 60,000 tonnes of this type of Camembert are produced each year, as reported by The Guardian.

AOP producers had repeatedly asked the French government and food agencies to stop the large camembert producers from being able to label these cheeses as ‘made in’ Normandy.

In 2018, both sides reached an agreement where producers of both types of Camembert would share the AOP in a compromise–industrial producers agreed to use only milk from herds that contained at least 30% cows from Normandy from 2021.

The move was seen as representative of the increased fear around using raw milk in food products–consumption has been falling year-on-year of unpasteurised cheeses across France.

However, from January 2021, industrial manufacturers no longer have the right to label their camembert, ‘fabriqué en’ Normandy. The General Directorate for Competition, Consumer Affairs and Fraud Control (DGCCRF) sided with small producers, claiming that the ‘made in’ label erroneously suggests to consumers that the cheese is indeed made with local ingredients, as reported by Les Echos. The food agency said that a product cannot be labelled as ‘made in’ Normandy if it doesn’t comply with the AOP rules of production. It’s a victory for the small cheese farmers.

Gérald Andriot, director of operations at the Isigny Sainte-Mèr dairy cooperative sells under both labels, the AOP and the ‘made in’ Normandy. He doesn’t agree with the ruling but will comply. “It’s holding the word Normandy to ransom,” he told Les Echos.

Many believe the ruling has come about because the government couldn’t find a compromise between the large firms and the small producers. So whilst it is becoming more difficult to find a ‘made in Normandy’ camembert cheese on the shelves, the industrialists will fight on.