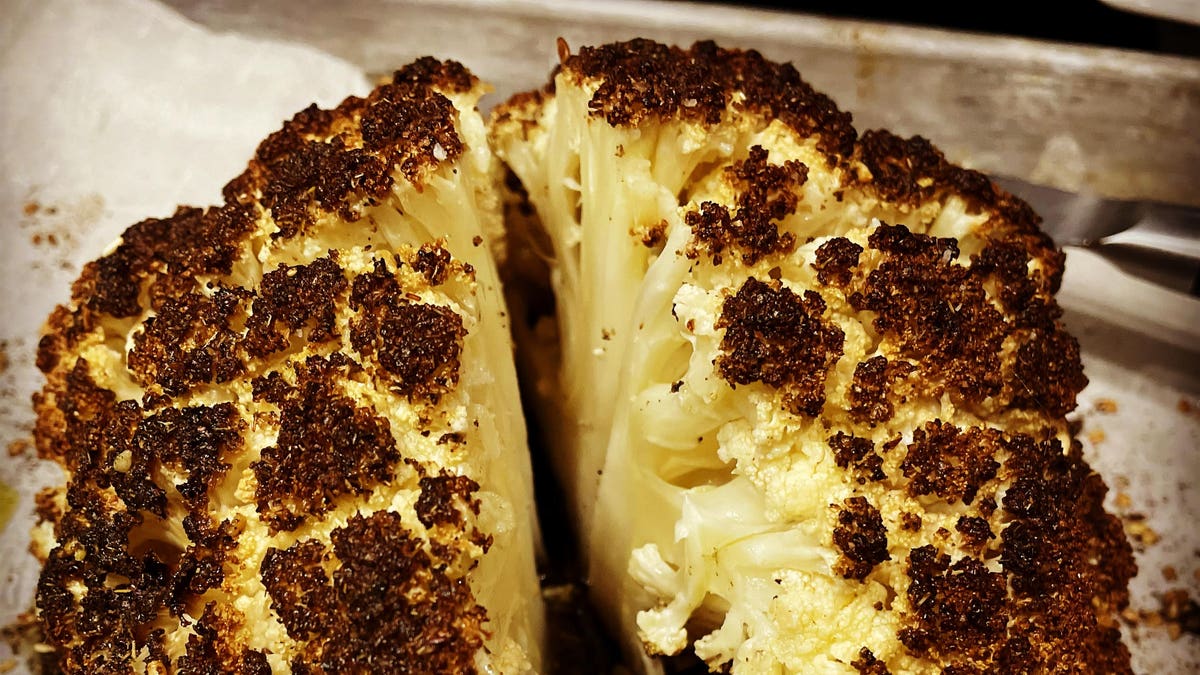 Cauliflower is more than having a moment!  It has not only left the uneaten crudité trays of its past, but it is a star ingredient being made into rice, pizza crusts, crackers and more.

Even better, when sliced like a steak, or roasted whole, it is the center of the plate.

I have been roasting and grilling cauliflower for much of my adult life.  I discovered early in my grill experiments that cruciferous vegetables like cauliflower, cabbage, broccoli and Brussels sprouts are transformed by the grill, or any high dry heat.  My first experiment was barbecuing a whole head of cabbage, basting it in butter and barbecue spices until the leaves were silky and tender and you could pluck them like the leaves of an artichoke.  This is still my favorite way to eat cabbage.

Next, I coated florets of cauliflower and broccoli with olive oil and salt and grilled or roasted them until they were golden brown and caramelized and so good, you could eat them like popcorn.  That preparation has been a staple in my house ever since, and one of the best ways I know to eat veggies.

A few years ago, I—like so many other adventuresome home cooks and chefs—started cooking cauliflower steaks.  First, when I was writing my cookbook, Steak and Cake as a “steak” substitute for my vegetarian friends, and finally because it tasted so good and was relatively healthy. But, it wasn’t until this pandemic that I finally tackled roasting the whole cauliflower.

I had resisted it because those I respected in the food world told me that you have to par-boil it.  And, if there is one thing that I can’t stand, it is par-boiling and then roasting.  It’s not logical, because I love cooking all matter of meat by sous vide and then searing it on the grill—my version of reverse sear.  But for some reason, I take a hard-pass on any recipe, especially vegetables, that require a boil and a bake.  In the case of whole roasted cauliflower, I decided that I would work on creating a “work around.”

At first, I trimmed the leaves, coated the whole cauliflower in olive oil and salt and pepper and let it roast for nearly three hours.  It was good, but it was very crispy and a bit tough and dried out.  But it peaked the interest of my sister, Mary Pat, and she asked me what I did.  I relayed my process and since she didn’t have three hours to get dinner on for her family, she removed the stems from the heads of two small cauliflower, oiled and seasoned them, and set them to roast.  She reported that her heads of cauliflower were perfectly cooked through in an hour and a half—about half the time that my cauliflower took.

The next time that I roasted a whole head of cauliflower, I trimmed the leaves from the bottom and carefully removed the stem leaving the head intact.  You have to be careful that you don’t cut any florets off when you are doing this.  I then coated the whole head both the top and bottom with olive oil and seasoned it liberally with Lebanese za’atar and kosher salt. I placed the whole head on a parchment-lined quarter sheet pan and roasted it for 1.5 hours in a 375°F oven.

The result was whole roasted cauliflower perfection without having to par-boil it.  The outside was deliciously crusted with the flavors of za’atar and roasted caramelized cauliflower.  For fun, and out of curiosity, I decided to temp the head. It’s not common to test vegetables for doneness using a thermometer, but I wondered if it would temp like meat.  I slipped the instant-read thermometer into the thickest part of the center and I could tell it was tender by the way it felt. It temped and felt much like a well-cooked pork butt, from 195°F -205°F, depending on the position of the thermometer.

I cut it into four equal portions and the knife went through the center like butter. No toughness, nothing dried out.  The removal of the stem allowed for more air to circulate through the center of the whole cauliflower and resulted in picture perfect cooking.  You may not need a step-by-step recipe to make this if you read my process above, but so many people have asked me for a recipe that I included it below.

Za’atar is also having a moment and is the perfect seasoning for roasted cauliflower. It is generally a dried spice mixture of oregano, thyme, sumac, sesame seeds and based on the region, other herbs and sometimes salt. It is easily found in any middle-eastern food store, online and even in some traditional grocery stores. Find your favorite version and you’ll find yourself using it on everything.  My favorite version is a no-salt Lebanese version that is heavy on the sesame seeds which I love because it give a toasty nutty flavor to everything you sprinkle it on.

Rinse the cauliflower and carefully trim the leaves from the bottom using a sharp paring knife.  Once the leaves are trimmed, make small cuts around the diameter of the stem and pull the stem out. You want to be careful not to cut any florets out, but you effectively want a hole underneath that the heat can travel through.

Place the cauliflower [stem-side down] on a parchment-paper lined sheet pan.  I use a quarter sheet pan that measures about 9 x 13 inches.  Rub cauliflower all over with olive oil.  You will need to use your hands to make sure all the exterior surfaces are oiled.  This will help prevent the cauliflower from drying out.

Season liberally with za’atar.  Sprinkle with salt.  Alternatively, you can mix the za’atar and salt together and season the whole cauliflower once.

Place the sheet pan in the oven and let roast 1.5 hours.  At this point, an instant-read thermometer should go into the center of the cauliflower easily and the temperature reading should be between 195°F -205°F.  If you don’t have an instant-read thermometer, use a small knife and insert it into the thickest part of the cauliflower.  It should feel like slicing through soft butter.

Remove the pan from the oven and drizzle lightly with olive oil and a small pinch of flaky sea salt.  Cut cauliflower into quarters and serve. It is delicious served alone but is also good with both Labneh and Tahini sauce.