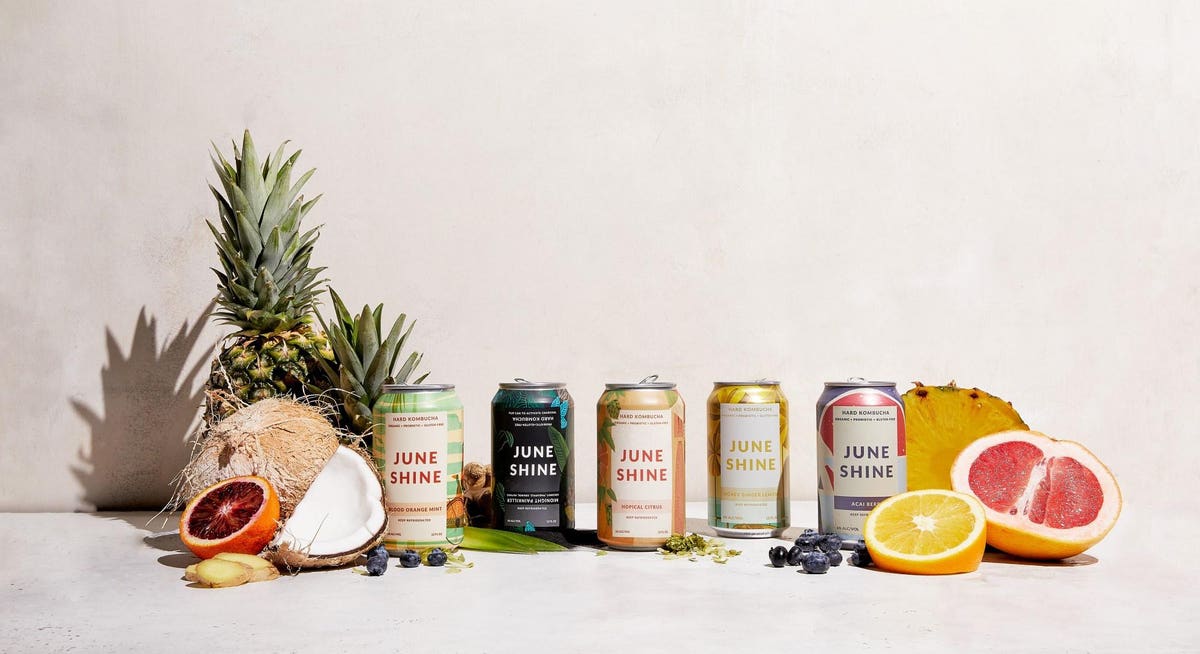 JuneShine, one of the leading brands of the burgeoning hard kombucha craze, has wrapped up a Series A funding round, securing investments from a host of star names including Diplo, comedian Whitney Cummings and US Women’s National Team members Ashlyn Harris and Ali Krieger. Existing investors Peter Rahal, Litani Ventures and Amberstone Ventures also funded this round.

Following a seed round valued at $5 million in 2019, this round of funding, valued in the mid-millions, will facilitate the JuneShine’s expansion into new markets across the country and increase partnerships with key retailers, including Costco, Kroger
, Target
, Whole Foods
and Trader Joe’s. JuneShine is present in 32 states wholesale, 44 states via direct-to-consumer, and via a recently-opened branded tasting room in Santa Monica.

With the category’s boom, investors are circling. JuneShine’s investment round follows an incredibly successful B Series run by competitor Flying Ember last August. The brand closed $10-million of new funding, bringing the company’s Series B total raised to $35 million.

Positioning itself as a ‘spirited functional drink,’ JuneShine was founded in San Diego just three years by two Forbes 30 Under 30 2020 members. The brand of booze-spiked fermented tea packed in Instagram-ready cans quickly won favor with health-minded drinkers—JuneShine tripled revenue between 2019 and 2020.

The series A funding will fuel “growth marketing and capital expenditures to accelerate our nationwide expansion and help us expand our production capacity as we are on track to double our volume from 2020 to 2021,” explains brand co-founder Forrest Dein. “These investments will in turn help expand category growth as a whole.”

Dein points out that many of the noteworthy investors are organic fans of the brand. “Some had already posted photos of the can on social media before we reached out,” says Dein.

“I truly just saw a bottle of JuneShine—the Rose, specifically—at the store one day. It grabbed my eye because it seemed so chic and fresh,” describes comedian Whitney Cummings. “I didn’t even know what it was, I just wanted it in my fridge. It was serendipitous that it turned out to be hard kombucha—it provided the perfect chill buzz that made my brain a fun place to be instead of a haunted house.”

“I have always been into kombucha and I’m always looking for alternative beverages,” continued Diplo email. “I can’t remember where I was when I had JuneShine for the first time but I remember being intrigued because I thought the concept of a hard kombucha was perfect for someone with my lifestyle.”

Kombucha, a bubbly, probiotic-packed fermented tea, has been an ever-trendy product on the wellness scene. It’s sparkling, tangy, and slightly tart; think of a hybrid of sour beer, sparkling cider, and seltzer.

While kombucha was a relatively niche product until say, 2019, the health beverage is veering into the drinks world thanks to prevailing trends towards holistic health in the beverage alcohol. Broadly speaking, hard kombucha offers many appealing functional benefits: it’s low-sugar, low-carb, and offers the health benefits of green and black tea (though note, the probiotic benefits of non-alcoholic kombucha are not as present in boozed-up booch).

As the hard kombucha segment continues to peel drinkers away from their craft brews and hard seltzers—at 6% ABV, JuneShine competes quite squarely with ciders, craft beers and RTDs—investments like these will continue to fuel the category’s rapid growth.

“I think all young people nowadays are looking towards healthy alternatives when it comes to alcohol. They want something that tastes good too,” continued Diplo. “After the hype there was around hard seltzers, I think hard kombucha is next. This is great because I think hard kombuchas so much better!”

“We believe hard kombucha can be bigger than the cider category but smaller than hard seltzer,” continues Dein. “There’s a huge opportunity in the on-premise sector as the world opens up. We will see customers discovering hard kombucha in bars and restaurants where hard seltzer hasn’t quite hit its stride.”

Continuing kombucha’s mindful ethos, the brand will use part of the investment to implement sustainability initiatives across the production process. JuneShine expects to be 100% carbon neutral by end of year.

These ecoconscious sensibilities are a big draw for green drinkers—the hard kombucha category is almost 5% the size of the craft beer segment in Southern California.

“The category growth will move West to East over the next two years,” says Dein, “though key metro markets in the northeast (like New York) are already ahead of the curve. As hard seltzer fatigue begins to take hold, drinkers will trade up from hard seltzer to hard kombucha and premium ready-to-drink cocktails.”

Hard kombucha has experienced impressive growth for a relatively young category. “When we started in early 2018 it was just Boochcraft who owned the category and Flying Embers was just coming out,” says Dein. Now, there’s a full rainbow of hard kombucha brands offering a wide variety of flavors and tea innovations. “Plus you have iconic craft breweries like Sierra Nevada and Odell putting serious focus and investment behind their new hard kombucha lines which are further building the category in our key accounts.”

White Claw, watch your back.