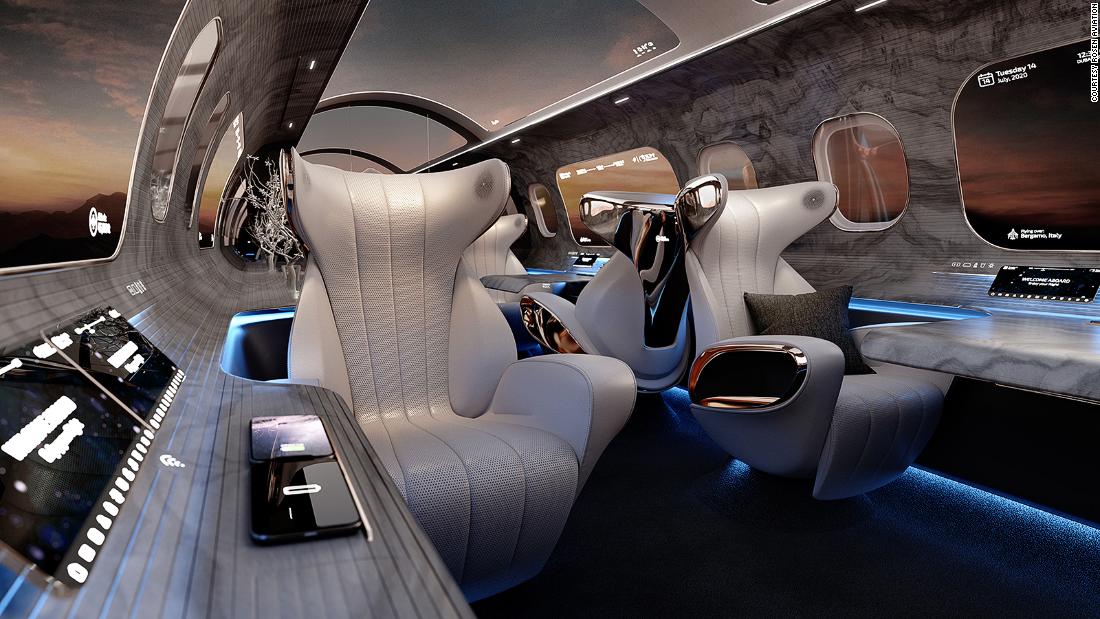 (CNN) — Looking out the cabin window and seeing cities and oceans from above is, for many of us, one of the joys of flying.

But aviation innovators Rosen Aviation reckon this experience could be taken to the next level, rendering actual airplane windows obsolete.

The American aviation company is touting its Maverick Project airplane cabin design as the next frontier of inflight experience. A key part of the package? Virtual windows.

Clark tells CNN Travel that while some of these features have become more common on the ground in recent years — think smart homes — airplane cabins haven’t really caught up.

“The Maverick Project originated because the industry at large is somewhat lagging behind the domestic, residential and automotive worlds,” he says.

Rosen, working in collaboration with KiPcreating and Sky-Style, wants to change this dynamic with the Maverick Project.

But while the visual renderings look flashy, Clark says the goal isn’t to go high tech simply for the sake of it.

“The critical piece is it’s about the passenger experience, it’s not about the technology,” says Clark.

“One of the elements that is most critical for Rosen is the integration of technology seamlessly, that it’s almost invisible technology.”

Rosen envisages the Maverick Project working in a private jet, but the company also plans to exhibit a commercial version at next year’s Airport Interiors Expo, an annual industry event highlighting innovation in cabin design.

“It completely fits into business, first class — and I think some of those technologies can even trickle down to the coach environment,” says Clark.

Rosen’s Maverick Project has made waves in the aviation world — not long after the design premiered in 2020 it was nominated for an International Yacht & Aviation Award, and was also on the Judges’ Choice shortlist at this year’s Crystal Cabin Awards.

“It seems the virtual skylights and virtual windows are among the hottest of topics because they bring in that ability to incorporate augmented reality, some artificial intelligence, and they transform that little porthole window we’ve been living with for decades into something more immersive,” says Clark.

The idea is a virtual window could depict the world outside the airplane via an OLED screen overlaid with detail. If the airplane is flying over a mountain range, for example, the screen will flash up with information on the landmark.

The result is the windows are less structural concepts, and more part of the inflight entertainment (IFE).

The Maverick Project is designed to suit a private jet space, but a commercial airplane offering is said to be coming soon.

Rosen recently completed a research project in partnership with the University of Colorado and Textron Aviation, examining people’s response to virtual windows. Clark says he’s not at liberty to disclose too much about the study’s findings, but that the response among subjects was overwhelmingly positive.

Clark adds there are other advantages to revolutionizing cabin windows.

“From an engineering perspective, virtual windows bring many, many benefits from structural integrity, to lightweight to aerodynamics.”

But Clark emphasizes that the main aim of the Maverick Project’s window design is to enhance the journey for travelers.

Rosen’s Maverick Project also uses touchless technology — in the wake of Covid-19, more appealing than ever.

“This was all developed and created well before Covid ever came along,” says Clark. “It was just a natural and intuitive way to control things — and it just happens to have the benefit that it’s touchless and hygienic.”

But while the Maverick Project has attracted accolades and attention, the fact that the aviation world, as Clark puts it “lags significantly” behind technology on the ground, could pose a problem.

“This not only adds to timelines and budgets, but also leads suppliers and manufacturers to operate very conservatively,” says Clark, “It’s really no fault of their own, but does have less than ideal consequences.”

Clark suggests “integrated partnerships” could be one way to circumvent this potential roadblock.

Still, Clark says Rosen is also working “with a global leading major airline” on “how we elevate their IFE provision.”

While details of this collaboration are still under wraps, perhaps some modified aspects of the Maverick Project could become a reality on planes before long.

Diwali 2021: When and how to celebrate the festival of lights in the UK
Saudi Arabia to launch enormous oil themed ‘extreme park’
How to get a day two lateral flow test
Celebrating the tastes of Chinese American bakeries
Southwest drops plan to put unvaccinated staff on unpaid leave starting in December