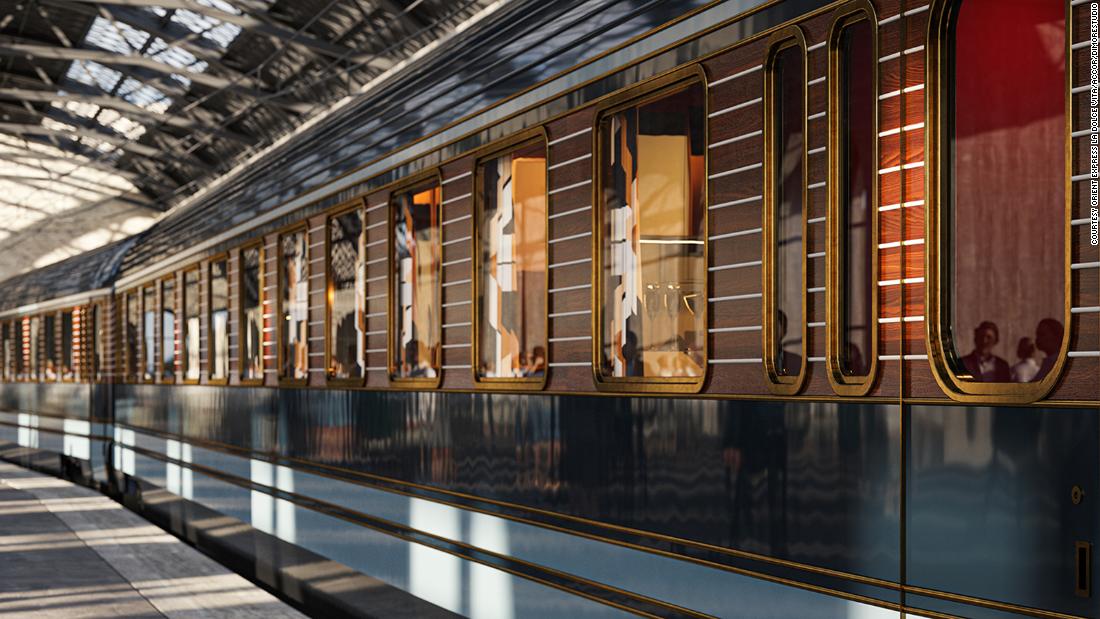 (CNN) — The launch of the new Orient Express La Dolce Vita might still be a while off, but it seems as though the highly anticipated service will definitely be worth the wait.

Renderings of the 11-carriage train, which pays homage to the “La Dolce Vita” period of the 1960s, have been unveiled, revealing a plush interior that looks more like a boutique hotel than a railway car.

Orient Express La Dolce Vita is to be made up of six trains, each featuring 12 “deluxe cabins,” 18 suites, an “Honour Suite” and a restaurant carriage offering a “five-star dining experience” including “award-winning Italian wines and exclusive haute cuisine.”

Each of the trains will travel across 14 regions and 131 cities around Italy, as well as from Rome to Paris, Istanbul and the Croatian port of Split, with trips lasting between one and three nights, when it begins welcoming passengers in 2023.

A rendering of the new Orient Express La Dolce Vita, which will debut in 2023.

The routes are to cover around 16,000 kilometers of railway line from north to south, including a journey from Venice to Trieste, along the Dalmatian coast to Split, along with rides through Tuscany’s hills and around Sicily.

Those who stop over in Rome will get to spend the night at the very first Orient Express Hotel, Minerva, based in a 17th-century Baroque palace at Piazza di Minerva, once it opens its doors in 2024.

A joint project between Trenitalia, part of Italy’s state railway company Ferrovie dello Stato, and Arsenale S.p.A., which specializes in luxury hospitality, the experience is presented as an “environmentally friendly way to experience the beauty of Italy.”

“La Dolce Vita train will accelerate luxury rail tourism and will appeal to many passengers as a safe and eco-sustainable way of moving that protects the environment and allows them to rediscover the most fascinating places in our regions.”

Designed by architectural and design studio Dimorestudio, the decor of the train skilfully combines the golden age of Italian design with a more modern feel. There are colorful carpets, huge windows and contemporary artworks.

Rome Termini station will serve as the center for each of the routes, providing a dedicated Orient Express executive lounge where guests “will enjoy a warm welcome and refreshments while awaiting their journeys.”

“These trains offer a new vision of luxury travel that is beyond our imagination,” says Sebastien Bazin, chairman and CEO of Accor.

The luxury service is set to travel across 14 regions and 131 cities around Italy.

“Our association with Arsenale Group has opened up new horizons in perfect harmony with the heritage and philosophy of Orient Express, and marks our constant desire to keep moving forward.

Unsurprisingly, a stay on the Orient Express La Dolce Vita will come with a hefty price tag, with trips averaging out to around €2,000 (around $2,255) per person per night.

Chef Carlo Cracco was on hand to cater for those on board, supplying a taste of what guests will experience on the upcoming service.

The luxurious train has been in service since 1982, traveling throughout Europe from March to November as well as Istanbul once a year.