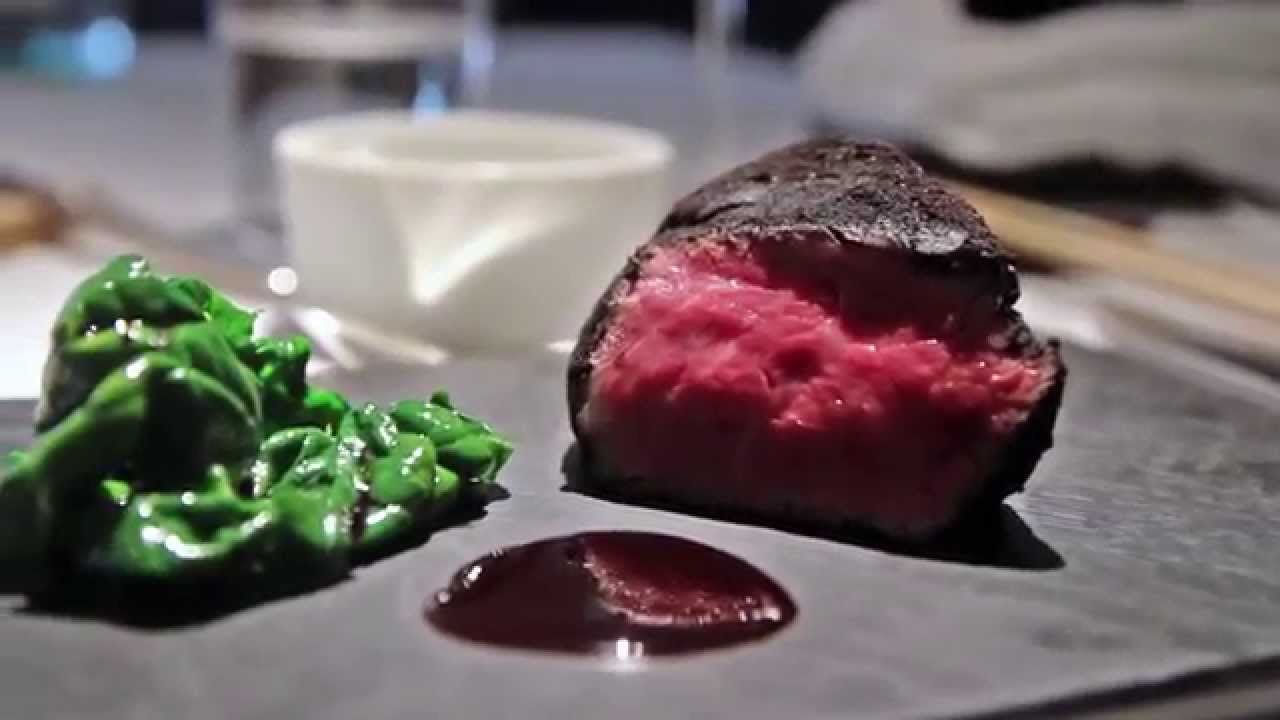 Yoshihiro Narisawa is the head chef and owner of Narisawa, one of Asia’s best restaurants and a two Michelin star restaurant in Tokyo. His personal philosophy of cooking and serving food is strongly related to nature and the world we live in. He derives much of his inspiration from nature and natural landscapes, and he changes his menu and his creations according the seasons of Japan. We had the Winter Collection 2014 menu, and beginning from the very course of our meal, I could clearly see the chef’s passion and his love for both food and respect of nature.

We began our meal with a dish called, Evolve with the Forest, which literally looked like a small forest on my plate, and it was even served on a slab of wood, which gave it a nice touch. The salad included a scene that really looked like a lush forest. After our first course, we then moved onto a dish called “Bread of the Forest 2010,” which was a batter that was added to a scorching hot earthenware pot to and sort of steamed and baked at the same time. After cooking for a while, the bread came out in little buns. It sort of reminded me of a steamed Chinese bun, but with more fruity tones and flavors. Both the bread and the presentation at Narisawa were fantastic. Another amazing thing was even the butter was coated in a dark colored crumblings and something that looked like moss so it really took on a forest look.

One of the specialities of chef Yoshihiro Narisawa is his soil soup, a dish that he literally makes from the soil that he gets from Okinawa. It really did have a soil flavor to it, but at the same time it really worked – it was extremely earthy, and just tasted so natural, yet so good at the same time. One of my favorite courses of the meat was the “Langoustine from Suruga Bay,” a beautiful langoustine, similar to a small lobster, but I think it is actually a type of crayfish. The meat of the langoustine at Narisawa was unbelievable, so succulent and the meat was incredibly sweet as well. It literally melted in my mouth. Next we had a course of “Ash 2009” Scene of the seashore,” which was an entire squid topped in a sauce literally made from ash of the seashore. I don’t even begin to know how he made it, but both the squid and the sauce was incredible. The sauce was again, earthy and rich, and just so well done.

Next up at Narisawa Tokyo we enjoyed a seafood soup of a few different types of seafood, another just marvelous dish with extremely high quality ingredients. Next was a “Spanish mackerel, Hagi-Buckwheat-Root vegetable,” The highlight of the mackerel was how it was smoked in a glass cover, and it had the most amazing smoky flavor, maybe I’ve ever had. Next up we had “Monk fish from Ishikawa,” and again it was stunning – the fish was great quality and it was so buttery.

While everything I ate at Narisawa Tokyo was stunning, no other dish made me as excited as the “Sumi 2009” Kobe beef.” The beef was cooked by spooning hot olive oil over it for 30 minutes, so just the outside had a char to it while the inside meat was so pure and melted in my mouth like no other piece of meat ever had.

Note: This video was filmed and edited back in March of 2014. The menu has likely since changed, but the amazing cuisine and skills of the chef have not.

I didn’t pay for this meal myself, I was sponsored by Chowzter.com (http://chowzter.com/) of which I’m the Bangkok representative. Thank you to Chowzter and to Chef Yoshihiro Narisawa for this extremely memorable meal.

Thank you all for watching this video, hope you enjoyed it.

How to spend a weekend in Seville
Reimagined Luxury on The Kohala Coast, Mauna Lani, Auberge Resorts Collection
Here’s How Everyone In New York City Can Get Free Lunch On Tuesday
Abbott Strikes Deal With FDA To Reopen Baby Formula Plant At Center Of National Shortage
Unusual new superyacht concept has a giant glass eye