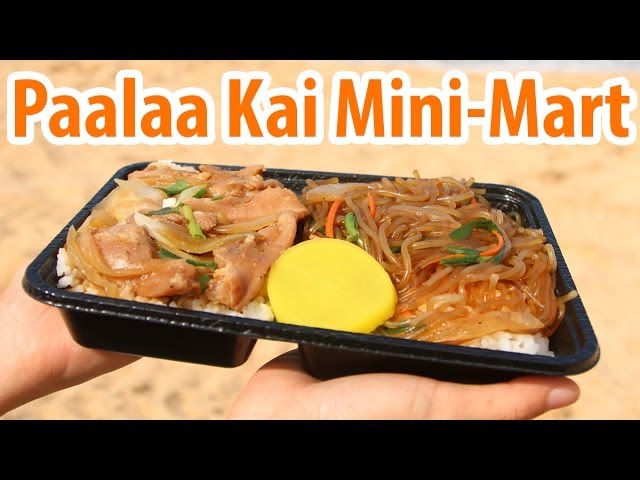 One of the best things to do when you’re in Hawaii is stop by a small little local restaurant to pick up local Hawaiian food and head to the beach. When I’m in Haleiwa, I have to make the short drive to Waialua, to go to a small hole in the wall known as Paalaa Kai Mini Mart, which is located right next to the famous bakery by the same name.

Inside of the mini mart there are all sorts of goodies to choose from. There’s the full assortment of foods and drinks available at any convenience store, but the real attraction at Paalaa Kai Mini Mart is the beautiful range of pre-made things to eat. As soon as you step foot in the store, you’ll get it a whiff of fried chicken. Their fried chicken is one of their claims to fame, and you can’t go there without getting one or a few pieces of their fried chicken. Along with fried chicken, there’s a bunch of different kinds of bentos already packaged and waiting for you. Many of the foods are Hawaiian style Korean dishes, as the owners are Korean in origin. They also have a fridge full of fresh poke, and sashimi, as well as smoked marlin and a few other fish, but I have yet to try those.

So anyway we headed into Paalaa Kai Mini Mart, and after a little bit of contemplation, I decided to buy a couple of spam musubis, and a bento filled with rice, chicken, and Korean glass noodle salad. After buying my food, I could not resist taking a bite of the spam musubi, as soon as I got in the car. I thought I would just take one bite and then drive to the beach, but it was so good I had to eat the whole thing right then and there. After finishing that off, we then took a drive over to Waimea Bay, where we found a nice place to sit and enjoy the rest of our beach food takeaway from Paalaa Kai Mini Mart.

If you happen to visit the North Shore of Oahu in Hawaii, and are looking for a good local Hawaiian food shop, be sure to drop by Paalaa Kai Mini Mart for some pretty tasty things to eat – and don’t miss out on their spam musubi.

Music in this video courtesy of Audio Network

Thank you so much for watching this food and travel video by Mark Wiens. Don’t forget to subscribe so you don’t miss my next tasty adventure. You can subscribe right here: http://www.youtube.com/subscription_center?add_user=migrationology

Air travel is making a strong comeback, but Asia is lagging behind, IATA says
U.S. airline bookings dropped 17% in April as flights got even more expensive
Fivelements Bali: A Luxury Sanctuary of Spiritualism, Spa and Sustainability
Investors Have ‘Nowhere To Hide’ As S&P 500 Nears Bear Market Territory
United Airlines says FAA has cleared 52 Boeing 777s to fly again after they were grounded for engine failure