Here we go again. After the Easter holidays were marred by staggering airport queues and a raft of flight cancellations, half term has also kicked off with a large dose of stress for holidaymakers.

Last Friday, easyJet cancelled 240 departures up until June 6, while British Airways axed 140 scheduled flights from Heathrow (though many of these cancellations were announced in advance). Tui has also cut around a quarter of its flights from Manchester until the end of June.

Meanwhile, significant queues have been reported at Gatwick, Manchester, Bristol and Birmingham, as airports across the country continue to grapple with the post-pandemic increase in passenger numbers.

Here we run through how to minimise your chance of getting caught up in the chaos, and what to do if your flight is delayed or cancelled this bank holiday.

What’s causing all of the problems at airports?

Two years of heavy travel restrictions have created a huge amount of pent-up demand. Now that virtually all obstacles have been removed there has been an unprecedented surge of bookings for this week, which combines both the school half term and the double bank holiday for the Jubilee.

Airports and airlines, which shed thousands of staff during the pandemic, simply haven’t got back up to speed quickly enough, and delays are being caused because of staff shortages in all areas – from security personnel to baggage handlers, cabin crew and check-in staff. It has combined to form a perfect storm of flight cancellations and delays at the airport which is making travel a misery at the moment.

Which airports are facing the most chaos?

Passengers have been forced to contend with queues, flight delays and cancellations over the past few days, ruining family holidays and causing high levels of travel anxiety. Here is what to expect at the UK airports where significant problems have been reported this bank holiday weekend.

Passengers at Bristol airport have taken to social media to complain about having to queue to even enter the airport terminal in recent days. One traveller, who claimed to have arrived at the airport at 5am, tweeted that it took over two hours to pass through check-in and security, despite the early hour.

Bristol airport apologised to customers for the lengthy wait times, and said the staff are “working hard” to provide travellers with a “smooth and easy” journey. 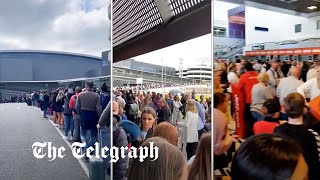 However, the airport has suggested that anxious passengers arriving excessively early for flights is increasing the delays. Bristol’s head of customer operations, Richard Thomasson, said: “For early morning flight departures we are seeing customers arriving five hours prior to flight departure, adding to the congestion in the terminal. This is something we have not experienced before.”

The airport predicts around 300,000 customers are expected to fly in and out of Bristol over the half-term with numbers expected to peak at over 30,000 per day.

The UK’s third busiest airport received the most attention over the Easter holidays after reports of seven-hour security queues, with passengers forced to navigate stifling heat and piles of uncleared vomit. And half term has got off to a rocky start with reported flight delays and queues of nearly three hours at check-in. One passenger told BBC News he was stuck at the airport for 11 hours before his flight to Greece was eventually cancelled.

Travellers also complained that some airport food and drink outlets ran out of supplies amid the chaos, with one social media user calling the scene “carnage”.

Piling on the misery, tour operator Tui has now taken the decision to cancel 43 flights a week from Manchester for the rest of June – roughly a quarter of its services. The move is expected to affect around 37,000 holidaymakers.

@manairport what an absolute shambles. Never seen anything run as poorly. All passengers flying out of Manchester today should have a refund. Carnage.

Certainly not immune from the chaos, Gatwick has seen a string of cancelled flights. Last Friday, easyJet cancelled more than 200 flights to or from the airport over a 10-day period. This move translated to 32 axed flights from Gatwick on May 30, many to key European holiday destinations such as Barcelona, Lisbon and Venice. Two departures yesterday (to Rome and Seville) were cancelled only an hour before their scheduled departure times.

Large queues have been reported in recent days but it should be noted that experiences vary wildly. Travel consultant Paul Charles tweeted on Tuesday morning that there were “no queues” at the South Terminal adding that “security channels [were] flowing smoothly.”

Which airlines are worst affected?

EasyJet and Tui have cancelled the most flights at short notice this half term. British Airways has also trimmed its schedule significantly, though many of its cancellations were announced weeks in advance.

Following the confirmation of its raft of Manchester cancellations, a spokesman for Tui said: “We would like to apologise to our customers who have experienced flight delays and cancellations in recent days and understand that many of our customers have been looking forward to their holiday with us for a long time.”

Should I avoid booking flights with a budget airline?

Whether you booked your flight with a budget carrier or long-established airline doesn’t seem to have much bearing on whether it will be cancelled. Ryanair has seen relatively few cancellations, for example, while British Airways has cut a large number of flights.

Are queues worse in the morning?

As more flights tend to take off in the morning, it follows that this time of day would see the most queues. However, there is no guarantee that evenings would see significantly shorter waiting times, particularly if less staff are on duty.

Should I make myself known to security or push in at the front of the queue if time is tight?

During the last round of travel chaos at Easter, airports such as Manchester put a system in place to expedite passengers whose flights were departing imminently, and it has become an increasingly widespread practice. If time is tight, do try and alert a member of staff to your predicament. However, there is no guarantee you will be fast-tracked, particularly if you are queuing outside the terminal and there is no staff member in sight.

Where is the best place to find information if my flight is delayed?

Passengers have reported a bewildering lack of information when their flights have been delayed. While it is always worth trying to track down a representative from the airline, a good hack is tracking the inbound flight on a site like flightstats.com. This will give you the clearest, quickest information on how long your own flight will be delayed

When should I arrive at the airport?

Some airlines have taken to emailing customers advising them to arrive three hours before departure, even for short-haul flights. However, early birds should be warned that some airports will only allow you to go through security, or to drop your bags, four hours before departure. And as outlined above, Bristol airport has claimed that too many early arrivals has have added to the chaos.

For those determined to arrive at the crack of dawn, Heathrow’s check-in desks and security usually opens at 4am, while at Gatwick’s North Terminal security opens at 2am.

For those worried about potential queues, certain airports allow passengers to pay for fast-track security (which costs £4 at Manchester and £5 at Stansted). However, in the current circumstances there is no guarantee you’ll sail through – passengers at Manchester previously reported two-hour waits, even in the fast lane.

What should I do if check-in or security delays mean I miss my flight?

An increasing number of passengers have claimed to have missed flights due to airport wait times in recent months.

Unfortunately, airports are not legally required to help or compensate passengers who miss flights due to bag-drop or security delays. They may try and transfer you to another flight, though there is no guarantee of this.

More robust travel insurance policies might cover your predicament, if you can prove you travelled to the airport sufficiently early.

What shall I do if my flight is delayed or cancelled?

For delays of three hours or more which are the fault of the airline, you are entitled to a cash payment of £220 for short flights and £350 for a flight of 1,500–3,500km. For flights over 3,500km you should receive £520 for a delay of three to four hours. You don’t have to take the flight if it’s delayed for five hours or more, and will be entitled to a full refund within seven days. However, compensation does not apply in all cases.

How can I salvage my holiday if my flight is cancelled?

While availability is certainly tight, there are still options if your flight is cancelled. If you are determined to jet off abroad (and willing to think outside the box), use flight comparison website Skyscanner’s ‘search everywhere’ to find bargain routes. This weekend the southern French city of Rodez can be reached for £89 return, while flights to Sweden’s sixth-largest city of Örebro are only £64.

In Britain, try calling holiday rental companies to see if there have been any last-minute cancellations. Some companies, such as Cornwall’s Latitude 50, post any late availability on Twitter.

So far no problems have been reported on cross Channel routes, though services are expected to be very busy and passengers are advised to arrive in good time.

Will these problems come back during the summer?

It is difficult to predict whether these problems will persist into the summer holidays, but clearly the situation has not significantly improved since Easter. Many airlines, including British Airways, have started a huge recruitment drive, which might help ease the problems, but perhaps not in time for summer.

It is also worth noting that this is not a uniquely British problem. Huge numbers of domestic flights have been cancelled across the US, while lengthy wait times have been reported at Amsterdam’s Schiphol airport.

So far no significant problems have been reported on cross-Channel routes, though services are extremely busy and passengers are advised to arrive in good time. And with queues reportedly snaking out of St Pancras on Tuesday morning, there could well be issues ahead.

Eurostar passengers are entitled to some compensation if the train is more than 60 minutes delayed. See compensation.eurostar.com for more information.

When will UK roads be busiest over the Jubilee bank holiday period?

Staycationers may be feeling smug about missing out on airport chaos but they may still have to contend with extremely busy UK roads over the Jubilee bank holiday.

New figures from the RAC suggest an estimated 20 million leisure trips will be made between Wednesday and Sunday. Friday is predicted to be the most congested day on the roads as day-trippers combine with families returning home from half-term breaks.

Meanwhile, data from transportation analytics specialists INRIX suggests that early starts or postponing journeys until later in the day could be the best way of avoiding any queues, with major roads expected to be particularly busy between 10am and 3pm.

To break up what may be a painful journey, why not explore the best places to stop off close to Britain’s busiest motorways.

Has your travel been disrupted this week? Comment below to join the conversation

World’s Best 9 New Gins Tried And Tested
Airfares, hotel rates and rental car prices fell in July. Here’s how you can score a good deal
Taco Bell And Milk Bar Are Collaborating On A New Dessert
Fascinating new time lapse of Kilauea Volcano from Big Island of Hawaii
The 20 Mediterranean islands you must visit in your lifetime