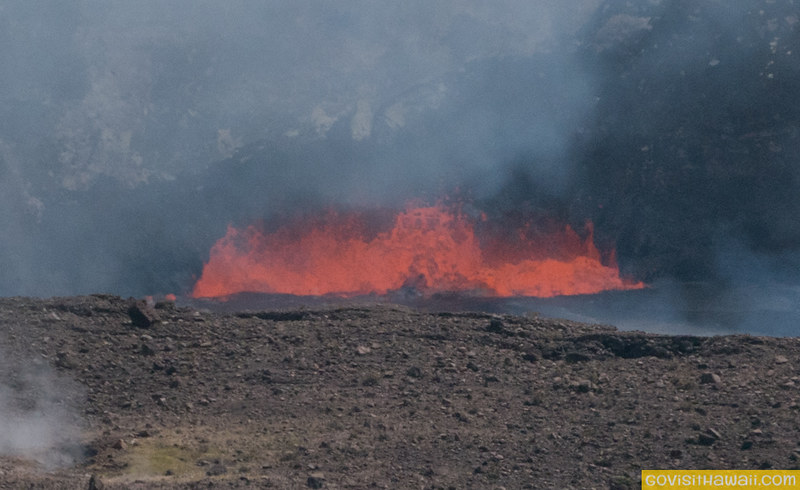 Kilauea Volcano has been the most active volcano in Hawaii in recent decades. Kilauea has changed where it erupts and how vigorously it erupts many, many times. Mostly, the evidence of changes are visible above ground, but sometimes earthquakes indicate subterranean shifts of magma. With each shift, the volcano leaves behind a different landscape. Just looking back on the past two to three years, Kilauea erupted dramatically, paused for two years and then returned erupting again.

Halema’uma’u Crater is at the summit area of Kilauea. It’s located within Hawaii Volcanoes National Park. This crater held a lava lake for almost a decade before it drained and the magma shifted in May 2018. The crater collapsed. The magma shifted to incredible lava fissures in the Puna region of the island. In the summer of 2018, a literal river of lava flowed from Kilauea. See the following stunning video for footage of that.

Then just months later, after all that activity, Kilauea took a big break from erupting for over two years. In December 2020, the lava lake returned to Halema’uma’u Crater. This article provides a great description along with photos showing those changes to Halema’uma’u.

The December 2020 eruption at Halema’uma’u lasted about six months before the volcano went on another pause until the end of September 2021, when it erupted again. Since then, Kilauea has been producing lava inside the crater. Currently, this eruption can be observed at Hawaii Volcanoes National Park.

Okay, now that we’ve covered the recent history of Halema’uma’u, let’s look at the fascinating, newly released, time lapse images of Halema’uma’u provided by the USGS Hawaiian Volcano Observatory. It’s incredible to see how the lava lake keeps raising in the following video:

You can read more and view interactive photos of Halema’uma’u at this USGS link.

Have you witnessed volcano activity on your visits to Hawaii’s, Big Island?